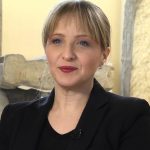 Marija’s journalism career began in 1998 at the Radio of Montenegro. From 2002 - 2003 she worked as editor-in-chief of the Montenegrin MINA news agency. She was a journalist and editor of the News of Sarajevo Canton Television from 2003 to 2004. Since 2004, she works in the Radio Free Europe offices in Sarajevo, as a reporter and news editor. She is also the editor and head of TV Liberty.