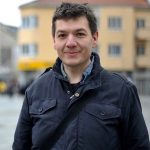 Some key questions to ask when analyzing the role of the objective local media in BiH is: How marginalized are those outlets that are reporting to the public and do they serve any other purpose than that of marketing and political promotion?
May 25th, 2018