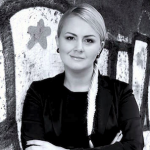 Velma Šarić is Editor-in-Chief at Balkan Diskurs. She is a trained journalist and graduate of the BBC reporting school. Velma has dedicated her 14-year career to investigative reporting in the Western Balkans. She has worked as a court reporter for the Institute for War and Peace Reporting (IWPR), Balkan Investigative Reporting Network, and Association of Court reporters in Bosnia and Herzegovina. As a freelance journalist, she has collaborated with: Al Jazeera, BBC, PBS, National Geographic, Süddeutsche Zeitung, The New York Times, La Repbulica, Le Monde, The Guardian, The Observer, Neue Zürcher Zeitung, TV Espana, Danish TV 2, and Deutsche Welle.

Vital Voices: Investing in Women for a Better Tomorrow

On every professional path there are roadblocks. When working in human rights and peacebuilding in a post-conflict society, these roadblocks can be particularly numerous. In the constant struggle to continue moving forward, a network of supporters and mentors is truly invaluable.
March 29th, 2017

The next collective funeral in Vlasenica will be held on 18 April this year for five murdered civilians. The youngest identified victim is Edis Hajdarević, who was seven at the time of his murder. Vlasenica is a small town located in Eastern Bosnia. According to the 1991 census, 55% of the population was Muslim and …
April 17th, 2015