At first glance it’s easy to mistake Bosnia-Herzegovina’s media landscape as one of promise. With a constitution that guarantees freedom of the press, a large number of media outlets, and a financially independent regulatory body, the small Balkan country performs relatively well by South East European standards.

But on closer inspection such freedoms are a mere façade, hiding this divided, post-war state’s continued struggle with a highly polarized and politicized media. Despite appearances, many of the fundamental aspects of media freedom face significant challenges in this divided country and, according to recent reports, the situation is only worsening.

Lejla, Nataša, Sara and Elma live their lives within this decline. All in their early to mid-twenties, they represent a generation that had little to do with the war but bear the burdens of its legacy nonetheless. All four are full-time students, but in their spare time they’re working towards a fairer, freer future across Bosnia as a local correspondent for Balkan Diskurs.

“The media is in the hands of the government. Certain persons dictate which news to publish, how much, and so on,” explains Nataša, from Bijeljina, the second largest city in predominantly Bosnian Serb Republika Srpska, one of the country’s two constituent entities. Sara, from Jajce confirms that her impression of media within her entity, the predominantly Bosniak and Bosnian Croat Federation of Bosnia and Herzegovina is the same, “They should be working for public benefit, [but] they are mostly just an extended arm of parties and political elites.”

Such criticisms will come as little to those who have been tracking the state of media freedom in Bosnia. Index on Censorship’s Mapping Media Freedom project, Freedom House and Reporters Without Borders have pointed to mounting levels of political pressure and media partisanship. Such pressure takes a variety of forms, but largely stems from the country’s ongoing ethnic and political cleavages. Many media outlets, including Bosnia’s three public broadcasters, are organized along ethnic lines, whilst some are aligned, openly affiliated or funded by specific political parties or figures.

As a consequence, skewed media coverage is commonplace and corruption and crime often goes unreported. As Lejla explains: “Many things happening in Visoko are never reported in media, for reasons unknown to me, and those are not small things either – for example there were multiple shootings last month and very little was written about it.” Media bias, she added, “is most obvious though when political topics from the Federation and Republika Srpska are compared.”

The International Criminal Tribunal for the former Yugoslavia is a regular victim of such political bias. Much of the local media coverage of the Tribunal is skewed and selective. For example, during the closing days of the case against Radovan Karadžić, the Sarajevo-based Dnevni Avaz focused on the prosecution’s charges against the former Bosnian Serb politician, whilst Banja Luka-based Nezavisne Novine focused solely on his defense and protestations of innocence. Furthermore, only a handful of independent organizations in Republika Srpska are known to report on trials within Bosnia’s local War Crimes Court.

Equally as worrying is the fate of those who resist such political pressures. It is not uncommon for journalists and media outlets in both of Bosnia’s constituent entities to face harassment from political, religious, and business leaders. Last December, Republika Srpska’s anti-corruption police raided the Sarajevo headquarters of Klix.ba, with the aim of identifying the source of a recording posted on the news. Nor are Bosnia’s regulatory agencies immune, as demonstrated by a spate of unidentified attacks against the country’s press council in 2014.

Political pressure is not the only threat to the freedom of the media in Bosnia. The country’s deteriorating economic situation also presents serious challenge. “Journalists sell their names for trinkets, I guess due to lack of other options or because they are used to taking the easy way out,” Elma explains. “I have witnessed various manipulations in Tešanj by local ‘wannabe journalists’ who publish every single piece of information that lands into their inbox without checking it, not being aware of the consequences,“ she adds.
This thoughtless reproduction of news frequently leads to the rapid spread of false information throughout Bosnia-Herzegovina, as demonstrated by the whirlwind of stories surrounding Bosnia’s protests last spring. This phenomenon is only exacerbated by a strong culture of social media use and low levels of media literacy. “The problem is anyone who has internet access can start their own portal or a Facebook page where they will write whatever they want in anyway they see fit… and many people lack critical thinking,” says Elma.

This sad truth has a silver lining though, and is one to which all four women subscribe through their work with Balkan Diskurs and within their local communities: Bosnia’s citizens also have the potential to change the media landscape. “Thinking with your own head and not being a sponge that soaks up everything that is offered [are important],” claims Elma.

Meanwhile her colleagues underline the promise of independent media in terms of media freedom. “Balkan Diskurs gives my voice an opportunity to be heard, so that stories that others keep quiet about can be told, to present my town in a different, more real light. That opportunity, for me, is priceless,” concludes Lejla.

This article was originally published at indexoncensorship.org 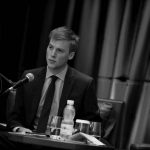 Tim Bidey is interests and expertise focus on the planning, development and evaluation of arts-based peacebuilding initiatives, fostered through his education at the University of York’s Post-war Reconstruction and Development Unit (PRDU). He enjoys working on oral and visual storytelling projects and has also written for a number of online publications including Insight on Conflict, Emergency Journalism and Index on Censorship.

The Art of Peace: Bosnia-Herzegovina

"While art cannot stop a bullet, it can perhaps prevent one from being fired in the first place." - William Kelley
March 17th, 2015