Through love and spirituality, unencumbered by form, writer Esma Bandić is trying to bring together people of different religions. Her books call for peace, love, and interfaith dialogue.

Esma Bandić has written ten books – four novels, a pentalogy, and a poetry collection. “These books unite people of all religions, for love is in the heart of every person,” said Bandić, adding that even though her books might have different focuses, they all lead to enlightenment.

Bandić was awarded the Fra Grgo Matić literary prize and her novel “The Sultan’s Decree” was chosen as the best novel among more than 90 submitted manuscripts by the “Arte” publishing house in Belgrade.

Her books are full of Biblical and Qur’anic references and Bandić shared part of her writings and poetry, as well as her thoughts on interfaith dialogue, with Balkan Diskurs youth correspondent Jasmila Talić-Kujundžić.

Jasmila Talić-Kujundžić (JTK): In what way do your books unite people of different religions?

Esma Bandić (EB): I’ve spoken to my readers who are followers of different religions and who are spiritually open, and I realized that they all found the same thread throughout my work. That thread is the examination of the human essence and how to face it. Where did we come from and where are we going? What is it in our genes that makes us human and not devils or angels? What are the commonalities between us all, and why should love be emphasized as the highest principle of life? Božena, a lady I met, told her friend that she learned more from my books than from the things her friends were telling her over the years: “You always receive the messages ‘you should, you have to, you must’… but Esma doesn’t do that.” There is choice, there is desire, there is love. There is the story of a man and his possibilities, about flying, about rising above. About the “fall” which is never truly a fall once you soar because a bird remains a bird forever – alive, dead, trampled, murdered, with torn or broken wings – it will always be a bird, because it is tied to the Spirit. And that connection to the Spirit is why my books bring people of different religions together.

JTK: Are people understanding of your desire to spread love?

EB: Unfortunately, religious people are not, a priori, as spiritually open as one might think. This is because most of them, in my opinion, accept religion only formally, rather than with their hearts and souls, and that results in many problems. In my novel “Seeking an Explanation” I write about this and about the existence of religious people who are not believers or, even worse, who are heartless. For this, I have been attacked and beaten and my books have been desecrated. My desire to spread love has been interpreted by many as an attack on their dogma, which is actually primitive behavior upheld under the mantle of faith and religion. It has even gone as far as people consciously working to deter others from socializing with me and reading my books, to anathematize my name and my work.

Fortunately, my books have their own path and evil tongues cannot stop this. In addition to the awards and recognition I’ve received, is the enthusiasm of my readers who have discovered and transformed themselves. They were able to self reflect. They were inspired and happy. And they cried because my books were able to reveal to them truths about themselves. Isn’t that victory? A visitor at one of my book promotions publicly stated that I’ve become her spiritual leader through my writings. Isn’t she enough to claim victory? Not for myself, but for love in its highest form!

JTK: In August of last year you attended an interfaith meeting in Sinj, Croatia. How did that go, and how many opportunities are there for similar events in this region?

EB: My experience at the interfaith meeting in Sinj, which was held to mark the 300th anniversary of Sinjska Alka, was among the most beautiful I’ve ever had on this journey of mine. We were welcomed with the utmost respect and interest. During my introduction, the president of the Association for the Promotion of Contemporary Art, Božena Romac, read my poem about ašk [ašk, or aşk, is a word of Arabic origin meaning to love, or, in its Turkish form ‘aşık’, to be in love]:

I must teach you a new word

I must, my soul is urging me from inside

I must, the heart obeys the soul

You say: I don’t understand

It means: I love you

In all the languages of the world

Friar Domagoj Runje, who received his doctorate at the Vatican and is a professor at the Catholic Faculty of Theology at the University of Split, spoke about the Battle of Sinj in a new light of interreligious harmony. He told the story of how both armies saw the Virgin Mary, or Maryam depending on their religion, at a key moment of the battle, moving both sides to opt for peace.

One can see the hill with the statue of Our Lady of Sinj from the spot where the presentations were held. But no one was bothered that I, a Muslim woman wearing a hijab, stood there reading excerpts from my books.

Professor Zlata Pestar, who teaches World Religions at the First Gymnasium of Zagreb, spoke about young people’s interest in different cultures and religions and showed slides of her students visiting various sacred buildings. We were so warmly welcomed in Sinj that I still feel the warmth and inspiring enthusiasm.

So, why is it that in our society, there are so few meetings like this one? The answer is clear –because individual consciousness is becoming more of a collective consciousness in our region!

JTK: In your last book, “Seeking an Explanation”, you write about converting from one religion to another and about the individual experience of religion. Do you think people are ready to move away from formalities and to devote themselves to spiritual essence?

EB: If a convert does not conform to the environment in which he lives, he experiences great problems and temptations. People forget that the person converts to a religion and not to the environment, and every environment carries different versions of a religion. It has been said that Islam alone has 73 factions. What does that mean for the Muslim convert? That he must convert to the faction that exists in the place in which he lives? Is that what converting to another religion is? If so, then it is not a path to God but a pathetic desire to fit into a community. Once a man converts, suddenly a hundred nets of formal principles are cast upon him and everyone tries to convince him of their correctness. If they fail to capture him, they wave their hands in frustration and declare him an unsuccessful convert.

In the last 12 years since I changed my name, and the few years since I’ve been in the public eye as a writer, my experience has shown me that it is very difficult to move people away from formalism no matter how much they are faced with irregularities or become aware of possible alternatives. There are many reasons for this, but the most important is probably that the dogma with which they were raised has been drilled into them like a spine. The process of rejecting imposed dogmatic principles is so difficult that many people simply give up. They give up because they would have to relinquish something, to sacrifice something, which is another reason many run away from spirituality – for spirituality is not the hunt for earthly, material, or tangible treasures, but for immaterial, spiritual, inner ones, which are, for them, abstract and uninteresting.

JTK: Do you still want to establish an association that focuses on interfaith dialogue?

EB: Definitely, God willing. I will not give up on that. The association “Visionaries” has already been registered. Now all that is left is to find a space so that after the holidays we can start working. Several stakeholders are looking forward the start of this initiative, and we’ve established the association’s assembly, chosen a president, secretary, advisor, and all the other necessary basics.

JTK: What is it like to fight utilizing art and the written word? Does it give you the opportunity to build peace and have a positive influence? Is literature a suitable “tool” for this goal?

EB: My answer to this question will be a poem from my book “The Descendants’ Spirit of Loving” (the poem is written by the character Arif for his love Milica, and was inspired by Jacques Prevert and his love Barbara):

You tell me of Barbara, my friend

You say to me: “Remember”, because so says the poet’s translator

We talk about war and about Brest

And I beg you, tell me of snow even if you call it something different

Because I will understand

How could I not understand

When my soul has a translator

How could I not remember the war when Brest was destroyed

How could I not remember the peace when Brest was built

We are crystals that don’t have the same imprint

But we can see our reflections in each other

Because we love the same arts and the same words

We love all languages and all the letters of love

So please, help me uncover the secret

The secret of the imprint

Left in my soul 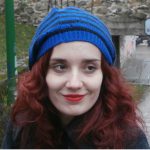 Jasmila Talić-Kujundžić is a Balkan Diskurs trained youth correspondent from Zenica. She holds a Master’s degree in Psychology from the Faculty of Philosophy in Sarajevo. Jasmila works as an editor for the magazine "Preventeen" and as an associate at the children's daycare center "Gnijezdo".

“Transitions”: The artistic process to depict the journey from conflict to peace

Transitional Justice is a term uttered across societies; the concept of creating a just peace as a means to a lasting peace. But what does this term, easily explained in academic and legal terms, mean ‘on the ground’?
July 7th, 2017