Mostar is famous for its Old Bridge, but also, sadly, for ethnic divisions and a dysfunctional government that hasn’t held elections for 12 years. Now is the time for Mostar to stand up and show that something can be changed. With local elections scheduled for 20 December 2020, one of the 14 priorities for the country’s application for European Union (EU) membership has finally been satisfied.

Mostar is a unique city. The conflict from 1992-1995 continues to affect different parts of life there. Administratively speaking, the city has been divided into two autonomous parts – East and West, Croat and Bosniak. Interaction between the two parts is almost nonexistent, apart from semi-integrated schools which still experience a kind of ethnic segregation. History classes in schools are such that each ethnic group is given different “facts” about the war. The division is also clear in the city’s two electricity companies, two phone networks, two postal services, two utility services, and two universities.

Mostar was one of the most ethnically integrated cities in the former Yugoslavia until the war. But extreme nationalism managed to destroy and divide the city. The division of the city was considered a victory for nationalists, and culminated in the destruction of the Old Bridge, which was, and is now after its reconstruction in 2004, the symbol of Mostar. The dividing line today is similar to the front line during the war.

Mostar is the only municipality in Bosnia and Herzegovina (BiH) in which local elections have not been held since 2008. In 2010, Bosnia’s Constitutional Court declared the city’s electoral statute unconstitutional. The reason for this decision was inconsistencies in the Election Act of 2001. The Constitutional Court gave the relevant authorities six months to harmonize the inconsistent provisions. However, the judgement has still not been implemented. As a consequence, in 2012 the Constitutional Court adopted a ruling on the non-implementation which essentially invalidated those provisions of the Act.

Since then, it has been impossible to agree upon the adoption of a new law. In the meantime, Mostar has been run by an acting mayor from the Croatian Democratic Union (HDZ), whose administration did not have a democratic mandate. Martin Bago, director of NGO Futura and head of the NGO Network “Our Society,” told Euronews that the lack of a city council has left the mayor’s office unchecked, allowing it to do as it pleases.

In October 2019, the European Court of Human Rights ordered Bosnia and Herzegovina to amend legislation and allow elections in Mostar. Irma Baralija, president of the Mostar branch of Naša Stranka, sued the state of Bosnia and Herzegovina because it was impossible for her, a politician living in Mostar, to vote or run for office. The European Court of Human Rights ruled in her favor, finding that the failure of Bosnian authorities to enforce the Bosnian Constitutional Court’s 2010 ruling has created a legal catastrophe.

Numerous problems in Mostar’s electoral system have stalled change. There are six electoral constituencies in Mostar which elect the same number of representatives to the city council. This is based on the pre-war 1991 census, despite the division of the city and other demographic changes since then. In addition, there are power-sharing mechanisms like ethnic parity and the indirect election of the mayor. All of this has made vetoes and political stalemates the norm. For years, the two major parties, HDZ and the Bosniak-led Party of Democratic Action (SDA), have not been able to agree on reforming the necessary provisions. SDA has lobbied to divide the city into several voting municipalities, while HDZ has stood for the principle “one man, one vote,” relying on the fact that Mostar now has a Croat majority.

The Council of Europe and the EU have put local elections in Mostar and improvements to the electoral system in its conditionality program for BiH’s EU membership. In the European Commission’s 2019 Opinion on BiH’s membership application, the EU listed 14 key priorities. The first was ensuring elections were conducted in line with European standards. Therefore, elections in Mostar are crucial for BiH’s path to the EU. This was also made clear in a joint statement by the EU’s High Representative and Vice-President, Josep Borrell, and the Neighborhood and Enlargement Commissioner, Olivér Várhelyi.

The Council of Europe has long been aware of the situation in Mostar. The Congress of Local and Regional Authorities decided, during its session in October 2017, to establish a Reflection Group on Mostar. The group sought sustainable solutions for restoring local democracy in the city and visited it a number of times. Recently, a major project on participatory democracy was launched by the Council of Europe, aimed at strengthening citizens’ involvement in politics.

Mostar was originally exempted from local elections on 15 November 2020. But a last-minute political deal sign under international mediation has enabled the state election commission to set December 20 as the date for voting in Mostar. Željko Bakalar, President of the Central Election Commission of Bosnia and Herzegovina, wrote the proposal to hold elections in Mostar on December 20. SDA and HDZ signed the compromise agreement on the 17 June 2020 after several weeks of renewed talks. The agreement established a new electoral system based on proportionally on the number of voters in the constituencies. In July 2020, a new Election Law passed through the Parliamentary Assembly of BiH and was finally enacted.

More specifically, the new system will establish a city council with 35 members elected via two ballots. One for the entire city of Mostar will elect 13 members under a single proportional representation system. The other will elect 22 members from six constituencies, as detailed in an interview with Professor Suad Arnautović for the Heinrich Böll Stiftung.

At the local level, representatives of five political parties (SDA, SBB, DF, SBiH, BPS) that are part of the Coalition for Mostar 2020 signed a Platform and Principles for Joint Action in August 2020. This should also be a significant step forward towards a unified city.

This agreement was signed by Slaven Željko and Salem Marić, presidents of HDZ and SDA in Mostar, and by national SDA leader Bakir Izetbegović and his HDZ counterpart, Dragan Čović. The signing was attended by UK Ambassador Matthew Field and the Head of the EU delegation, Johann Sattler. Čović stated that “the two sides would now initiate a legislative process to change Bosnia’s electoral law as soon as possible.” Izetbegović said that the agreement on the new statute, which will be adopted at the first session of the city council, was a compromise that foresees joint management of the city. He added that it was the only possible solution.

The two parties also signed an agreement before the next general election in 2022 to resolve other issues that have strained their relations, such as representation in the upper chamber of the Federation entity parliament, the House of Peoples. In this chamber, the parties hold power together. Another issue discussed was the election of the Croat member of Bosnia’s three-member Presidency, which Bosnian Croats have long complained is elected by the Bosniak majority in the Federation rather than themselves, despite the fact that he or she is meant to be their representative.

Different organizations have expressed their opinions on the agreements. The OSCE Mission to Bosnia and Herzegovina, for example, actively supports local inter-party dialogue. It has expressed the need for ongoing dialogue during and after the election and stressed the need to actively control the elections to prevent fraud. Ambassador Kathleen Kavalec, Head of the OSCE Mission to Bosnia and Herzegovina, called upon community and religious leaders to continue the dialogue and consider citizens’ requests going forward.

Irma Baralija as the one who brought the case to Strasbourg, stresses that international pressure will play an important role in the reforms. The EU’s Opinion on BiH’s application for membership has helped encourage change so far. But the EU can do more, she says, to help bridge ethnic divisions. “Representatives of the EU didn’t help much when they openly celebrated and served as witness to the agreement between only the two national parties in Mostar. There are many ways how the EU can help in strengthening democracy in Mostar. If there’s somebody who sincerely wants to help, at this point what we need the most is adequate assistance on the very Election Day, it would be crucial to make sure there is no electoral fraud,” she says, echoing Ambassador Kavalec.

Moreover, Baralija explains that the future of the city depends on the parties themselves. If national parties like HDZ and SDA obtain two thirds of the seats in the city council, Mostar will be even more divided in the future. In this case, each party will still effectively control its own side and could possibly exploit divisions. This is why she is pessimistic. Her party and other opposition leaders are trying to create a non-divided city instead.

Less pessimistic is Boris Čović, a Mostar resident who believes that the compromise could finally change the situation in Mostar. He says local elections could be the first step to making this happen.

Elections in Mostar depend on solving the nationalism that still affects the city. The lack of progress on elections so far suggests that international actors have not done enough for reconciliation in the Mostar. However, recent deals among the ruling parties could have a positive effect, as they aim to improve the electoral system. If the new laws succeed, this will be a step forward on BiH’s path towards the EU, and also a push towards a better society overall. Nonetheless, this will also depend on how and if the two parties can cooperate in the future. The EU and other international actors should therefore not only rely on political parties in BiH, but also connect directly with its citizens, who are ready for change.

European Commission, Communication from the Commission to the European Parliament and the Council, “Commission Opinion on Bosnia and Herzegovina’s application for membership of the European Union”, https://ec.europa.eu/neighbourhood-enlargement/sites/near/files/20190529-bosnia-and-herzegovina-opinion.pdf, 2019.

European Commission, Commission Staff Working Document, Analytical Report in: Communication from the Commission to the European Parliament and the Council, “Commission Opinion on Bosnia and Herzegovina’s application for membership of the European Union”, https://ec.europa.eu/neighbourhood-enlargement/sites/near/files/20190529-bosnia-and-herzegovina-analytical-report.pdf, 2019.

Borges Anelise, „We are building foundations for the next conflict’: Scars of war still present in Bosnia”, Euronews, https://www.euronews.com/2020/02/17/we-are-building-foundations-for-the-next-conflict-scars-of-war-still-present-in-bosnia, 2020.

Brezar Aleksandar, “Inside Mostar, the Bosnian city that hasn’t had a local election in 12 years”, Euronews,

Council of Europe, “Situation in Mostar: Congress contribution in view of the October 2020 general local elections in Bosnia and Herzegovina”, Congress of Local and Regional Authorities, https://www.coe.int/en/web/congress/-/situation-in-mostar-congress-contribution-in-view-of-the-october-2020-general-local-elections-in-bosnia-and-herzegovina, 2020.

European Western Balkans, “Čović and Izetbegović about Mostar election: 90 per cent of things have been agreed”, https://europeanwesternbalkans.com/2020/06/11/covic-and-izetbegovic-about-mostar-election-90-per-cent-of-things-have-been-agreed/, 2020.

OSCE, “Head of OSCE Mission to Bosnia and Herzegovina concludes visit to Mostar and Stolac“, https://www.osce.org/mission-to-bosnia-and-herzegovina/464733, 2020. 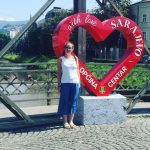 Federica, Italian and German, has recently graduated from College of Europe Natolin in European Interdisciplinary Studies, with a specialization in European History. This was her second master, following one in European Studies at Freie Universität Berlin. In between she has lived six months in Sarajevo, being able to get closer to the country. Her interest in the Balkans and especially in Bosnia has developed throughout the years: during her studies, she developed a focus on war crimes and international tribunals, dealing with the past and reconciliation.