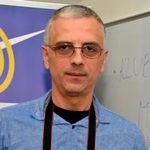 Mirsad Behram was born in Mostar in 1971. He has been in journalism since February 1994. He obtained a journalism degree in October 2003 from the Faculty of Political Science in Sarajevo and finished the BBC/Deutsche Welle School of Journalism in Prague in October 1994. He received a BBC-trainer of journalism certificate in April 2001. Mirsad has worked for The Voice of America, Associated Press, Westdeutscher Rundfunk, Radio of Bosnia and Herzegovina, TV BiH, and RTV Mostar, and has published his work in the War Report, The Liberation, and Dnevni Avaz. In 2007, on an invitation from the US government, he filmed a TV documentary series, called “Differences in USA”. He speaks English and French and has been a correspondent for Radio Free Europe since October 2012.