“Crossing Borders” is a multi-part series aims to explore various facets of Bosnian migration to Germany and to present the personal accounts of migrants and their children in an effort to not only reflect on the shared experiences of Bosnian migrants but to also consider the wider themes and implications of their stories.

“Crossing Borders” is a multi-part series that aims to explore various facets of Bosnian migration to Germany and to present the personal accounts of migrants and their children in an effort to not only reflect on the shared experiences of Bosnian migrants but to also consider the wider themes and implications of their stories.

From the late 1960’s to today, Germany and Bosnia and Herzegovina (BiH), once a republic of the former Yugoslavia, have maintained a stable and strong bilateral relationship. Immigration policies and agreements, including guest worker arrangements, significant refugee admission during the 1990s Bosnian conflict, student exchange programs, and multiple waves of labor migration are responsible for a substantial portion of this ongoing relationship. As a result, Germany now possesses one of the most vibrant and sizeable Bosnian diaspora populations in the world: approximately 248,000 individuals of Bosnian origin, of whom around 76,000 are second-generation Bosnians. While migrants have primarily flowed from BiH to Germany, this steady flow of migration has had deep cultural, political and economic implications for both countries.

The first marked inflow of migrants with non-German ancestry began during the second half of the 1950s when, as a result of the post-war economic boom, West Germany began recruiting foreign labor through a series of bilateral agreements. Low birthrates, both during and immediately after World War II, meant that the number of young Germans entering the workforce was in decline. Furthermore, the rise in the average education levels of West Germans influenced a shift in the labor force from blue-collar to white-collar work.[1] Add to these factors a growing market economy and the loss of labor from East Germany, and it becomes clear that West Germany was facing an impending labor shortage, particularly for manual and unskilled labor.[2]

In 1968, West Germany signed a bilateral guest worker agreement with Yugoslavia, marking the first historic wave of migration from the region. By that time, similar agreements with countries such as Spain, Turkey, and Greece had been underway for nearly a decade and were revealing marked success.[3] The 1968 agreement allowed for the recruitment of over a half million Yugoslav workers during the initial five-year period, benefitting both countries by increasing remittances to Yugoslavia and thus raising economic standards at home, while also resolving supply and demand for workers in both countries.[4] Many of the initial labor migrants had low levels of education and hailed primarily from economically depressed, rural areas of Yugoslavia.

Throughout the 1980s, Yugoslavs were Germany’s second largest migrant population, often assimilating and achieving higher social standing in comparison to other migrant groups.[5] Within both German and Yugoslav circles, members of these populations were referred to as Jugovići and Jugošvaben, respectively, connoting their combined identities. Jugovići typically denoted guest workers from Yugoslavia, while Jugošvabe implied a certain level of assimilation into Germany society. Second-generation Yugoslavs became Jugošvaben, combining the words Yugo and Schwabe, a colloquial Yugoslav term used for German peoples. Comparatively, in former Yugoslavia, they were often referred to as ‘Švabe‘ or ‘Gastarbajteri,’ playing on the same terms.[6] The fact that these terms made their way into the lexicon of both countries is further proof of just how prevalent these phenomena were. In particular, the words Jugošvabe and Jugošvaben illustrate how common it was for guest workers to remain and to establish families in Germany, despite Germany’s initial policy, which intended for workers to eventually return to their homelands.[7]

Germany received the highest number of Bosnian refugees during the 1992 – 1995 conflict: approximately 320,000.[8] While the majority of these refugees eventually returned to BiH or moved to third-destination countries, those who stayed continue to rebuild their lives, raise children, and, often, maintain strong community ties amongst each other. Like guest workers who migrated to Germany from Yugoslavia, Bosnians living in Germany today are key contributors to the country’s economy and are also one of the most integrated and civically-engaged migrant groups in the country, with a number of community members who have either run for or held political office. In addition, the number of second-generation Bosnians combined with the recent influx of economic migrants and exchange students brings the average age of the population to around 22.5.[9]

Today, the three Länder (German provinces) with the highest numbers of Bosnians are Bavaria and North Rhine-Westphalia (each around 63,000) and Baden-Württemberg (47,000). There are also sizeable populations in Berlin and Hesse (around 22,000 each), with smaller populations in Lower Saxony (8,000), Rhineland-Palatinate (7,000), and Hamburg (6,000).[10]

Approximately 28,000 people of Bosnian descent are official German citizens, but, until recently, it was necessary for immigrants acquiring German citizenship to give up their other nationality. As a result, around 13,000 individuals have given up their BiH citizenship since 2009. However, new legislation allows children born on or after 1 January 2000 to non-German parents the option to hold dual citizenship if certain requirements are met, including that the child has lived in Germany for at least eight years or attended school for six years before they reach the age of 21. Of the estimated 10,000 people who currently hold dual citizenship, approximately 80% were born in Germany.[11]

The policy changes related to dual citizenship can have potential political implications for both Germany and BiH. For example, the likelihood that the number of dual Bosnian-German citizens will increase as those born since 2000 reach the age of 18 may result in increased participation in activities such as external voting in Bosnian elections. The BiH state is in the process of creating a comprehensive diaspora outreach strategy as well as creating a representative diaspora body in Germany that would help to connect this population with Bosnian institutions and governments. Although it is in a nascent stage, it demonstrates an engagement that has previously not existed between the homeland and its population abroad.

Another recent change in policy was enacted due to the number of asylum requests from the Western Balkans. In response, Germany changed its law to permit an increase in the number of work permits allotted during the period from October 2015 to 2020 to individuals from the region. These conditions have made it easier for Bosnian citizens to obtain permission to work in Germany and have resulted in the issuance of 7,110 work permits in 2016. This reflects a significant increase from 2,022 in 2015 and a continued rise in the number of permits is expected.[12]

Also on the rise is the number of individuals that are changing their official residence from BiH to Germany. According to the BiH Migration Profile, an annual report issued by the BiH Ministry of Security’s Sector for Immigration, 1,196 Bosnian individuals changed their residence to Germany in 2016, which denotes a significant increase from 244 in 2012, 672 in 2013, 910 in 2014, and 998 in 2015.

Through these historical migration trends, cultural indicators, and statistics, we can see the breadth and depth of the Bosnian diaspora’s presence in Germany. In the forthcoming article series, we will be exploring the human faces behind these policies and numbers. By telling the stories of Bosnians who have made lives for themselves in Germany, we will trace the common struggles and successes that members of these migrant populations have experienced along their journeys. The series will also aim to uncover broader themes and lessons learned in order to contribute to the ongoing dialogue about how to improve migrant integration effort.

The “Crossing Borders” series has been produced as part of an Intercultural Innovation Award alumni partnership between the Post-Conflict Research Center and Give Something Back to Berlin. Support for this series has been provided by the United Nations Alliance of Civilization (UNAOC) and the BMW Group. 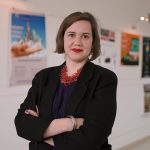 Dženeta Karabegović's wider research interests are rooted in international and comparative politics with a particular focus on trans-nationalism, diaspora, migration, democratization, human rights, transitional justice, and the Balkans. She holds a Ph.D. in Politics and International Studies from the University of Warwick, UK. Her academic work has been published in multiple peer-reviewed academic journals and she is currently working on both article and book-length projects. She is an Assistant Professor at the International Burch University and the Sarajevo School for Science and Technology and works as a Program Consultant for the Post-Conflict Research Center. Previously, she was a Guest Researcher at Mid-Sweden University's Forum for Gender Studies and a Visiting Scholar at the Harriman Institute at Columbia University. She was a U.S. Fulbright Fellow at the Hugo Valentin Centre at Uppsala University in Sweden, holds an M.A. in International Relations from the University of Chicago, and completed her B.A. (Hons) at the University of Vermont in Political Science and German with a Holocaust Studies minor. Dženeta was born in Banja Luka, BiH, grew up in Germany and the United States, has lived in Sweden and England, and has recently returned to Sarajevo, BiH.

Judicial Legacies: The Siege of Sarajevo and Crimes Committed in Serb-Controlled Municipalities

The Sarajevo Canton Memorial Fund and the Post-Conflict Research Center (PCRC) recently released a scientific report entitled “The Siege of Sarajevo from 1992 to 1995,” based upon the relevant court judgements. It documents the sniping and shelling of the city as well as the war crimes committed in eight municipalities, with the aim of promoting greater acceptance of judicially established facts and countering the denial of the crimes carried out against Sarajevo civilians.
September 26th, 2022

One response to “Crossing Borders: An Introduction to Bosnian Migration to Germany (Part I)”