Since the end of the war, mines in Bosnia and Herzegovina (BiH) have been a major problem. According to the latest available data, despite numerous actions warning of unexploded ordnance (UXO), hundreds of people have been killed in mine accidents in BiH.

The demining process has been going on since 1996, but the problem has not been fully resolved. Mustafa Kadribegović, assistant director of the head of the sector for the organization of demining and destruction of UXO, told Balkan Diskurs that after the war, mines posed a great danger in cities like Mostar and Sarajevo and that despite some progress, there is still a ways to go.

According to him, from 1998 to 2020, about three-quarters of the suspicious area was demined. He claims that there are many more mines in the Federation of Bosnia and Herzegovina (FBiH) than in the Republika Srpska (RS), and the new deadline for completing the demining process in BiH is March 2027.

According to the Law on Demining in BiH, Kadribegović states, the maintenance and management of the central database on minefields is the responsibility of the Mine Action Center in BiH (BH MAC).

Data for 2021 will be shared after the end of the demining season.

Speaking about the situation in the country, Kadribegović recalls that a few years after the war in BiH, many urban parts of Sarajevo, Mostar, Gornji Vakuf-Uskoplje, Bihać, and other cities in BiH were mined and represented a danger to citizens.

“Unfortunately, many citizens were killed by mines after the war. It should be noted that mine damage still occurs today, only to a much lesser extent than in the post-war period. According to the first estimate from 1998, the suspected dangerous area for mines in BiH was about 4000.2 km2 or 8.2% of the total area of BiH. From 1998 to 2020, 3043 km² of the suspicious area was demined,” he explains.

They also plan to revise the existing Mine Action Strategy by 2023. He points out that after the end of the war in BiH, 619 people died, and 802 people were injured from UXO, which demonstrates that UXOs still pose a serious threat to the population of Bosnia and Herzegovina.

“The Federal Administration of Civil Protection receives between 5 and 10 reports of UXO sightings outside minefields daily. The Federal Civil Protection Administration teams are territorially distributed in the FBiH so that all cantons are covered by their work for the removal and destruction of explosives in an efficient manner. Mine clearance is a significantly different process and is done according to the annual demining work plan and the list of priorities proposed by BH MAC, and adopted by the entity governments and the Brčko District Government, i.e., the BiH Council of Ministers for BiH,” said Kadribegović.

According to him, about 60% of the remaining mine risk area in BiH is in forested areas, and the citizens have access to the application “BH Mine Suspected Areas,” which contains the locations suspected of mines. According to Kadribegović, this application is useful for anyone who moves near areas with potential mine danger to see their position relative to dangerous regions of BiH.

“The problem of unexploded ordinance is much bigger in BiH due to the nature of war activities from 1992 to 1995 – UXO is found every day in locations that were outside of hot conflict zones. It is important to know that unexploded ordnance left over from World War II is also often present and unexploded. We are trying to develop an awareness of the danger of mines and UXO starting from primary schools in BiH to some particularly risky categories such as forestry workers, mountaineers, hunters, fishermen, and the like,” he concludes.

The application “BH Mine Suspected Areas” can be downloaded on Google Play or the BH MAC website (www.bhmac.org). 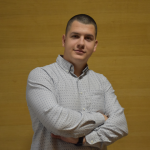 Vedad is a trained Balkan Diskurs correspondent in Sarajevo. He is a third-year student at the Faculty of Political Sciences, University of Sarajevo. He currently works as a digital marketing mentor, digital marketing manager, and WordPress developer, with a special interest in Google analytics. He is also a youth activist and a member of the PRONI organization.

Balkan Diskurs correspondent Struan Kennedy provides a review of three films that were recently shown at Ars Aevi Museum of Contemporary Art in Sarajevo as part of a retrospective of the work of French filmmaker Jean-Gabriel Périot.
July 28th, 2017