Two ordinary families of different ethnicities from villages near Kiseljak and Visoko were connected during the war—not only by the struggle for survival, great uncertainty, and waiting, but also by a togetherness, and humanity that overcame the futility of the war.

A hill divides the villages of Gomionica and Liješevo which provided a path of salvation for many people during the war, including the Mujagić family. They found refuge with Catholic Croats, for whom ethnicity was not a measure of humanity. These two families ended up sharing the last crumbs of bread.

After the forces of the HVO (Croatian Defense Council) carried out a military attack on the civilian population in part of Kiseljak Municipality in the spring of 1993, the Mujagić family of four left the majority Muslim village of Gomionica. “To save our lives, we were forced to leave our home like many other families. Everything my parents had built went up in flames. My bicycle, my sister’s sled, my mother’s embroidery from her childhood, pictures, memories, all gone in one day under the pretence of defending the Croatian people. I remember that my mother locked the house and brought the key, and we often joked about that later,” says Amela Mujagić, who was 13 years old when she left the village of Gomionica with her parents and sister.

They found salvation in the house of the three-member Mišković family, in the village of Liješevo in Visoko municipality. “Without them, we would have ended up on the street or in some overcrowded collective accommodation with terrible conditions—in other words, what looked like concentration camps. The Croats drove us away from our home, only for other Croats to offer us accommodation and shelter,” Amela explained.

For about one year, the Mujagić and Mišković families shared not only a house, but also the fear, anxiety, and other uncertainties of the war. Afterwards, the Mišković family ceded their house, which belonged to Nikola’s brother in Switzerland, to the Mujagić family. Both sides say that their relationship provided normalcy above all, in what was a very abnormal time. They helped each other as much as they could.

“The only motive for helping others was that there were people around me who needed help. Neither my wife nor I have ever looked at ‘who is who,’ at their nationality and religion. These are irrelevant to us. During the war, we helped as many people as much as we could. I would do the same again. We lived nicely with the Mujagićs. I considered them part of the family. They were very good people, and after the war, we remained good friends. Although there was war, we also have fond memories of that time. It would be much better if everyone lived and got along like us,” said Nikola Mišković.

Ana, Nikola’s wife, said that people got so used to war and its difficulties that they even started making jokes about it.  “I often remember making maslenica [pastry with butter] and halva [confections] with Asifa and Džemila. We drank coffee together, talked, and laughed. Asifa once said to me over coffee, ‘Oh, Ana, look at us, it’s as if there’s not a war,’” she said.

The Mišković family was one of the few who did not want to leave their home and continued to live among the majority Bosniak population.

“For ‘theirs’ [Croats], they were traitors, and for ‘ours’ [Bosniaks], they were ‘theirs.’ Soldiers often passed this way because it led to the front lines, and they almost always yelled derogatory things and often death threats, yelling that they would burn down the house. And that was the price of our stay there – they gave us a roof over our heads, and in return, we gave them some kind of guarantee that no one would touch them or set fire to the house while they slept. The absurdities of war really have no bounds,” said Amela.

Amela, the youngest resident at the time, remembers the period spent with the Mišković family well. She explains how they each knew exactly how much bread they could eat each day, and she vividly remembers sneaking into the kitchen with her sister during the night in search of more bread. Another event has remained in her memory: “My uncle miraculously managed to send a package from Germany. I think there was a radio program called ‘Broken Connections,’ and he managed to locate us through that. In the package, there were 24 chocolates: 12 dairy and 12 hazelnut chocolates. We couldn’t even see chocolate on TV at the time because for the most part there was no electricity. Ah, 24 chocolates—to experience so much joy was indescribable! And shampoo, real shampoo, not the one my mom made from God knows what. He also sent real toothpaste, finally, instead of baking soda. Oh, that was a moment to remember from the war.”

Amela’s mother, Džemila Mujagić, said that the most difficult thing for her was that they were left without everything they had acquired and that they were far from their home and hometown. “We were afraid for each other. We were afraid of hunger, unrest, bad news. We just waited for everything to end and dreamed of returning home alive and well. In any case, we luckily managed to keep our health and life, but also because we lived with good people,” said Džemila.

The story of these two families shows that there was coexistence existed during the war. They all agree that the war was meaningless and unnecessary and that a person is not defined by ethnic or religious affiliation. “Ordinary, kind people did not want a war, but they weren’t asked about it,” both families believe. Their stories testify to the fact that the real heroes of every war are the ordinary people who help each other without thinking about identities or differences.

There are certainly many untold war stories in Bosnia and Herzegovina about ordinary heroes for whom all that mattered was whether or not one was a good person. Their heroism lies in the fact that they did not resort to hatred or anger, even in the most difficult moments. They show us why we should reject the futility of war, in favor of the solidarity of love. 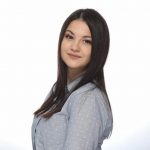 Merjema is a trained Balkan Diskurs correspondent from Visoko. She is a student of International Relations and European Studies at the International Burch University in Sarajevo. Since primary school, she has been involved in activism, working on various projects on peer violence and environmental problems. From 2020 to 2021, she volunteered at the PRONI youth organization. Her interests lie primarily in politics, diplomacy, social activism, and international relations. She loves to travel, meet new people, and learn about different cultures.

Discovering the Meaning of Life through Art

A mixed media artist with a special talent for illustration and digital art, his works are exhibited in art galleries, institutions and public spaces around the world, from Sarajevo and Mostar, to Berlin, New York, Miami, Los Angeles and Taiwan. His works Madness Continuous and Depth were selected by the Platform for Contemporary Art and presented in New York’s famous Times Square.
March 25th, 2022

An Association Fighting for the Rights of Children with Disabilities

A group of citizens dissatisfied with the rights that their children receive in the area of Herzegovina-Neretva Canton (HNK) founded the association Roditelji djece sa invaliditetom (“Parenting Children with Disabilities”) with the hope of increasing awareness among competent institutions of the issues children with disabilities face.
December 9th, 2022