In the far corner of the cavernous hall of the former car battery factory, there is a photograph of a man in a bright orange jacket. He has deep, kind eyes. I stood staring at his face, then at the item of clothing he held in his hands, and back into his eyes.  I was rooted to the ground, listening to his story narrated in my ears. I had heard his story before. In fact, I had read and re-read it dozens of times already. But, as I listened to Ahmed Ustić’s Death March story, there was no way of quelling the strange paralysis that I had felt when I first read the account of this young man’s horrifying six-day journey for survival.

About a month before that moment, I was handed the immense responsibility, along with my colleague Alexandra, of working on the English translations of the Memento exhibition stories. I say responsibility, because there is no other way to describe the feeling of being presented with such personal accounts – of painful memories, of loss and agony, of lives left devastated – to examine and edit. The responsibility of simply reading women tell of their murdered children and husbands, of the near starvation experienced as refugees, is immense.

Memento is an oral history project curated by the Post-Conflict Research Center and the Srebrenica-Potočari Memorial Centre. It brings together personal objects and personal stories that attest to the struggle for survival that took place in Srebrenica in 1995, as a methodically-planned and swiftly-executed genocide was carried out.  Large panels carry the portraits of ten women survivors – those from Srebrenica and the surrounds whose relatives were murdered in the genocide – and ten men who survived the Death March – the long journey on foot from Srebrenica to the Free Territory. Their haunting survival stories are told through audio headsets, and, along with their portraits, we see objects both belonging to the Death March survivors themselves, or left behind by murdered loved ones.

Velma Šarić, PCRC’s founder and director, explains how they were able to use the Memorial Center’s database of victims’ families and survivors to find the storytellers, working closely also with associations of mothers of Srebrenica and a group of Death March survivors. With the help of fixer Enver Šehović, himself a survivor, each one of the 30 subjects were interviewed twice by Saric, the stories meticulously fact-checked and compiled with the guidance of oral history experts, before being whittled down to the final 20 stories.

The objects – some of the many donated to the Memorial Center by family and survivors – were the inspiration for the multimedia exhibition. Those whose stories form the exhibition, the people who donated these precious objects, attended a private visit before the public opening. In the words of Šarić, this exhibition gives their loved ones a voice and a name, rather than being just a number and a statistic.  “I think that is the most crucial part of this project,” she adds. “It was emotionally tough for the subjects to see and hear their stories told, but they were thankful that they were being told in this way.”  The exhibition will be permanently displayed in the Memorial center and transferred soon to an online portal for those unable to visit the site itself.

The simplicity of the portraits, taken by exhibition photographer Armin Durgut, reflects the starkness of the bare walls they border on the northern side of the old factory. Take a headset and listen, and you are stilled.  Stilled by the men’s retelling of days of walking, unarmed, through forests and across rivers, under almost constant bombardment; of friends and brothers, fathers and grandfathers, killed on the way; of the gruesome horrors witnessed. Stilled by stories of women left alone in the world, faced only with the search for dismembered remains.

The preservation of such stories is powerful beyond measure. Genocide scholar Dr Gregory H. Stanton, in a webinar organized by the team behind the Sto te nema commemorative monument, urged us that stories, above all, are our most useful tool against genocide denial. Narrative is how we learn about the world, both as children and adults. All the more reason for me to feel that the task of weaving a flowing narrative out of the Srebrenica survivor interviews was a huge responsibility.

The exhibition will soon be available online – a crucial point of access in these difficult times of restricted movement.  As a permanent exhibition, however, it carves out a precious space and moment of memorialization. Spaces dedicated solely and exclusively to the memory of a past that must not be forgotten are invaluable. Such spaces of memory, of knowledge, of reflection, are often the product of more work and struggle than we ever see.

As Emir Suljagić, director of the Srebrenica-Potočari Memorial Centre reminds us, memorialization is an expensive endeavor.  Preserving and sharing the facts and the memory of what occurred in Srebrenica, of the people who were killed as well as those who survive, is especially expensive compared to the ease and swiftness with which the genocide took place. This is a past and a reality that must never be forgotten, especially in the face of rampant denial.  “If there is something that is perhaps a little closer to my heart than other segments of the commemoration, it is the Memento exhibition,” says Suljagić. Under his direction, this exhibition now means that human stories behind the everyday objects – the cigarette cases, the ID cards, the photographs – will forever be preserved.

I am grateful and moved for the small contribution I could make to this work. Watching people listen to the exhibition was a privilege: the burly bikers in their Marš Mira t-shirts, mothers and grandmothers in their white headscarves, whole families, small children, the subjects themselves – the people whose lives were, and remain, directly and forever darkened by the events of 25 years ago. The responsibility I had felt as I picked apart the grammar and turns of phrase transformed into utter humility, respect, and an overwhelming sense of privilege. As one of the very few foreigners present at the 25th genocide memorial, I will forever be humbled. I will forever carry the message that the genocide in Srebrenica was avoidable, that we must not forget it, and that the people of Srebrenica must not be left behind. We must listen to their stories and learn. 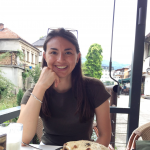 Hunadda is pursuing an MA in Conflict, Security and Development at the King’s College London and holds a BA in Modern Languages from the University of Cambridge. She has worked as a cultural analyst and communications professional, both in the private sector and at NGOs such as UNHCR. Her work and study have taken her across the world, from Paris to Toronto to Algiers, and she speaks French, Spanish, Arabic, Italian and Bosnian. Hunadda specialises in issues of refugees, migration and cross-cultural communication, and her fascination with the Western Balkans has developed over years of language study, travels to the region, and an academic interest in long-term post-conflict development.

Mahmut is a nine-year-old boy with autism. His mother, Samija, noticed he was having problems when he was just one and a half years old. Until that time, he had been developing like any typical child.
January 20th, 2020

In Bosnia and Herzegovina, one in three LGBT people have been victims of violence or extreme discrimination, but only every seventh incident has been reported to the police.
May 17th, 2015