Ivo Andrić is still the only Nobel laureate in literature from any of the former Yugoslav countries. His works were inspired by Bosnia, and on one occasion, he declared: “Bosnia is my spiritual homeland.” A permanent exhibition about his life and literary work is located in the Ivo Andrić Memorial Birthplace Museum in Travnik. One of the main features of the artistic and cultural expression of Bosnia and Herzegovina is contained within his works.

Enes Škrgo, Senior Curator at the Ivo Andrić Memorial Birthplace Museum, said that Andrić’s short stories and novels are equal to the aesthetic and cultural-historical value and significance of stećak tombstones, the motif of the Bosnian cross, sevdalinka, the paintings of Mersad Berber and Safet Zec, the poetry of Mak Dizdar and Aleksa Šantić, the novels of Meša Selimović, as well as the other important writers from BiH who wrote about their native land – that is, all the creations of the Bosnian and Herzegovinian spirit and its cultural symbols.

Bosnia and Herzegovina cannot be understood today without the insight of Andrić’s literature, which is read in schools as part of regular curriculum or as leisure reading. According to Škrgo, the Nobel Prize for Literature awarded to Andrić aroused the interest and drew the attention of readers to Bosnia and Herzegovina – the main theme of his literature, but a country which the world knew little about up until then.

“The literary work of Ivo Andrić has become an indispensable part of the world’s literary heritage, and this is already a sufficient reason for constantly reminding the public of the importance of his literary heritage. The background of the writer – a child who was raised in poverty but, thanks to his talent and dedication, achieved the highest artistic success at the world level, as well as the career of a top diplomat – today can be encouragement and inspiration for young people around the world,” said Škrgo.

Andrić was born on October 9th, 1892, in the Travnik village of Zenjak. Before his death, on August 30th, 1974, the reconstructed Ivo Andrić Birthplace Memorial Museum was opened with a permanent exhibition about his life and literary work, which is an annex of the Public Institution of the Travnik Regional Museum.

On March 13, 1975, the day of his death, the Travnik Regional Museum proposed before the Travnik Municipal Assembly that the name of the Memorial Museum be changed to the Ivo Andrić Memorial Birthplace Museum.

As Fatima Maslić, Director of the Travnik Regional Museum, says, the culture of remembering Andrić lives on through the annual work program of the Ivo Andrić Memorial Birthplace Museum. She explained that on October 9th, Andrić’s birthday, the month-long event “Andrić Days” begins. The initiator and organizer of the program for many years was the Travnik Regional Museum. Three years ago, the City Library of Travnik took over these activities.

“Paying tribute to the memory of the life and work of  Nobel laureate Ivo Andrić is important because he was born in Travnik and the main themes of his works – the novel Travnik Chronicle, the short stories The story of the Vizier’s elephant, A glass and others – are related to Travnik,” Maslić noted.

Recently, the Museum’s space was adapted and the permanent exhibition of the Ivo Andrić Memorial Birthplace Museum was completed. At the Museum’s initiative, musicians from Travnik promoted a DVD entitled “All that was Ever Mine is from Bosnia,” with the poems Glass, Diplomats Time, and Vizier’s Elephant.

A photo exhibition “Awarding the Nobel Prize for Literature to Ivo Andrić” was also established.

There was also a photography exhibition and the screening of a documentary film about the photo exhibition “Paths, Faces, Landscapes.”

According to Maslić, the program activities are also directed towards young people. Last year, as part of “Andrić Days,” workshops were organized for young people led by Ivan Lovrenović, Almir Imširević, Nenad Veličković, and Miralem Ovčina. The workshops were designed and organized by Škrgo.

For the people of Travnik, as Škrgo expalins, the Ivo Andrić Memorial Birthplace Museum is one of the most significant cultural and historical sites in the city. It is also one of the most important symbols of the cultural identity of Travnik citizens, and a main determinant of their municipal pride, as Andrić might say.

“In the Museum exhibition, the regional motifs in Ivo Andrić’s literary works are highlighted – as well as his Travnik Chronicle and The Story of the Vizier’s Elephant – as the most beautiful literary descriptions of the city and its inhabitants. They are a direct link between Andrić and the city that is not only his birthplace, but is included on the imaginary literary map of the world,” Škrgo emphasized. 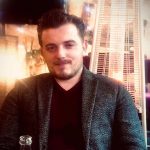 Enes is a trained Balkan Diskurs correspondent from Bugojno. He received a degree in teaching from the Faculty of Philosophy in Zenica and is currently doing an internship at the Third Primary School in Bugojno. He is also a volunteer at the Youth Center in Bugojno. During his studies in Zenica, he volunteered at the Elementary School Mak Dizdar as a teaching assistant for children with special educational needs. This was part of the project ,,Today a student, tomorrow an associate in working with children with special educational needs - using MULTIMEDIA MEANS to carve a path for knowledge."

My Heart is Full for Sarajevo: New Mission Calls Peacebuilder and Educator Tanya Domi Back to Bosnia

The young married couple Ines (33) and Mario (32) Zović from Zenica have been together for four years, married for the last three. Their love was capped off by the birth of their daughter Nora.
February 11th, 2021