An unstable and internally broken Europe, with border integrity under constant threat by a belligerent Russia, would prove detrimental to United States foreign policy, and would likely set back the progress made by all U.S. presidents since Ronald Reagan. Senior Fellow at the Center for European Policy Analysis (CEPA) in Washington, D.C. Janusz Bugajski presents his analysis.

During his presidential campaign, Trump questioned the value of NATO and the requisite financial contribution of its members to the common defense, as well as Europe’s dependence on the U.S. With this departure from former U.S. presidents’ historical support of NATO in mind, small and medium-sized states must assert themselves or face the danger of being ignored by the world’s superpowers as they navigate this new geopolitical environment.

This shared stake in regional politics is not just a result of past military action; the U.S. is also home to many generations of immigrants and refugees from Central and Eastern Europe, thus making ties between them even closer. Millions of Americans who come from the region are now concerned about the future of their mother countries. Since the collapse of communism and the disintegration of the Soviet bloc, most of these nations helped to defend U.S. security interests and its national values. This was exemplified through their military participation in numerous U.S.-led operations in Iraq, Afghanistan and the former Yugoslavia.

In contrast to Russia, most Central and Eastern European countries have been reliable allies and partners to the U.S., and they do not compete with the U.S. over territory, influence or resources. Given that Trump considers the U.S. to be his ”first priority”, the governments of Central and Eastern European countries must demonstrate that their security is vital to U.S. interests. Most leaders in the region agree that their top priority is to ensure the continuity of U.S. policy toward their countries. This includes a stronger NATO presence as a response to Russian revisionism, as well as completion of current U.S. military missions in countries in close proximity to Russia such as Poland and the Baltic countries.

Further, the leaders of Central and Eastern European countries should convince Washington to adopt a tougher diplomatic stance against Russian ”soft power” and subversion in the region. The White House must take into account that, historically, the regional policy of the Kremlin has been designed to replace pro-American governments and to, thus, undermine the interests of the United States.

If Central Europe once again falls under the influence of Moscow, the rest of Europe’s Western and pro-Western countries will be in danger of doing the same.

Officials of Central and Eastern Europe must make it clear to Washington that a U.S. demonstration of power can restrain the ambitions of Moscow more effectively than pressure applied by any regional government. The potentially affected countries of Eastern and Central Europe should also work together to prevent the drafting of any large-scale agreement between Washington and Moscow without their direct input, as this would undermine their collective security and sovereignty. Greater activism from regional officials will prove, through words and deeds, that they are still important U.S. allies.

Trump is focused on national independence, praising Brexit as an example. This principle can be applied to all countries of Central and Eastern Europe, not in the sense of leaving the European Union, but in the efforts to provide resistance to Russian provocations, subversion and intervention. Washington should pay attention to the fears and aspirations of each nation in order to avoid a spiral into regional conflicts or, at worst, another potential war.

On the economic front, Eastern Europe is a larger and more developed market than Russia and has a combined population of around 170 million consumers. Trump stressed the importance of business ties in the development of bilateral relations. Central and Eastern European countries now have a chance to display their potential for new U.S. investments. With regard to security, each country within Central and Eastern Europe should demonstrate its value as an ally by continuing to fulfill its obligations within NATO and with respect to its bilateral agreements with the U.S.

First, it is necessary for countries to allocate at least two percent of their GDP on defense, as set forth by NATO agreements. So far, only Poland and Estonia have met this standard, while other countries, including Romania, Latvia and Lithuania have pledged to increase spending in the coming years. The process needs to be accelerated so that the region is not seen as just a mere consumer of security.

Second, countries must focus on building national mechanisms to combat external aggression, so that Central and Eastern Europe states would not be stuck helplessly waiting for assistance from abroad if a conflict were to arise. This includes the development of effective territorial defense mechanisms, military modernization and targeted spending of defensive budgets for domestic security.

Finally, improved regional security cooperation is necessary in order to collectively confront external aggressors. This can include a combination of military units, intelligence sharing, joint air defense and a number of other initiatives. A more efficient regional defense strategy will likely encourage the U.S. to assist in the protection of inland borders, airspace and sea. In contrast, every capital in this part of Europe must help to defend all other NATO members, including the U.S., with the vigorous monitoring and neutralization of potential threats of terrorism. For the U.S., an unstable and internally broken Europe, with border integrity under constant threat by a belligerent Russia, would prove detrimental to its foreign policy, and would likely set back the progress made by all U.S. presidents since Ronald Reagan. Central and Eastern European countries are key allies to U.S. and Western European interests. As we have seen play out time and time again throughout Europe and the U.S., common peace is possible only through collective strength.

This article was originally published on portalanalitika.me 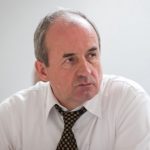 Janusz Bugajski is a Senior Fellow at the Center for European Policy Analysis (CEPA) in Washington, D.C. and host of the “New Bugajski Hour” television shows broadcast in the Balkans. Bugajski has authored 20 books on Europe, Russia, and trans-Atlantic relations and is a columnist for several media outlets.

For some time now, the public has criticized the ArcelorMittal steel plant in Zenica because of its direct ties to air pollution in this Bosnian-Herzegovinian town. Balkan Diskurs correspondent Adullah Kozlić spoke with ArcelorMittal's Environmental Protection Manager, Azra Sivro, about potential solutions to this problem, as well as the company's plans for the future.
May 31st, 2017

“For the dead and the living, we must bear witness.” – Elie Wiesel On April 30th, 2020, the Post Conflict Research Center (PCRC) and the Srebrenica Memorial Center partnered with the Together We Remember coalition to participate in a 24-Hour Virtual Global Vigil to commemorate victims of genocides and mass atrocities. For the event, several …
September 18th, 2020