How do we heal when the past is wrought with violence while the present offers perpetrators impunity and survivors little to nothing? Joshua Oppenheimer’s two films, The Act of Killing and The Look of Silence, each offer some insight into helping answer not only this question but the many questions that linger after incidents of genocide. His films, screened as part of the Sarajevo Film Festival’s Dealing with the Past project, served as a tribute to the filmmaker’s journey to provide answers to such questions.

In 2001, Joshua travelled to Indonesia to make a film about a community of oil palm plantation workers struggling to establish a union in the post-dictatorship climate. It was during this time that he began making The Act of Killing and The Look of Silence, both of which grapple with the post-genocidal legacy in Indonesia. The two films would eventually go on to win countless international awards and receive Oscar nominations.

The Perpetrators Then and Now

In 1965, the Indonesian government was overthrown by the military to establish a military dictatorship. Anyone opposed to the new regime under President Suharto was at risk of being labeled a communist and targeted for extermination. In the end, more than one million alleged communists, which included union members, farmers, ethnic Chinese, and intellectuals were captured, tortured, and murdered in a wave of mass killings. Though the killings lasted for only three months, those who committed the violence are still largely in power today. The Act of Killing follows a few of those gangsters, or “free men” as they call themselves, who carried out the genocidal acts just over forty years ago.

What is perhaps most startling as The Act of Killing begins is how the perpetrators openly and boastfully describe the horrific ways in which they tortured, brutalized, and eventually killed their victims. One of the first scenes features the film’s disconcertingly charismatic Anwar Congo revisiting where he used to murder “communists”. The former leader of a powerful death squad that operated in Northern Sumatra leads the camera around his office and to an outdoor patio where he casually describes how the executioners switched from slitting throats to strangling with wire, as slitting throats left too much blood and a bad smell. He then proceeds to wrap the wire around his fellow perpetrator confederate and demonstrates the method they used to strangle their victims. Later in the film, it is revealed that Anwar himself is estimated to have killed around 1,000 people. Many of those killings occurred on that outdoor patio. Though it may seem as if Anwar lives without remorse for the people he murdered, the film slowly reveals the cracks in this facade. In many ways, The Act of Killing functions as a meditation on how perpetrators live with themselves after committing such atrocious acts, and the ways in which they come to terms with their past as killers. Even at the outset of the film, Anwar speaks about how he turned to alcohol, drugs, and dancing as a way to avoid going crazy. As he cha-chas on the patio where he performed so many executions, he explains that they were “killing happily”, in some ways.

The Lies We Tell Ourselves

The screening of The Act of Killing was followed by a Q&A session, during which Oppenheimer spoke about the lies perpetrators must tell themselves in order to live with what they’ve done. He explained: “The human capacity for evil depends on our ability to lie to ourselves.” The film reveals these lies to the audience, while the process of making the film reveals this reality to Anwar and his perpetrator co-stars. Oppenheimer has uniquely structured the film so as to feature both unscripted documentation and scripted reenactments of the killings written by Anwar and the other perpetrators. These dramatizations reimagine interrogations, beheadings, and the pillaging of a village based on the perpetrators’ memories of those events.

Though it may be initially appalling that the perpetrators go about dramatizing their actions and boasting about the evil deeds they committed, it is slowly revealed that these are merely distractions; lies the perpetrators tell themselves to suppress the need to admit they have done something morally abhorrent. Their boasting is a form of escapism, through which they spend their days in avoidance of acknowledging the immorality of their actions. Oppenheimer explained, “The boasting of the perpetrators really is defensive,” and admitted to his audience, “When I boast I’m feeling small. I’m like a bird who’s puffing up my feathers to look bigger because I know I’m small.”

When viewed through this lens, the boastful nature of the perpetrators becomes less shocking and more understandable to the viewer as an expected psychological response to the murderous roles they once played. Furthermore, because those who committed the acts remain in control of the government, they have the power to rewrite the history in an effort to make their actions an easier pill to swallow. However, Oppenheimer asserts that their boasting and avoidance tactics do not provide real solutions to their subconscious sense of guilt, and “…most find that this cloud of shame and guilt worms its way into their sleep and gives them nightmares.” They spend their days trying to outrun their evil past, however, deep down, they know what they have done is wrong. Anwar reveals this truth, telling the camera about the recurring nightmares he often has.

A Capacity for Empathy Among Evil Doers?

As the film progresses, there are several instances in which we see a shift in Anwar. In one scene, he plays the role of a prisoner who is strangled with wire. There are two attempted takes of the strangling, both of which Anwar cuts short. He takes a break to catch his breath and get a drink of water, eventually deciding he no longer wants to attempt another reenactment the performance. Later, he addresses the filmmaker, asking, “Did the people I tortured feel the way I do here? I can feel what the people I tortured felt.”

During the Q&A, one audience member questioned whether these perpetrators had any empathy. Oppenheimer responded that their demonstrated struggle to cope with the atrocities they committed provides evidence that they, in fact, do possess the capacity for empathy. He goes on to say that he could not speculate about “what [he] would have done in 1965 if [he] had grown up in Anwar Congo’s family.”

Oppenheimer explained that he does not believe people are born monsters who lack empathy and that a large part of their actions may be attributable to incentive structures such as the feelings of self-worth Anwar obtained from living a gangster lifestyle. Incentives are just one of the many facets that can lead to an ordinary person’s devolution into a perpetrator of violence and genocide. Oppenheimer also explained to audience members how in Indonesia, and perhaps also in Bosnia and Herzegovina, perpetrators were often rewarded and encouraged to kill people and their families. And would wake up the next morning feeling sick with what they’ve done. To cope, the justifications and lies would begin. Then, when they were commanded to kill again, they had to in order to uphold the initial lie that they had used to justify the first killing.

Though this is no excuse for the actions of those perpetrators and in no way belittles the harm they caused their victims, it does provide some clues as to how and why ordinary people can be capable of committing acts of genocide and how to best go about healing a society suffering its traumatic after effects. As a whole, The Act of Killing draws attention to the intense psychological damage that is suffered by those who take part in genocide. It illustrates how both lying to oneself and lying to the society at large can provide fleeting relief, but in no way solves the underlying problems.

In the film’s final scene, Anwar returns to the patio where he executed so many. While attempting to once again recount his actions from more than twenty years ago, a very different man emerges—one that is physically sickened by the mere thought of what he’d done. His story is now continuously disrupted by his body’s physical response to the memories of that past and his uncontrollable retching renders him unable to continue. Stay tuned for Part II of this article series: Reconciliation as a Universal Concept: Reflections on Joshua Oppenheimer’s “The Look of Silence”

The Sarajevo Film Festival’s Dealing with the Past project is dedicated to increasing dialogue, promoting peace through raising awareness and confronting all the parties involved with indisputable facts. The project is supported by the Robert Bosch Stiftung Foundation and presented in partnership with Al Jazeera Balkans and the United States Embassy to Bosnia and Herzegovina. The Post-Conflict Research Center served as a local project partner through its Regional Civil Society Network for the Prevention of Genocide and Mass Atrocities. 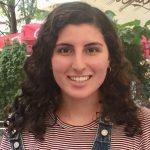 Katarina van Alebeek is a third-year undergraduate at Stanford University. She is pursuing a BA in Political Science with a concentration in Justice and Law. This past summer, van Alebeek conducted research on post-conflict societies in Bosnia and Herzegovina at the Sarajevo School of Science and Technology and at the Post-Conflict Research Center. Her areas of focus are transitional justice, reconciliation, and intergroup relations. She hopes to follow her interests in post-conflict societies by working in international human rights law.

ON.design: Concrete as a Decorative Material

A young architect from Sarajevo, Emina Arapčić (32), has been experimenting and working with concrete for a long time. ON.design emerged in 2016 as a project to bring together and showcase her work to a wider audience.
May 23rd, 2022