Italy was among the first countries in the international community to establish diplomatic relations with Bosnia and Herzegovina (BiH) following the war. The Italian Embassy in Sarajevo, officially established in November 1996, seeks to strengthen already good relations between Italy and BiH in trade, culture, medicine, education and other sectors, as well as to facilitate …

Italy was among the first countries in the international community to establish diplomatic relations with Bosnia and Herzegovina (BiH) following the war. The Italian Embassy in Sarajevo, officially established in November 1996, seeks to strengthen already good relations between Italy and BiH in trade, culture, medicine, education and other sectors, as well as to facilitate the process of building peace.

The main goals of Italian diplomacy, as stated by the Italian embassy in BiH, are strengthening bilateral relations between the two countries, promoting peace and stability in Bosnia and Herzegovina, and fostering the country’s integration into European and Atlantic international structures.

Italy is a member of the Steering Committee of the Peace Implementation Council (PIC), which is tasked with providing political direction to the High Representative in BiH. Italy’s efforts to help stabilize the country can also be seen at the military level, through EUFOR and NATO.

Along with close political cooperation, the economic and trade relations of these two countries are of great importance. According to the embassy, Italy was the first supplier to Bosnia, the first exporter, and the second overall trading partner in 2021 and throughout the first five months of 2022.

As stated by the Italian Ambassador, Marco di Ruzza, “Italy benefits from a very extensive and articulated network of enterprises in this country. These have long been established in the productive fabric of BiH in a very effective, adaptive, dynamic way in a variety of sectors.”

This economic collaboration can largely be explained by the geographical proximity of the two countries and the advantages in terms of energy and transport costs for investors. It is thanks to these favorable conditions that the development of typically Italian industries in BiH, such as the footwear, textiles, clothing, and metallurgy, was possible, and met with a genuine appreciation for the “Made in Italy” label. Moreover, Italy has a noteworthy role in the BiH banking system with its two banks, Unicredit and Intesa Sanpaolo.

In addition to the political and economic ties between the two countries, Italy has made significant contributions to development in BiH since the beginning of the war. In fact, Italy first provided medical and logistical assistance to the country in 1992 to help cope with the considerable number of refugees and wounded.

After the signing of the Dayton Agreement in 1995, Italy concentrated its resources mainly in the reconstruction and economic development sectors, contributing to the efforts of both international organizations and other countries. In recent years, Italy’s development cooperation has focused mainly on sectors such as rural development and institution building. For instance, in 2021, the Italian Agency for Development Cooperation (AICS) carried out 11 initiatives in Bosnia and Herzegovina, corresponding to 11,373,632 € in grants.

As the Ambassador states, “Through the AICS, a number of projects are financed with the aim of developing as much as possible the connections, bridges and links between the various communities.”

For example, one project that has received strong support is Via Dinarica, a platform designed to “develop dynamic, youth-friendly, sustainable forms of tourism to contribute to BiH’s economic balance, but also to enable BiH to utilize and enhance the extraordinary natural beauty that the country has to offer.”

The strong bilateral cooperation between the two countries is accompanied by a close cultural relationship. This is reflected in the various initiatives implemented since the Bilateral Cooperation Agreement in the Field of Culture, Education, and Sport, signed in 2004 and officially enacted in 2015.

A Bridge to the Film Season

In the field of education, for example, especially at the university level, the teaching of the Italian language is strongly encouraged, in particular thanks to an annual contribution provided by the Italian Ministry of Foreign Affairs and International Cooperation (MAECI). Other recent collaborations include the introduction of the “Radio Italia” program during the pandemic as well as the organization of three concerts by the Youth Orchestra created with the support of the Italian Embassy.

Italy and BiH are also connected through cinema. This could be seen during “Italian Cinema Days,” an event which was held between June 27th and July 3rd this year in major Bosnian cities like Sarajevo, Banja Luka, and Mostar.

Ambassador Di Ruzza acknowledges that the film selection seeks “to symbolically build a bridge to Sarajevo’s usual summer film season, an extraordinarily busy and dynamic period for the capital which sees directors and actors arriving from all over the region and numerous countries.”

There is also a great deal of artistic collaboration between Italy and BiH, which testifies to the close cultural relationship between the two countries which has existed since the end of the war. For instance, Italian artists and museums played a key role in the establishment of Ars Aevi, a project of the Sarajevo Museum of Contemporary Art. The project’s manifesto espouses the foundational beliefs that “Art can overcome evil and destruction,” “Culture is the mother of tolerance,” and that “Intercultural dialogue enriches.”

Over the years, artistic collaborations have been a frequent occurrence, and Claudio Malacarne’s recent exhibition at the National Gallery is the latest example.

According to the curator of the exhibition, Cesare Orler, the aim of Malacarne’s work is to represent “Mediterranean-ness.” He went on to explain that the exposition contains “figurative works ranging from southern Italian gardens to various aquatic scenes – swimming pools, lakes, water squares of various kinds – in which the subject is simply a pretext for painting. The real protagonists are the Mediterranean light and the bright, strongly contrasted colors.”

However, the hidden message behind Malacarne’s work is that there is a strong bond between human beings that can overcome hatred and war. This is the reason that the Italian Embassy strongly supported this exhibition, which simultaneously served to strengthen the cultural bridge between the two countries.

As Cesare Orler states, this was achieved not so much through the choice of the artist and his works, but rather through the exhibition itself. “A foreign embassy having the opportunity to exhibit in the National Gallery means that the Bosnian state has ceded its most prestigious space to give Italy the opportunity to engage in dialogue. I find this a strong and meaningful message, which is absolutely and urgently needed.”

Finally, through independent of political and economic partnerships, Italy seeks to contribute to the yet ongoing process of reconciliation in BiH. To this end, the Italian Embassy promotes inter-religious and inter-ethnic cooperation at the local level and creates opportunities for exchange and cultural development.

As Orler added, “the idea is that in times of despair, difficulty, and tragedy for one nation, another country can come to its rescue by offering a safe haven.”

Hopefully, such initiatives will continue and expand in the years to come, with far-reaching potential to positively impact a society still very much affected by the legacy of war. 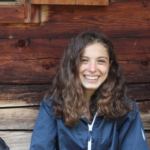 Serena is currently pursuing a bachelor’s degree in Political Science at the University of Sciences Po Paris specialized in Central and Eastern Europe. In her second year, having chosen the major in politics and government, she focused on subjects related to comparative politics in Eastern Europe and international law. After an exchange year at the Department of Social and Behavioural Sciences of the University of Amsterdam, she would like to pursue a master in Humanitarian Rights and international law. Her interest in transitional justice and humanitarian aid and her volunteer experiences led her to work at PCRC. After completing her studies she plans to work in the humanitarian sector.

Srebrenica Youth Summer School 2020/21: Even Peace Has its Victories

In 2020, the Post-Conflict Research Center (PCRC) and the Srebrenica Memorial Center began organizing a summer school for young people in Srebrenica. The first one, entitled ‘Dealing with the past to rethink the future’, was held in the period from July 8 to 13, 2020, while the second, called ‘Truth. Justice. Prevention.’, lasted from July 6 to 13, 2021.
April 22nd, 2022