In the aftermath of the Bosnian War, Bosnia-Herzegovina was nearly in shambles. The conflict had wreaked havoc on the national economy and crippled its financial infrastructure. Yet, by the turn of the 21st century, hundreds of Chinese immigrants began moving into the country, establishing kineska radnjas wherever they settled. At one point, these small general stores saturated the entire country and were considered an integral part of everyday life. Today, nearly all of them have disappeared.

As we headed towards Rajlovac from Buća Potok, our taxi driver pointed towards the nearby houses that lined the streets. “For seven kilometers, there were kineska radnjas at every second house. It was incredible; the Chinese were everywhere. Now, they are all leaving Bosnia,” he lamented. “Around fifteen years ago, everyone used to come here to shop. You’d park your car and just walk along the outlet mall.” It is almost impossible to imagine that this road was once considered an “unofficial Chinatown” by the natives of Bosnia-Herzegovina. Today, Bosnian auto shops, furniture stores, and grocers line the streets. Further exploration revealed faded hànzì (Chinese symbols) and rusted “KINESKA PRODAVNICA” (“CHINESE SHOP”) advertisements that serve as makeshift memorials of what was once a bustling ethnic enclave of Chinese immigrants and a heaven-on-earth for thrifty shoppers. Despite the fact that the hundreds of kineska radnjas (literally translated as “Chinese shops”) of Safeta Zajke have now been reduced to only a handful of stores, there are still many Chinese migrants who continue to live in Bosnia. These shop owners do not see this country merely as a place for profiteering. To many, Bosnia is their new home: a place to settle down, to start a family, and, even, to be buried.

Chinese Immigrants to Bosnia-Herzegovina: The Numbers

Despite an overall decrease in Chinese immigration from 2015 to 2016, the People’s Republic of China remains one of the largest sources of immigrants to Bosnia. According to the Ministry of Security’s Migration Profile for the Year 2016, the largest number of permanent residency permits was issued to Chinese applicants, who made up over 20% of the overall pool. In fact, the 161 granted permits in 2016 marked a 71.28% increase from the year prior. As the largest source of foreign-born permanent residents in Bosnia, China is unique from the next top nine sending countries and is the only country situated outside of Europe and the Middle East. Immigrants from China also make up a significant proportion of migrants whose residency permits were revoked in 2016. More interestingly, no Chinese residents in Bosnia have applied for citizenship since 2014. While immigration to Bosnia itself is unremarkable and has been continuous throughout history, the unique characteristic of Chinese immigration calls for deeper analysis.

Chinese presence in Bosnia has largely been discussed in terms of the overarching economic relationship between the two countries. Formalized financial cooperation has been in effect since 2012 through the “1+16” Framework, which refers to a number of agreements and mechanisms between the Central and Eastern European Countries (CEEC) and China. An example of this framework in action can be seen with the 350 million euro investment from the China Development Bank to help construct the controversial Stanari Thermal Power Plant located just outside of Banja Luka. A consequence of the transitional state of the economy, Bosnia’s financial instability and growing debt has drawn the attention of Chinese investors.

Bosnia has also implemented the expansion of Chinese tourism throughout its cities. Partnering with Serbia and Hungary, the country also began working on a joint program in early March 2017 to help facilitate Chinese tourism between the Balkan states. In addition to its geographical beauty and rich cultural history, Bosnia, and Sarajevo more specifically, is especially attractive to Chinese tourists given the overwhelming popularity of the 1972 Yugoslav film, Walter Defends Sarajevo. In addition to demonstrating the brotherhood and unity of the Yugoslav people during World War II, the film contains beautiful panoramas of the Sarajevan landscape. Having garnered such continued success with its Chinese audience, a remake of the film is currently in-production by China Star Media and is expected for release in the next few years.

Traditional discourse regarding the Chinese in Bosnia has consistently overlooked the presence of economic migrants who have been living in the country since the end of the Bosnian War. As is the case in many other parts of the world, Chinese immigrants can typically be characterized as entrepreneurial migrants, setting up family-run small businesses wherever they choose to settle. It can be easy for many Bosnian natives to take for granted the establishment of Chinese businesses throughout the country; the kineska radnja has already become akin to the general store.

Stepping into one of these kineska radnjas can be slightly disorienting given the incredible magnitude of items for sale. From Bosnian national flags to discount makeup, second-hand clothing to every electronic gadget imaginable, these stores are typically a cross between a pawnshop and a wholesale supplier. However, once you step into one kineska radnja, it is as though you have stepped into every kineska radnja; despite what initially appears to be an eclectic collection, it quickly becomes apparent that each store sells nearly identical goods. “Many of us [Chinese] come from the Zhejiang province. Every couple months, I return to China to pick up goods for my store and others,” said Xiaohui* from Wenzhou. Now in his mid-30s, he had not considered moving to Bosnia until he married his wife whose family had already set up a kineska radnja in Sarajevo in the early 2000s. He inherited his in-laws’ business and has now been running the store for the past six years. “Many Chinese are leaving Bosnia; they go back home [China] or they go to Tržnica Arizona in Bosnia’s Brčko District.” Citing a downturn in the economy and dwindling day-to-day business, Xiaohui worries about the future prospects of living in Bosnia. Despite the fact that his wife is a naturalized citizen, the couple has agreed that if they have children they will be raised in China, not in Bosnia.

Boqin* from Guangzhou, the 20-year-old niece of another kineska radnja owner, provides an additional reason why many Chinese migrants have decided to leave Sarajevo. Unlike her family’s business, other shop owners literally “packed up and left” as a result of accumulated debt owed to the government. She complains, “Many of us do not know how to deal with the taxation laws here. The government does not say anything. The embassy does not say anything. No one here explains any of it to us and then there is the language barrier as well.” The government’s failure to provide sufficient information about taxation policies or how those taxes will be spent has contributed to the mass exodus of kineski radnjas from Sarajevo; in order to avoid liability for enormous debts, many business owners have fled. “It is so peaceful here, but I am only here to work for my uncle. After I make enough money, I want to move back to China to start a family,” says Boqin. While older Chinese migrants find comfort in the peaceful environment and relaxed lifestyle of the region, their younger counterparts are more interested in returning to the bustling cities of urban China.

Grandmother Jun*, originally from Rui’an, has been in Bosnia for over fifteen years. Leaving her children back in China, she and her husband opened up their wholesale shoe store on Safeta Zajke at the turn of the last millennium. “After the war, the price of land was extremely cheap. Everyone from our city began moving over here because of the available opportunities,” says Jun. “I love it here. My son even moved here after he got married and brought my grandson.” When asked if her grandson would go to school in Bosnia, she expressed her preference that he go to a private school and, eventually, to an international college. None of the shopkeepers interviewed expressed an interest to send their children to a government-run public school in Bosnia.

The disappearance of the kineska radnja and of Chinese migrants from Bosnia is a bittersweet phenomenon. On one hand, the loss of Chinese general stores means that many consumers have lost access to cheap everyday goods. Issues related to taxation policy transparency and bureaucratic red tape are understood to be some of the primary factors driving out these Chinese businesses. As the country moves forward, the famous outlet malls comprised of kineska radnjas, such as that of the early 2000s on Safeta Zajke, exist only in memory. The ongoing emigration of the Chinese from Bosnia calls into question whether or not a “Chinatown” could ever be established in a similar fashion to those in her neighboring countries of Croatia and Serbia. On the other hand, the dwindling flow of Chinese migrants also has a silver lining. As the Bosnian economy continues to mature, larger corporations recognize the country’s investment potential. According to Jun, the establishment of private malls and businesses, like the BBI Center and the Sarajevo City Center, are responsible for the closure of many kineska radnjas. Reduced tariff rates for large imports of goods favors large corporations as opposed family-run, small businesses. However, the entry of the former allows consumers to purchase higher quality goods and represents the continued integration of Bosnia into the international market.

“My friends have all left, but I won’t leave,” emphasizes Jun. “I visit China during the holidays, yet I always return to Sarajevo. This is my home. This is my family’s home.”

*Names have been changed in order to protect the privacy of interviewed kineski radnja owners. 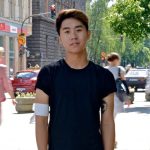 A former intern for the Post-Conflict Research Center (PCRC), Hunter Zhao is currently pursuing a bachelor’s degree in History and Honors Sociology from the University of Michigan. Inspired by his own family history as well as the stories of other immigrant families, he is interested in the field of migration studies and the integration of migrants & refugees. At his university, Zhao also serves as a research assistant for the Program for Refugee and Asylum Law, a research fellow for the Nam Center for Korean Studies, and is the president of First Generation College Students at the University of Michigan. Funded by the U.S. Department of State’s Benjamin A. Gilman Scholarship last summer, he studied at the International Center for Hellenic and Mediterranean Studies where he began to learn about the complexity and plight of migrants in the Western Balkans. After graduation, he hopes to pursue a master’s degree in migration studies as well as attend law school in order to impact the realm of migration policymaking.