Girls Coding Kosova is proving that the technology sector is not just a man’s domain.

Girls Coding Kosova is proving that the technology sector is not just a man’s domain. The Pristina-based non-governmental organization is dedicated to increasing the number of women coders and programmers by providing them with opportunities for skill acquisition and development and encouraging them to get involved in exciting startups and to even launch their own companies.

As of 2015, Kosovo’s youth unemployment rate among people ages 15 to 24 was 57.6% with a more than 10% difference in the unemployment rate between low-skilled versus high-skilled female workers (28.1% vs. 39.3%, respectively).[1] It is within this context that Girls Coding Kosova (GCK) was established.

Founded in 2015 by Zana Idrizi and Blerta Thaci, the central mission of GCK is to encourage women to reach their full academic and professional potential in technical fields. The organization seeks to achieve their mission by exposing and educating women to software programming and coding. Balkan Diskurs had the opportunity to sit down with Zana in Pristina to learn more about GCK’s approach to education and the impact, challenges, and achievements GCK has experienced to date.

According to GCK’s founders, pursuing higher education in the field of technology and related disciplines would increase the potential for women to be successful in the IT industry. Zana herself received a degree in International Security from the University of Denver in the United States, but she emphasizes that higher education in and of itself does not guarantee employment.

“Many girls give up on potential careers because they are not afforded the proper encouragement or support from those around them. Families often question a young woman’s choice to attend a technical university and urge them to pursue something easier that will provide them with a job—one that is more fit for a woman,” Zana explains.

Another aspect of GCK’s work is to combat societal gender stereotypes and gender bias within the tech sector itself. A central component of their activities is to show women they are capable of doing whatever they have the desire to do. They can find a job, create an application, fight sexual harassment, and change their own lives for the better.

Such a message may seem idealistic when referring to a country with a youth unemployment rate of almost 60%, but Zana explains that Kosovo has a great market for coders and programmers and that employing women in the IT sector provides a concrete solution to the unemployment problem.

“Outsourcing opportunities make our work necessary. The availability of low-cost, skilled labor from Kosovo attracts many types of companies that want to outsource their work. Many people from Kosovo that acquire jobs in coding and programming find them in this way. There are also many start-ups that develop applications, websites and other products for the tech industry who are looking for young talent,” says Zana.

So, how does GCK find these “mythical” female programmers and coders? Through the best medium the 21st century has to offer: social media. GCK challenges the widespread stereotypical view that computer science is man’s field by sharing online content that counters these narratives and perspectives. Imagine being a young woman and recent graduate of Computer Sciences in Pristina. You are struggling to find a job and, then, you open Facebook and see that one of your classmates liked a post by GCK. You check their page, go to their website, apply to participate in one of their workshops, and end up developing a wildly successful app. Some foreign company, impressed with your skills and what you’ve created employs you. This is not just a dream, but a true scenario that has been realized through the great work that GCK is doing.

One of GCK’s most noted accomplishments has been the development of the “Walk Freely App”, an app developed to report sexual harassment and, as is implied by its name, will allow women to walk more freely. ‘Sexual Harassment in Kosovo’[2], a report released by the Kosovo Women’s Network in 2016, details a general lack of awareness regarding what constitutes sexual harassment. Opening up a dialogue about the problem is a crucial first step to encourage reflection and formulate solutions. 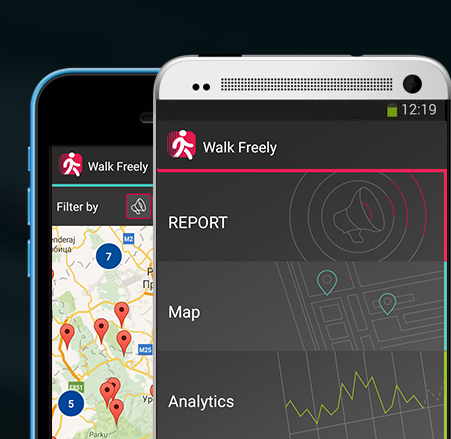 “One of the biggest challenges is where to draw the line between flirtation and harassment. It is especially difficult to do so in a society where we are not taught that sexual harassment is wrong – men are not taught that it is wrong! When you talk about sexual harassment, you have two different conversations: one with men and one with women. The main idea behind the app is not just to gather data, but also to also change societal behaviors in the community. Sexual harassment is wrong, and we have created a mobile app that allows you to report it,” explains Zana.

Thus, gathering data from real-life experiences and making that data publicly accessible via a user-friendly website is part of the solution. Allowing women to disclose their traumatic experiences provides an avenue for the acknowledgment of their struggles and raises consciousness about the widespread phenomenon of sexual harassment. Another inspiring aspect of the app’s development is that out of the 30 young women trainees who worked to create it, 16 were immediately employed. So, if the premise that ‘IT is a non-woman field’ were true, then you must acknowledge that this is a great result.

GCK is not only working towards gender equality in the IT sector and creating awareness about the issue of sexual harassment but is also using its coding trainings as an opportunity to foster positive inter-community interaction. Indeed, Zana is in the midst of implementing a project called “Code for Mitrovica” for 20 girls: 10 from north Mitrovica and 10 from south Mitrovica. In addition to providing participants with technical skills, the project gives young women from both Serbian and Albanian communities the same learning opportunities. Following a series of workshops, project participants will work together to develop a digital tool that aims to improve people’s lives in both communities. This new project shows that cooperating and working together to reach a common objective is possible and even desirable.

When asked about what motivates her to do this work, Zana’s answer was pure and simple: “I have always been very passionate about educating women and gender equality. I have myself received a number of scholarships that have allowed me to study in the United States, travel the world, and attend a variety of conferences and workshops. I know and appreciate the importance of education and I want to give others the same opportunities that I was given.”

Zana and Blerta’s dedication to this work makes GCK a truly unique organization. They are passionate, smart, and innovative and are taking concrete steps to change the reality in which they live for the better, step by step, code by code. 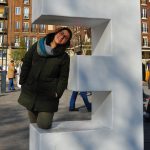 Eleonora is originally from a small town nearby Modena, Italy. She is currently pursuing a Master’s degree (MSc) in Peace and Conflict Studies at the Department of Peace and Conflict Research at Uppsala University, Sweden. Has concentrated on conflict and democratization in the Western Balkans and International Conflict Resolution. She holds a bachelor’s degree in International Studies from the Department of Sociology at University of Trento (Italy) with a focus on Political Science and International Relations. Her overall interest in the Western Balkans and Central Eastern Europe has further developed thanks to the Erasmus+ study program at Corvinus University of Budapest (HU). She is particularly interested in migration and displacement issues, as well as local empowerment and development.

Mala Sirena: An honest and sincere fight for our children

This story is about people, from a small town in central Bosnia, making an effort to provide children with disabilities the support they need to grow up, receive a proper education, and socialize.
April 1st, 2020