The Pretty Woman Forum is a Facebook group that has 47,826 members from across Bosnia and Herzegovina, the region, and even the world. The initial aim of the group was to serve as a place for the exchange of information, advice, and experiences, however, over time, it became a service for helping people in need.

It is a forum that has become an integral part of many women’s lives: a place where they began helping one another and doing things for each other that one would normally only do for close friends and family members. In time, good souls and hardworking hands began to change lives.

“The idea to make the group such as this spontaneously started from a group I had made to sell clothing. The women on the platform expressed the desire to organize among ourselves and to help a family or a sick child at least once a month. Since I’ve been working for a humanitarian organization for a number of years, I somehow took it upon myself to take care of the details and make things transparent, so that we could help those who needed it,” said Nina Grebo, a mother of three girls and one of the Facebook group’s administrators.

Now, the main goal of the group is to help those on the margins, the sick, and those in need.

“For me personally, my favorite action is one that is still ongoing and that is to help my friend’s son, Marko, who is suffering from retinoblastoma, or eye cancer. The women from the Forum have helped him to carry out further tests and to cover the huge expenses that this terrible illness carries with it,” said Nina.

One of the forum’s many humanitarian actions was launched for 16-year-old Nejra Hafizović. Nejra was diagnosed with a brain tumor and urgently needed surgery and relocation to Turkey. The estimate for the surgery and chemotherapy amounted to 37,500 euros. Due to the complexity of the disease, the surgery couldn’t be postponed, but the money had to be paid within a month.

A few days after the first Facebook post, a donor was found who was willing to cover the costs of Nejra’s treatment.

“She’s now in Turkey where she is waiting for the operation, and she checks in every day. She is receiving great care and they are predicting a full recovery. I’m anxiously awaiting her return to Bosnia,” said Nejra Šogolj, a future political scientist, humanitarian, and another one of the Facebook group’s administrators.

Other actions taken on by forum members include daily individual visits to the Jagomir Psychiatric Hospital and collecting donations and supplies for the Parent House, the Mjedenica Institution, and others.

“At the Jagomir Psychiatric Hospital, we’ve helped 22 patients who received packages with hygienic supplies, coffee, sweets, and books. Around 70 women from the Forum responded to this call to action. We received thank you notes, roses, and some art and crafts they made during one of their workshops,” remembers Grebo.

The Forum has proven that its members, whose numbers are constantly growing, have an understanding among one another. They understand the problems, worries, and hardships of others. They understand that their joint contributions will help others and change their lives for the better. Their efforts to work daily on such goals demonstrate their solidarity and humanity.

“There are other aspects of the Forum that can’t be ignored, such as how women have succeeded in developing small businesses as a result of good advice from other members, new connections, and the ability to promote their work on the platform. Some have also made lifelong friends. Sometimes the amount of information can be overwhelming. But, all in all, it’s a positive story. The Forum isn’t just made up of individuals or administrators, but rather of women who are always ready to extend a helping hand,” concludes Grebo. 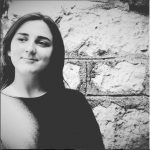 Azra is a Balkan Diskurs trained youth correspondent from Brčko. She studies communications at the Faculty of Political Science in Sarajevo. Her primary interests include women and youth activism.

Balkan Diskurs correspondent Louis Monroy Santander talked to Emir Kapetanović, director of “Djeca Mira” (Children of Peace) - a documentary that takes a look at the post-Dayton generation in Bosnia, their concerns, their realities and perhaps more importantly their dreams.
March 1st, 2018

Gender-based violence as a social problem

Given the pervasive patriarchal system in Bosnian society, this problem is not only a victim’s problem, as it is often perceived but also a social problem.
November 25th, 2021