Daut Tihic, a former soldier of the Army of the Republic of Bosnia and Herzegovina, and Dane Vasic, a former soldier of the Republika Srpska Army, met on the Skelani frontlines near Srebrenica in the fall of 1992. Daut shot Dane and, for 14 years, lived with the belief that he had killed him. That was until they met again and under completely different circumstances.

The place of the men’s reunification was not a greenhouse; cooperation in this area would develop later. It was in a local tavern that the two would meet again for the first time after that fateful day on the frontlines of Skelani. Daut immediately recognized the man he thought he’d killed, and this unexpected tavern meeting would soon transform his and Dane’s relationship from war enemies to best friends.

In 1994, Daut left for Sweden. After a few years, he returned to Bosnia; first to the town of Breza near Sarajevo and then to his native village of Skelani on the Drina River. He started up a cow farm and began selling milk. One day, after spotting Dane at a local tavern, Daut turned to his friends in awe and said: “I killed this man!” He then turned to Dane, exclaiming: “I killed you!” Dane laughed and replied: “How did you kill me when you can clearly see that I’m alive?”

Dane was alive, indeed, and from that day forward they began to see each other regularly. He now lives just 3 kilometers away from Skelani in the town of Bajina Basta, Serbia, located on the opposite side of the Drina River. He deals in medicinal herbs and forest fruits, has his own storage freezer, and owns a chain of souvenir shops. Every time the two men met, their conversations would become more detailed and, soon, they began sharing their war memories and present-day experiences with one another. They also had many discussions about agriculture and medicinal herbs, which is how their idea to cooperate came about.

It wasn’t long before the two men hatched a plan to start a business together. They decided to build a processing factory for converting milk into cheese and cream using traditional methods. As part of their plan, they would also bigger storage freezer and construct a small plant for processing forest plants. They managed to raise all the money they needed for construction and got all the necessary approvals from the mayor. Unfortunately, a change in government administration brought everything to a halt and they were unable to move forward with their plans. It was politics, as usual, that got in the way of ordinary people who were working together to try something new and create a better life for themselves and those around them.

“Ordinary citizens aren’t the root of the problems, it’s the politicians. There is an ever-present fear that if you don’t abide by their will, they will send the police to your door. It doesn’t matter whether you are a Serb or a Bosniak,” says Daut.

He believes that cooperation and good relationships among people are often not in the best interest of those in power. “The politicians would prefer that we quarrel and live in our own national ‘herds’. We are more easily governed under such circumstances,” he adds.

Dane says that, regardless of the political roadblocks, he and Daut are determined to work together and he is confident that they will succeed. When the men think back to their days on the battlefield, both have the same sentiments: neither wanted to wage war. They are just a couple of the many ordinary soldiers who believe the same thing; that the war never brought any good to anyone. Now, these two friends have a chance to right some wrongs and neither will allow such an opportunity to pass him by. 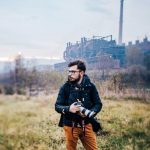 Armin is a Bosnian photojournalist and Balkan Diskurs trained correspondent from Zenica. He started working as a photojournalist for the Patria news agency in 2014, and is currently working for ''PIXSELL'' Photo & Video Agency. His works have been published in media outlets such as Forbes, NY Post, Wall Street Journal, The Sun, The Sunday Times, Daily Mail, National Geographic, and Bild, among others. (Profile photo: Haris Čaklić)

Geography with A+ “Prof” Vedran Zubić

Although every award he has received is meaningful to him, one is especially significant. “My favorite award is the one I got from the kids in 2016, but I prefer the smile or the hug of a child even more – that’s a real reward. It’s nice to receive any kind of recognition, but I would also like these awards to encourage a conversation about reforms in the education system.”
January 23rd, 2023