The marginalization of women in Bosnia and Herzegovina (BiH) is apparent when looking at the political culture of the state. Women suffer systematic barriers that keep them out of both partisan politics and civil society. The extent to which this marginalization can be explained by the absence of women from the Dayton peace process is the focus of this piece, which includes testimony by academic Aida Hozić and lawyer and activist Azra Berbić.

In December 1995 the Dayton Agreement was signed, resulting in formal peace between Croats, Serbs, and Bosniaks in BiH. Almost no women were involved in the negotiation process, except those in administrative roles. Academic Aida Hozić called Dayton “a series of locker room stories,” commenting, “I could simply not believe the absence of women was so obvious in the way that the agreement was negotiated.”

Dayton centered peace only on issues of ethnicity and territory, despite the prevalence of wartime sexual violence (WSV) against women during the conflict. Contemporary discourse at the time rightly focused on the widespread and systematic use of rape. However, the impact and implications of WSV on women, as well as underlying gender issues in the conflict, were not considered central to the peace process, despite how vital coverage of these issues was to stopping the war. Women’s bodies thus became a space for politics and a tool of intervention to prevent WSV. As Hozić says, “this is all really about using women and instrumentalizing women for the purpose of a very militarized international system that we live in.”

Thus, the opportunity to counter female instrumentalization and passivity in political processes was undermined at the first instance of peacetime in BiH. In today’s BiH, women’s political participation in both mainstream partisan politics and civil society are marred by patriarchy and difficult socioeconomic circumstances, preventing women from participating like their male counterparts. As lawyer and activist Azra Berbić observes, “Dayton showed the direction of politics, and 26 years later we are still living in it.”

In partisan politics, the number of participating women is significantly lower than the 40% required by BiH’s Gender Equality Law (GEL). A recent report revealed that in the November 2020 elections, less than 20% of elected candidates were women. It forecasted that compliance with GEL minimum standards could take an additional 42 years. Further, there are issues surrounding the treatment of women in office. Women remain marginalized in major discussions, gender pay gaps remain, and frequent sexist behavior has been documented.

Berbić points out that “women in politics [just] fulfill the quota.” She spoke of being solicited to fill the regional quota list, and how this made her feel that her thoughts and experiences were being ignored for the sake of expediency. Hozić agrees, saying that “those women who make their way through have to be either hyper nationalist and masculine or they have to be a professional woman…but overall, a much-abused space for genuine participation of women in political processes.” In other words, women in BiH must fit a certain profile in order to be successful, and even when in positions of representation, women who are genuine about making a difference are muted and pushed out.

These patriarchal attitudes and behaviors have led to many female change-markers finding positions in civil society instead. However, even within this field, women are undervalued. “[There is a] circumscription in the way in which women can enter politics as opposed to perhaps unruly activism and participation,” Hozić explains.

Therefore, BiH is at an interesting point in its trajectory for female participation. As Hozić says, “We have two processes that have been going on kind of in parallel. On the one hand, the story about female empowerment and bringing women into the economy [and political space] … and then, on the other hand, simultaneously, actually a suppression of women. So, you have this kind of formal increase of rights whilst simultaneously, you have suppression.” This is compounded further in the socio-political context of BiH, where high domestic violence rates and reparation rights for WSV survivors are still at the forefront of female issues.

Women’s participation goes beyond representation in institutions in BiH. Both Hozić and Berbić emphasize that patriarchal norms and values about women’s roles limit the time, space, and energy of women to participate. As Berbić summarises, “[In BiH, there exist the] burden to be the perfect wife and mother, to have a perfectly cleaned house, to always have prepared lunch…it’s just expected from women to get married…and of course, they just don’t have time to think about themselves or [how to build] their careers.” Hozić adds, “I know that women [after the war]…were more likely to get jobs…[women] often ended up as breadwinners…which really means that they were then not able to participate in the political life of Bosnia itself…I think that that precisely the reason why they’re not visible…they really carry the burden of society.”

This affects how women in BiH perceive themselves. Often, they do not involve themselves in politics because they do not know they can. Berbić comments on the absolute necessity of education in breaking intergenerational, internalized patriarchy: “a huge issue is the fact that we are not educated and [do not] feel like powerful individuals…[they] are not educated and aware of [their] positions in this society.” This is particularly pronounced in rural areas of BiH.  Thus, internalized patriarchy leaves women uneducated, unempowered, and with diminished perceptions of their own abilities. Berbić continues, “we are not questioning ourselves, and what is it that we are doing wrong…we are letting this to happen. So, I believe the main issue is that we are willingly participating in it.”

Women’s participation and representation in politics in BiH must be addressed. However, it is equally necessary to be critical of the emphasis placed on women in discussions of political involvement. Hozić explains that “it is [not] about women; women are very absent in these processes, and this is an excellent illustration of the absence of everybody…the focus on women makes sense because I think it draws attention to these glaring absences of others.”  In other words, it is important to consider whether our focus on women in discussions about healthy democracy is further instrumentalizing women and other marginalized identities. 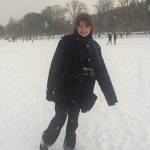 Mia is completing her MA Hons in International Relations and International Law at the University of Edinburgh. She has academic interests in the intersecting areas of post-conflict, atrocity crime, international humanitarian law and criminal justice. During 2021, she was interning at the Post-Conflict Research Center (PCRC) in Sarajevo.

The young married couple Ines (33) and Mario (32) Zović from Zenica have been together for four years, married for the last three. Their love was capped off by the birth of their daughter Nora. They fell in love during an election campaign Mario’s family is from Doboj, about eighty kilometers from Zenica. Ines, originally …
February 11th, 2021

The Pursuit for Equality: Women and Business in BiH

It isn’t easy being a woman in today’s world, but the increasing differences in the treatment of women and men have a significant impact on the statistics on women’s employment in BiH.
March 8th, 2019