During the COVID-19 pandemic, restrictions such as quarantine, curfew, and other forms of movement restriction are considered one of the necessary health measures that can save millions of lives. For women and girls, however, they can increase the risk of violence or even death.

According to the representatives of eight non-governmental organizations that run safe houses throughout Bosnia and Herzegovina (BiH), the number of reported cases of violence against women increased by almost 50% from 2019 to 2020.

A 20-year-old student from Brčko is one of the victims of attempted sexual assault and incest, and in her desire to send a message to society, she decided to share her experience, despite feeling pangs of guilt.

“As the pandemic began, most of our college responsibilities took place online. I became even closer to my sister, who began to trust me more and more and ended up telling me the darkest secret of her life. The secret was mine as well, and one that I have kept for a long time – we are both victims of attempted sexual violence by the same person,” says A.V. on what it was like to face the truth and discover that she was not the only one with this secret.

We spoke with psychologist and activist Ajna Jusić, the president of the Association “Forgotten Children of War.” Ajna describes her commitment to gender equality as advocacy for people who are systematically and socially neglected.

“I do not consider myself a radical feminist, but I will allow myself the freedom to say that the COVID-19 virus pandemic is an excellent indicator of the renewed expansion of violent patriarchal oppression. This time, however, it is during peace. And in all of this, we forget that our community today, unfortunately, still survives in the shadow of separatist war rhetoric that remains blind to violence. Blind then and blind today,” says Ajna.

Even in 2021, hundreds of millions of women and girls worldwide will be victims of gender-based violence. Although frightening, this figure represents only domestic violence cases that are reported, excluding many others that fall by the wayside. Quarantine and isolation were measures that were necessary to reduce the spread of coronavirus in the community. This has led to drastic changes in individuals’ daily lives. However, the positive effort in the fight against the pandemic has created serious psychological and socially devastating consequences.

“We must be aware that we have been living in a pandemic of violence against women even before the Covid-19. The “Nisam tražila” [“I Didn’t Ask For It”] movement and the amount of painful testimonies of violence confirms the previous statement. However, during the pandemic itself, the system of Bosnia and Herzegovina ignored statistics that show an enormous increase in violence against women during the pandemic,” said Ajna.

During the COVID-19 pandemic, violence against women tended to increase. In quarantine, women were constantly in the vicinity of potential abusers, with a limited right to leave, increasing domestic violence in homes. In addition, everyday stress, loss of income, and lack of socialization have led to negative effects, most often between partners.

“Such atrocities happened even before the introduction of quarantine. A pandemic, a sense of loneliness, or anything else, for that matter, should not be an excuse for any kind of violence. I can hardly convince myself that such excuses exist, given the pain and the impact this situation has left on me,” adds A.V.

What Will People Say?

“Most choose to remain silent because we live in a system that condemns any talk of surviving violence. We currently live in a society where myths exist that claim women are victims because they are promiscuous, or because they wore short skirts and the like,” says Ajna.

We have created a community where physical violence and verbal conflicts are completely “normal” parts of a partnership. That is why harassment from people on the street, like men yelling “pussy” or “hot chick,” in Balkan society is acceptable. Most will say, “well, she asked for it, look how she is dressed.” However, what is the “justification” for violence within the four walls of the home? Is it also caused by an incorrect assessment of one’s clothes? Or does it just happen because you are a woman?

“I was silent about it for a long time. I tried to forget and erase it from my memory. I lied to myself that what happened was not true. There was also a sense of fear of others’ opinions and a lack of security. All this was made even worse because he was my cousin, and I didn’t know whether others would believe me. We only hear about incest elsewhere in the world; there is no such thing in our country,” says A.V.

Ajna explains how society can influence these issues and whether society is willing to acknowledge and discuss the presence of gender-based violence openly.

“Knowledge is power: the more young people know, the more control they have over their lives; the less they know, the more control other people have who take advantage of the circumstances. From an early age, children are interested in the differences between girls and boys and how they came into the world. Their questions should be answered honestly, age-appropriately, and when they can understand the conversation,” explains Ajna.

Social stigma and insufficient support for victims present a great burden. Victims constantly struggle with thoughts about whether they are to blame for everything that happened to them. Only some opt for professional help, while the rest live through trauma for which they are not to blame.

“The first step is to talk about it. From psychologists’ point of view, talking about violence opens other paths for dealing with such trauma. If someone is silent about the violence they have survived, then that person is denied the opportunity to receive support,” adds Ajna.

A.V. explains how important family support is and the process of accepting the truth.

“I went to a psychologist only after I found out that my sister had experienced the same thing because I didn’t, and I still can’t forgive myself for not speaking up in time – because if I had, she wouldn’t have experienced it. Our family’s reaction was unfortunately divided, although the perpetrator admitted his guilt. It took me a while to get my life back to normal. The hardest part was interacting with other people again. If someone approached me and tried to hug me, I would twitch because I would feel threatened in any person’s presence.”

Through her work, Ajna has had the opportunity to deal with the problem of gender-based violence.

There is no stopping for this young woman, even though every day is a new challenge for her. The burden she carries is heavy, but she realizes that she is not alone. That has encouraged her to talk publicly about everything so that hopefully, fewer women find themselves in her situation.

“Be brave and don’t lose hope because we are not guilty, we did not ask for it, and we are not alone in this,” says A.V.

Gender-based violence is omnipresent, and society needs to tackle this problem and provide victims with a safe space to talk about it. There are no excuses, not even the Covid-19 pandemic, for the increasing number of gender-based violence cases and the inhumane treatment of women and girls.

“I am a woman, I am my mother’s child, I am an activist, feminist, and human rights advocate. As I live and breathe, I dedicate my struggle to creating a non-violent and inclusive society that dares to face a war and say, ‘No, I don’t want that.’ Let’s break free from all these war chains,” says Ajna. 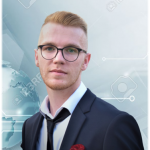 Mirza is a Balkan Diskurs trained youth correspondent from Gradačac. He is a student at the International Burch University in Sarajevo at the Faculty of Economics and Social Sciences, Department of Management.