Objects found in mass graves throughout Eastern Bosnia and on the route of the Death March are being donated to the Srebrenica Memorial Center alongside the personal testimonies of those who donate them as part of one of the largest and most important projects in the Memorial Center’s history. This expansive permanent exhibition pays a profound tribute to the victims of the genocide in Srebrenica, Bosnia and Herzegovina. The Memorial Center acknowledges that it is impossible to tell the story of Srebrenica without telling the story of the rest of Bosnia and Herzegovina, and thus, the invitation to donate objects, artifacts, and other documentary material is open to all.

This exhibition will also include the multimedia educational project “MEMENTO: Fragments of the Srebrenica Genocide.” Through the personal stories and photographs of genocide survivors and victims, MEMENTO paints a detailed picture of their lives and the struggle for survival during the 1995 genocide in Srebrenica. The project consists of a photo exhibition, photobook, audio testimonies of survivors, and a mobile application. MEMENTO was created by the Srebrenica Memorial Center in cooperation with the Post-Conflict Research Center.

The objects are donated by survivors of the genocide as well as the families of genocide victims. This includes Muhamed Delić, whose father Azem, grandfather Selim, and two uncles, Eniz and Aziz, were killed in the genocide. In an interview with Balkan Diskurs, he spoke about his last meeting with his father and grandfather, and about how he, his mother, and his sister were deported from Srebrenica in July 1995.

The most beautiful gift for a son

Muhamed lived in the village of Bijelo Polje near Srebrenica with his father Azem, mother Almasa, and sister Maida. They were mainly engaged in agriculture and animal husbandry, with Azem occasionally working construction to earn extra money.

“In his free time, my father liked to do handicrafts. On one occasion he surprised me with a belt. It was one of the most beautiful gifts then. Today, it’s the only memento I have of my father,” said Muhamed.

When Serbian military and police forces occupied Srebrenica on July 11, 1995, the Delić family parted ways in Babuljice. The father went through the forest in an effort to reach the free territory under the control of the Army of the Republic of Bosnia and Herzegovina (ARBiH), while the mother, children, and grandfather, Selim, went to the United Nations base in Potočari, seeking help from the Dutch Battalion soldiers.

“I remember the moment of our last goodbye. My father told my mother not to worry about him being alone, and then he turned to me, stroked my head and said, ‘listen to your mother,’” Muhamed recalled.

Muhamed, along with his mother, sister, and grandfather, spent two days in front of the UN base. Apart from his grandfather, everyone was deported by bus to the settlement of Luka in Kladanj. “A soldier separated my grandfather as he led me to the bus,” Muhamed said.

Muhamed describes the deportation to Kladanj as long and difficult, and says they saw a lot of men along the road to Konjević Polje, which intensified their fear.

In just one week, beginning on July 11th, 1995, Serb military and police forces killed the men and boys who had fled through the woods as well as those who had been separated in Potočari from their families in Potočari or found elsewhere.

According to the verdicts of the International Criminal Tribunal for the former Yugoslavia (ICTY), over 8,000 men and boys were killed in the Srebrenica genocide. Upwards of 1,000 men and boys were killed at mass execution sites in Kravica, Orahovac, Petkovci, Kozluk, and Branjevo. After the killings, the victims’ remains were scattered across mass graves throughout the wider area of Eastern Bosnia.

Selim and his three sons

Muhamed’s father and his two brothers were unable to cross the forest to reach the territory controlled by ARBiH. Together with other prisoners, they were killed at mass execution sites. His grandfather Selim was also killed.

The family continued to hope that they were alive until 2003, when their remains were identified over a period of five months. Selim and his three sons (Azem, Aziz, and Eniz) were finally found.

The father and his three sons were buried on September 20, 2003, at the third collective funeral and the day of the official opening of the Srebrenica Memorial Center. For the first time, a father and three sons were buried at the same funeral in Potočari. Due to this great tragedy, the then President of the United States of America, Bill Clinton, paid tribute to the victims. 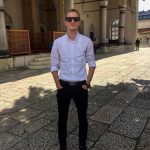 Ahmo is a Balkan Diskurs trained correspondent from Srebrenica. He obtained a bachelor's degree in History, and is currently employed at the Srebrenica Memorial Center.

Bosnia and Herzegovina, a small heart-shaped country, has some of the most beautiful rivers and natural springs in this part of the Balkans. According to some traditions, the very name of “Bosnia” comes from the word Bosnae, which is the Illyrian name for the river Bosnia, which flows through our country.
August 11th, 2022