One would think that art and post-war wounds were not so connected. Aida Šehović, a Bosnian-born artist based in New York, disagreed and, for the past 15 years, has proven that art can help in post-conflict recovery.

Her nomadic monument travelled the world, educated people and, most importantly, showed empathy with the victims of the Genocide in Srebrenica and their families.

The idea was simple, in as much as a complex work of art can be. The starting point was a simple cup of Bosnian coffee served in a fildžan (small coffee cup), and the tradition accompanying it. This coffee is usually shared with family, and you take time over it, sharing news and thoughts together. As Aida told the young people who came from all over Bosnia and Herzegovina for Srebrenica Youth Camp (2020), the Bosnian coffee tradition was one of the only things left in her family after escaping the war – firstly to Turkey, and then to the US. All they had left was the smell of coffee served in fildžani, her parents sharing it for hours.

During her first visit to BiH after the war, she also visited Srebrenica. Aida met with the family of the Genocide victims, and one of them told her that one of the hardest things for their family was not being able to share a cup of coffee with their loved one who was not with them anymore.  A sentence that a young and talented artist could not forget. She would use this in her artwork, which would later travel the world displaying all the beauty of her roots, but also the cruelty that occurred during the war in Bosnia.

On 11th of July 2006 in Sarajevo, Aida poured the first 932 cups of coffee that were all collected and donated by the Women of Srebrenica organization. This is where her idea to collect 8372 cups representing 8372 souls killed during the Genocide in Srebrenica started. What is more fascinating is that the coffee is prepared and poured on the spot, where casual passers can also participate and, mostly, educate about what happened in Srebrenica in July 1995.

In the following years, the “Što te nema” monument was shown on the same date every year, moving between New York, Den Haag, Stockholm, Istanbul, Toronto, Chicago, Geneva and Venice. As well as its international reach, this year, 2020, was the 15th and last exhibition, as per Šehovic’s wish for the monument to “return to its home” in Srebrenica. The preparations lasted for months and the global pandemic did not stop the artist and her crew from achieving the goal of bringing it home. This was all facilitated by Šehovic’s collaboration with the Srebrenica-Potočari Memorial Center and Post-Conflict Research Center.

While Aida and her film crew were filming the personal stories of people who donated cups for this project, the Post-Conflict Research Center organized a Srebrenica Youth Camp, four-days activity for 25 youth from 14 different cities across Bosnia and Herzegovina. During this camp, youth were listening to the lectures from prominent speakers and researchers from the fields of transnational justice, human rights, reconciliation and journalism. On the last day, Aida had a lecture with the youth where she explained the whole “Što te nema” project from its roots and where she stressed to them how important it is to work hard and believe in your ideas even when others don’t. Furthermore, Aida explained how will installation setup work on 10th of July and, at that moment, all participants of the Camp, as well as PCRC interns, like me, were not completely aware of the whole project and its possible influence.

When the day came, we were all fresh and ready to work on the monument, ready to put in our all for Aida. We still had yet to grasp the huge influence it would have on us and on everyone who saw it. The morning preparations were slow, as every coffee had to be prepared in the traditional Bosnian way without any short-cuts. At around 10am it was time for pouring the first couple of cups. As Aida poured the first one and the SYC participants continued after her, the silence and tears triggered some awareness of what it was all about and what was to unfold that day. Each cup of coffee would have its story. With each one, we would offer our respect to the victim. Some of the SYC participants lost family members either in Srebrenica or during the Bosnian war in general; they were pouring coffee for their loved ones. There are few moments in life when you are left speechless and all you can do is watch and admire. This was one of those.

As the day progressed, the sun and heat became hard to handle, but no one, during the 12 hours of work, thought of giving up at any moment. One of the most important aspects of the whole installation was explaining what was happening, why we were pouring hundreds and soon thousands of cups of coffee. The curiosity and the questions abounded, as well as the stories shared by those who lost their brothers or cousins, telling of when or what hurt the most. One mother told us: “I appreciate what you are doing here and the respect you are showing for the Genocide victims, but I would like to find just one bone of my son so that I can at least pray on his grave one day before I die.” You hear stories, and you pour coffee with even more and more meaning and understanding. One by one, until the final 9909 cups, the last one poured at sunset.

On the 11th of July, the “Što te nema” monument was proudly standing. Even though there was no more of the crowding around as the coffee was poured the day before, each fildžan full of coffee was still telling its story. In silence. In honour of the victims. As a reminder that what happened in Srebrenica should never happen to anyone anywhere.

The silence of the commemoration day ended in the afternoon of the 11th of July. Survivors, family, visitors, diplomats, politicians – all those who had come to pay their respects had visited the monument, asked questions, and shared their stories. For the volunteers and the participants of SYC, it was time for cleaning, collecting, and counting fildžani.  But before we started, we all took a seat around the fildžani to share our thoughts on what working on “Što te nema” meant for us. Young participants shared their emotions and stories of how they bonded with each other despite their differences; of how, in spite of the difficult weather conditions, they made it through together. Older volunteers shared their tears and war wounds, but with the reminder that the youth sitting around, all these cups should be the ones to work to build a society that prevents anything like this happening ever again. That they should work on speaking the truth, and that proper education was the key. One of the participants asked us to imagine each cup of coffee as a person standing in front of us. This was the moment after which none of us around 9099 of coffee cups could continue saying a word.

As we methodically cleaned and dried the cups, the youth participants continued to share their thoughts about the present situation in their society and their wishes for the future. We had all learned something new, about ourselves, about others, about the simple wish of a mother to find one single bone so that she could bury and pray over her son. It is hard to summarise the whole of the “Što te nema” project, together with being involved in the Srebrenica Youth Camp, but I can say this: peace is something we should respect and protect with all our might. 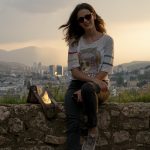 Valentina graduated International Relations, majoring European Affairs, at the University of Bologna. She holds an undergraduate degree in Political Science from the University of Zagreb. In 2020, she interned at the Post-Conflict Research Center (PCRC).

Love Is Always The Right Value To Fight For

Although they have encountered many difficulties throughout their life together, Danijela and Miralem have been living in a happy marriage for 27 years. They proudly point out that love is always the right value to fight for, because when there is love, there is respect among partners.
January 27th, 2021