British photographer Paul Lowe’s black and white photo exhibition, “Opsada/Siege” depicts daily life, culture, survival, death, and childhood in besieged Sarajevo, and will be displayed annually starting on April 5th in the Sarajevo City Hall. The exhibition will serve to commemorate the beginning of the longest siege of a capital city in modern history.

During the commemoration of the 30th anniversary of the start of the Sarajevo siege, the exhibition “Opsada/Siege” was exhibited in the atrium of Sarajevo’s historic City Hall, which was destroyed during the war. While photographing it in 1993, Lowe said that it was so utterly decimated that he couldn’t imagine it would ever be rebuilt or reopened. “So, installing the photographs, including one taken in the ruins of City Hall during the war, was a powerful, symbolic moment for me and the city,” Lowe said.

New printing technology has enabled Lowe to to scan the negatives in high resolution and print them on mesh panels intended for outdoor use. This allows the images to be displayed at a staggering size without compromising the quality. Thus, the exhibition’s black-and-white photographs, 2.35 meters wide and 1.5 meters high, are almost life-size prints. In City Hall’s spacious atrium, the photographs do not compete with the space but work in synergy with it.

The atrium is hexagonal, and Lowe chose five photographs to display on each of the six sides, for a total of 30 photographs. Each of the sides has a theme: the siege itself, culture, daily life, means of survival, death, and childhood. “I really wanted to use the photographs in a way that would work with the hall’s architecture to tell the story,” Lowe emphasized.

Based on these black-and-white photos, some may be surprised to learn that Lowe was initially known for color photography. “When I first came to Bosnia in ‘92, I was kind of known as a young, up-and-coming photographer, working in predominantly color. During my first trip, I only shot in color,” he said.

Lowe’s initial visit to Sarajevo was short. After only a few weeks, he left to cover the famine in Somalia. However, he was soon drawn back to the city and ended up staying – more or less for good.

“When I came back in ‘93, I had a slightly different perspective. At that point, the siege had been dragging on; it was starting its second year. I was looking more at that story of daily life – how people, ordinary people, survive in this extraordinary situation. I felt that something about the nature of the city, the essence of what was there, would work better in black and white,” Lowe explained.

The City of Sarajevo and the Information Center of the International Criminal Tribunal for the Former Yugoslavia (ICTY) organized the commemoration of the 30th anniversary of the siege of Sarajevo on April 4th and 5th of this year, in partnership with the Post-Conflict Research Center, the Srebrenica Memorial Center, and the Memory Module. During its twelfth session on February 23rd, 2022, the City Council of Sarajevo adopted Mayor Benjamina Karić’s proposal to commemorate the 30th anniversary of the siege. The commemorative program opened with the “Opsada/Siege” exhibition and was followed the next day by an international conference entitled “30 years later – Sarajevo.”

“It is vital that testimonies like these are preserved for future generations – to warn, but also to educate,” said Ismena Čaušević, the Expert Assistant for the Information Center on the ICTY.

As she explains, the exhibition “Opsada/Siege” is permanently stored in the ICTY Information Center in the Sarajevo City Hall and will be re-exhibited in the atrium for public viewing every year as part of the commemoration.

At the exhibit’s opening in April, Mayor Benjamina Karić lauded the photographs chosen for the display. “Between 1992 and 1996, Paul Lowe lived with us in Sarajevo, documenting our daily lives. He not only showed residents fleeing bullets in sniper alley, or the wounded seeking help, but also our citizens defying daily hardships with their strength,” she said.

One of Paul’s favorite photos in the exhibit also centers on citizens’ quiet defiance. “There’s a picture of a young girl watching an old man play chess, shot in the staircase of an apartment building. It’s a simple picture, but it says a lot about people’s daily existence because you couldn’t go outside,” he said.

As Lowe says, Susan Sontag’s choice to stage the Samuel Beckett play Waiting for Godot in Sarajevo was very apt because life during the siege echoed many themes from the play. Just how do you pass the time, day after day, month after month, year after year?

Velma Šarić, president and founder of the Post-Conflict Research Center, pointed out the importance of documentation. She highlighted the role of foreign photographers and journalists who lived with the citizens of Sarajevo and recorded what was happening there daily. The reports and photos they shared not only informed global audiences about the siege, but also provided the ICTY with documentary evidence substantiating the terror which was unleashed upon Sarajevo’s civilians.

Lack of Knowledge about the Siege of Sarajevo

Nataša Govedarica is from Sarajevo but has lived in Belgrade for over twenty years. She is currently the Serbian Country Director for ForumZFD, a German peacebuilding organization that started in the Western Balkans and now works worldwide. She was the main force behind the opening of “Opsada/ Siege” in Belgrade at the end of April.

“A decade ago, we would have had a selection of spaces where we could have had Paul’s exhibition. It could have been on display in, for example, the Belgrade Cultural Center,” said Govedarica. She recalled the 2014 exhibition in the Belgrade Cultural Center about the Bogujevci Massacre, in which Serbian paramilitaries killed Albanian families in the town of Podujevo during the 1999 war in Kosovo.

That exhibition, in her opinion, presented much more controversial material. Today, however, she said that there is no way that a publicly funded institution in Serbia would accept Paul’s work.

“Now there are basically two galleries which display brave material: the Space for Cultural Decontamination and the Youth Initiative. No one else wants to go against the mainstream – and, I must say – nationalistic narrative,” Govedarica explained.

Despite the Space’s reputation for attracting the same anti-establishment audience, Govedarica was pleased with the diverse crowd in attendance.

“These events tend to be attended by the same closed circles, and I would know everyone. Usually, I would walk around saying, ‘hello, hello, hello, how are you?’ But this time, I saw many new faces, young faces,” she said.

At the event in Belgrade, Paul Lowe also got to interact with young people and was surprised by how little they knew about the Siege. “Several people said the same thing, which I found really chilling. Until they were in their early 20s – these are university-educated, human-rights-activist types – they didn’t even know there had been a siege of Sarajevo. It wasn’t that it was denied. It simply didn’t exist,” he explained. He said he found it astonishing that in Serbia’s capital city, – the sister city in some ways, just a few hours away from Sarajevo, many didn’t even know the siege had happened.

The photos reached even more young people this summer, and the prints from Sarajevo City Hall made their way to Srebrenica temporarily in July for the anniversary of the Srebrenica Genocide.

Transition from “Loud” to “Silent” photos

At the opening of “Opsada/Siege” exhibition at the Srebrenica Memorial Center in Potočari, Memorial Center Director Emir Suljagić thanked Paul Lowe for documenting the everyday life of the citizens of Sarajevo during the siege. He said that the siege of Sarajevo was the most underestimated event of the disintegration of the former Yugoslavia. “No one gave Sarajevo any chances,” said Suljagić.

Lowe has had an interesting shift in perspective on the photos he took in Sarajevo during the war. At first, he favored what he calls the “loud” photos – the photos that got up close and personal with atrocities, in an effort to inspire the international community to do something.

As time passed, however, his aesthetic appreciation grew for the photos which captured the quieter moments, the silent resilience of Sarajevo’s citizens. Many such photos are included in “Opsada/ Siege.”

“I photographed a lot of different ways that people made homemade devices to carry water, food, and firewood – prams, sledges, trolleys. I probably photographed sixty or seventy different devices like that, which has a strong ethnographic value,” Lowe said.

Prints from Belgrade were in Prizren, Kosovo to be shown during the popular Dokufest film festival. Lowe is in negotiations to exhibit them in Novi Sad as well.

As “Opsda/ Siege” continues its Balkan journey, Lowe stressed that he wants to try to find some of the people he photographed and learn what has happened to them over the years. “I want to ask them about their memories of the siege. That’s the next project,” Lowe announced. 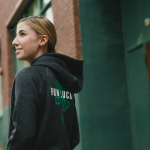 Josephine graduated from the University of Chicago, obtaining a master’s degree from the Committee on International Relations in June 2022. The United States National Security Education Program awarded Josey a Boren Fellowship in 2021. As a part of this award, Josephine traveled to Bosnia and Herzegovina to improve her language skills and continue her academic research related to the Western Balkans, particularly the divided education system. Josey worked at the Post-Conflict Research Center as a research fellow. She is the coordinator for The Transatlantic Writers’ Group, the Wilson Center’s Global Europe Program initiative to promote young writers and thinkers focused on transatlantic issues.

20 Years after Dayton: What’s Next for Bosnia?