“I never had a better coffee than this one,” “Great job, man, congratulations,” “Wow, your coffee was so good, congratulations!” These words can be heard often in Zmajevo Srce [Dragon’s Heart], the only café in Tuzla where people with Down syndrome and other disabilities work as waiters. Such words and praise mean a lot to them. They understand everything very well and they always remember what you order.

Edin Mahuzuić, aka “Popaj,” is one of the employees at Zmajevo Srce. His leg was amputated last year, he has diabetes, and he cannot see out of his left eye. “I got a new job opportunity. I feel so good. I work with children who understand me. When something is said to them, they always repeat it, and once they learn it, they always do it right, so it’s great and fantastic,” said Mahuzuić.

Regarding working with his colleagues, fellow waiters who have Down syndrome and other disabilities, Mahuzuić describes it as therapeutic because they give him energy every day, and they have a nice relationship with guests who understand them.

“I was scared at first because I had never had contact with people with Down syndrome, but now it’s fantastic. It’s better for me now than those 25 years of working with people who don’t have any health issues. It’s great for me and I can’t wait to come to work every day,” said Mahuzuić, who has worked as a waiter for many years.

Zmajevo Srce Café is the first café to employ people with Down syndrome and other disabilities in Tuzla Canton. The café was opened as part of the Zmajevo Srce Association, which helps vulnerable segments of society through various projects which involve the promotion of culture, customs, history, and music.

Omer Isović, the president of the Zmajevo Srce Association and the owner of the café of the same name, came up with the idea to open a cafe and employ people with Down syndrome and other disabilities last year, after collaborating with his longtime friend Almir Ikanović. The idea was to do activities for people with Down syndrome where they would work in cafés as waiters.

Isović started thinking that working with one person in a café is not a good idea, because it would highlight their health issues and disabilities. After that, he came up with the idea to do the same thing in several cafés – a dozen in Tuzla and one in Živinice. It lasted about two months and people were thrilled. They were happy to come to socialize, drink coffee, and eat pancakes, prepared by people with Down syndrome and other disabilities.

“The café was obliged to pay per diems to the workers because it was not a project but good will and our effort,” said Isović. He explains that when the project was finalized, the children were overjoyed because they really cared about working and actively showing of what they are capable of.

“Everyone liked the idea”

After that, Isović and parents of children with Down syndrome started working on the project. However, because of COVID-19 the café opened later than planned, on May 20th of this year. It has received support from many companies and the government of Tuzla Canton.

“We didn’t encounter any obstacles. Everyone liked the idea and simply supports us. There are people who come in alone to help, call us, and give donations in the form of a drink or something similar,” said Isović. He emphasized the immeasurable contribution of two parents of children with Down syndrome who worked together with them from the very start and give maximum support to the café.

According to Isović, young waiters in the Zmajevo Srce Café always say that they feel happy after they finish their shift.

One waiter, Saša, was supposed to go to the seaside with his parents, but instead he decided to stay and work. “I want to buy a swimming pool from the money I earned,” said Saša. He adds that he has a place to stay even if his parents go to the seaside.

The waiters’ shifts at Zmajevo Srce Café are three hours per day, and Isović says that they often want to stay rather than go home.

“They would work more hours, but I have to make sure they don’t get tired out so that they come to us well rested the next day,” Isović explains.

Zmajevo Srce Café is a project that aims to be self-sustainable, and they benefit greatly from the interactions between guests and staff.

“Our guests communicate with our waiters and special connections are developed there. We already have regular guests. They come for the best coffee in town because we really have good coffee. You will not get this from the waiters in most cafés because they are tired, and these boys and girls of ours have a special energy,” said Isović.

In the near future, they plan to install ramps to improve the accessibility to the café and bar, given that the café also employs disabled people who use wheelchairs. They also plan to paint the walls with artwork closely related to people with Down syndrome.

Zmajevo Srce Café is also unique in that after the Friday prayers, which are held on Fridays at noon, the coffee is free, because the Turalibeg Mosque and the Islamic Community are nearby. 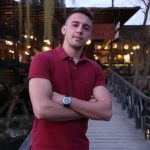 Selmir Smajić is a trained Balkan Diskurs correspondent from Lukavac. He is a second-year student at the Medical Faculty of the University of Tuzla. He has been active in the non-governmental sector for several years and is known for his positive energy, self-confidence, and strong friendships. He describes himself as an altruistic and assertive person and is guided by Siltanen's quote: "The people who are crazy enough to think they can change the world are the ones who do." He does not see his future anywhere but in Bosnia and Herzegovina. Topics Selmir aims to cover are stories based on positive changes that young people initiate in their communities and highly needed humanitarian work. As a young person, Selmir will continue to strive to influence his peers for changes that will bring a better tomorrow for all of us.

The best argument against the use of tobacco products is the fact that one of the more than three billion smokers in the world dies every eight seconds.
June 12th, 2019