In Bosnia-Herzegovina, equal rights only exist on paper.

Throughout Bosnia’s often painful history, and now in our still-struggling democracy, people have lived with great hardship: retired people and young people, men and women, employed and unemployed, students and school kids alike. No one is having an easy time, but I dare say it is the worst for women, as they only seemingly and on paper have the same rights as men. The wide gap between the reality and what should be is increasingly and glaringly visible.

You hear that women are the “necessary evil”. At first you think that a statement like this could only be uttered by the most uneducated of men. But more and more educated men, as well as political elites and leaders, are making similar comments in the guise of jokes or off-hand comments.

One could argue that the mentality is the problem. Female children are commonly advised to be silent and endure whatever comes upon them. Everything that was wrong and done by a man was excused with “he is just a man.” Women often put themselves in a neglected position.

For instance, granddaughters would often hear, “listen to your husband,” from their grandmothers before they get married. “Listen to your husband” – what does that even mean? Should she listen while he talks so she can be a fair partner and contribute to their life, or should she really just listen, and abandon her own will? I would not argue that our grandmothers were talking about compromise. We should therefore work to empower women and to build up their self-esteem and their strengths.

We often hear that men and women do not think in the same way. Even psychologists agree. Studies show that women are more likely to demonstrate empathy and are more capable of handling unknown situations.

It has also been shown that women are great debaters and diplomats. A woman can intuitively feel the flow of a conversation and is therefore more likely to draw meaningful conclusions. Additionally, women play an important role in conflict resolution and in the process of reconciliation. This clearly illustrates how women can be successful in very many aspects of life.

Women have the so-called multitasking ability and are capable of doing various things at the same time. This is a great advantage, but women in Bosnia are denied the opportunity to show their abilities. Even women in top leadership positions have a hard time showing how capable they are due to daily manipulations from their male counterparts.

Some claim that women are meant to be mothers and housewives. That is all. It is, however, not so simple. During job interviews young women are usually advised to not plan on having children. When should they plan on it, I ask? Once they retire? Motherhood and a career should not be two mutually exclusive paths.

Crucial changes and reforms are needed in society and at all government levels. It is necessary to fight for equal job opportunities and working conditions. It is not impossible to improve the situation, but each individual must start making an effort. And start now.

Malala Yousafzai, a Nobel Peace Prize winner, who risked her life fighting for girls’ access to education, should be an example for all of us. There are numerous examples of extraordinary women throughout history who were not valued enough simply because they were women. One of them certainly is Mileva Maric-Einstein. Despite being overshadowed by her famous husband Albert, she was a brilliant scientist in her own right, and there is some debate over what role she played in his work.

I think that women in Bosnia are capable of great things. But first we need to get rid of the assumption that we will not be able to handle the pressure of being both mothers and successful businesswomen.

Limiting women to motherhood or work only is a way of neglecting the full capacity that women have. It is like a one-way life.

Being a woman does not mean carrying a heavy burden on a weak back, it also means being blessed with the confidence and strength to handle whatever comes our way. 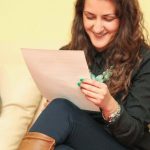 The dead in Sarajevo’s Jewish cemetery cannot speak for themselves. They cannot protest the damage to which their final resting place has been subjected. David Schafer and Alastair Carr (photos) report.
December 4th, 2015

I don't recall the first time I saw her. I know she was sitting in a wheelchair, collecting money for people in need and for the treatment of those who are suffering from various kinds of ailments. Several times, I left a small contribution hoping that, this time, it would end up in the right hands.
September 14th, 2018