Inter-group reconciliation, war heroes and benefactors of the three constituent ethnic groups, have all been well-covered topics in Bosnian society over the past 20 years, but the truth is, we seem to be unable to grasp the entire story.

For the past 20 years, Bosnia-Herzegovina has been waging a new kind of war using different and more sophisticated techniques. The institutionalized nature of this new war has allowed ethnic and political structures to continue their immoral endeavors. The sophisticated methods of war in the post-conflict era are truly amazing. We – the citizens – participate in this war without even knowing it. We suffer the consequences without even recognizing their origin; we instead recognize the increasing levels of poverty and unemployment, the increasing crime rates, and the decreasing security rates as the natural consequences of peace.

For more than 20 years, an imaginary wall has been created between Bosnian citizens; a wall that has been strengthened by the numerous social, political and religious stakeholders. This stonewall, with all its imaginary powers, seems much stronger than the actual historic walls, and creates a deep divide between not only the constituent people of Bosnia, but also between them and the outside world. These walls brazenly stand between us, and one might think, truly divide us. They make us believe we have nothing in common with “them”—those on the other side of the wall. But then a flood or a catastrophe quickly reminds us that it takes very little to tear down such walls. It’s surprising to hear that the flooding took away everything, including that damn wall. It’s surprising to see TV images with people from the “other side” begging and going through trash looking for food. It’s surprising to hear how on the other side of the wall people cry and laugh in the same way. In the end, it makes you wonder whom are we fighting against when we are all suffering the same injustices and heartaches on all sides

Walls are not truly walls

The first question a sensible person would ask is: “What is the purpose of these walls if not to protect me from the people on the other side?” The second question would be: “Why do we all suffer so much if I have not attacked them and they have not attacked me?” Other equally important questions may be: “Who destroyed us so profoundly? Who stole our dignity? Who has pushed us into hardship and poverty if we ourselves are not responsible?”

When a reasonable person thinks about these questions and looks upon the faces of the supposed protectors of his or her vital national interests, only then does he or she realize that one’s vital interests lost their vitality a long time ago. Only then does one realize that those walls are not truly walls and that their would-be protectors are, in fact, their greatest enemies. It is then that we also realize that those beyond the wall are actually our brothers and sisters through suffering and hard-earned knowledge. Only then does one understand the brutal nature of the recent war, in which people were killed by bullets and shrapnel wounds, and its sophisticated extension, in which people are now dying from anguish and indignity.

When rational people become the majority, the imaginary walls will crumble and the hologram of war will disperse into a whirlwind of collective consciousness. Only then will corrupt leaders fall, causing a political earthquake that will destroy the remnants of their fascist regime. Once this happens, the real post-war period will begin, and the doors to a better future for a country currently unaware of its potential will open.

We are a long way from changing the collective awareness of the uneducated masses that have been poisoned by fear. It’s an even longer journey toward tearing down the walls among poor people, to changing the kleptomaniacal government and the democracy that reeks of oligarchy. Luckily, hope arises when we think of the selfless and courageous people who have ignored these walls and who see only people.

Let us remember the heroic and humane act of Srdjan Aleksic who saved the life of another who was only guilty of having the wrong name. This brave young man Srdjan saved Alen, but was not able to save himself. Srdjan not only saved Alen, he redeemed our hope in humanity and caused irreparable harm to those trying hard to maintain the walls of improper identity and division among people—walls that stand on the foundations of unenlightened minds and weak souls.

The flag of common Interest

In order to awaken the hope of a better future for our children we can take a look at more recent events. Let’s recall the rainy spring of 2014 when terrible floods and mudslides aroused the long forgotten humanity, bravery and selflessness of people across the region. In a time of collective hardship, the walls, both real and imaginary, crumbled. One man rushed to the aid of another without a doubt or second thought. In those difficult days, the names written on the doors of the flooded houses no longer mattered; all needed help equally. And help was given.

If we stop for a moment and think about the two instances mentioned, which both rouse the hope for a brighter future in all Bosnian citizens, we will recognize some fundamental principles that are necessary for us to achieve our common and universal needs and aspirations. We all need food, water, employment, shelter, personal security for ourselves and our families, protection of fundamental rights, equality, dignity, and so on. If we start listing the things that unite people, we could go on forever.

Let us unite the flag of common interest, cooperation, tolerance, respect, friendship, and love. Let us dispose of the toxic and malignant politics of exclusion and concentrate on the benefits of a healthy society that takes care of our children and allows them to grow and learn in a healthy and prosperous environment and to fulfill their own needs.

We need to improve ourselves, raise awareness, and wholeheartedly and reasonably work towards improving the quality of our lives and society. This kind of thinking emerges as a consequence of brave acts such as Srdjan’s and those brave men and women who rushed to the aid of people in need during the floods. These are the underlying principles of a healthy society, and this is the only way to a better tomorrow for all of us.

In Bosnia, there certainly exists an entire society that does not belong to its political reality. This is a society that does not hate and that learns. This is a society that works and trains and that respects and cherishes good people. However, this healthy tissue of Bosnian society is politically underrepresented, censored by the media, and physically disjointed. Only when this tissue unites to become a healthy and strong political and social body will Bosnia enter a true post-war period marked by the progress of all its citizens. 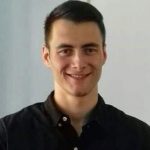 Robert Budimir is a Balkan Diskurs correspondent from Sarajevo, Bosnia-Herzegovina.

Markings on the hiking trail near Mahnjača encourages the inhabitants of Željezno Polje to discover the beauties and potential of their mountainous village. This is a story about how the joint work of mountaineers and other locals opens the way to new recreational and economic opportunities. When driving from Žepče to Zenica in central Bosnia …
August 3rd, 2021