Rudolf Slomo, known as “Rudi”, was one of Sarajevo’s unusual legends. A man who, left to his own devices, lived a bohemian lifestyle. He loved people and many knew him as a good man who lived a full, tireless, and active life. Rudi was also a member of the deaf community.

Rudolf Slomo, known as “Rudi”, was one of Sarajevo’s unusual legends. A man who, left to his own devices, lived a bohemian lifestyle. He loved people and many knew him as a good man who lived a full, tireless, and active life. Rudi was also a member of the deaf community.

It was June 2017 when I went to meet Rudi. It had been a while since I’d seen him last. I had been tasked with photographing a man or woman from the older generation and finding out more about their life during the time of the former Yugoslavia—someone who could compare the past and the present, talk about reconciliation, and tell us what they believe is lacking in today’s society.

I remembered Rudi often went to the graphic design company “Pismolik”. Even though he’d retired a long time ago, he still had a routine of going there every day to say hello to his old colleagues, bring in news he had heard around town, drink a cup of coffee, and just have a friendly laugh with everyone.

As soon as I entered the door, I surveyed the room in search of him. He wasn’t there, but arrived shortly thereafter. I happily explained to him: “I need to take a portrait of you and I want you to tell me some stories about your life during the Yugoslavia times.”

He was wearing a Kid’s Festival t-shirt and an accreditation hung around his neck as he was helping prepare for the 12th consecutive opening of the Kid’s Festival in Sarajevo.

“I’m not in my best attire,” he said playfully. He had a custom of putting on his favorite white suit and one of his many ties for special occasions. We decided to take a walk to the Svjetlost Park together. It was a gorgeous, sunny day and he talked to me about his life along the way.

Rudi told me he was born in Sarajevo in 1950 and then immediately jumped to the topic of education and about how there would be a change in location of the school for deaf children. Rudi was one of the few members of his generation who had had the opportunity to witness the development of this school from its establishment to present day. “The world of the deaf is quite small and we try to maintain strong interpersonal relationships and friendships,” Rudi explained.

Rudi was abandoned as a child and, although no one knows for sure where he was born or what his heritage is, his peers believe that he was born in Pale and was abandoned by his mother shortly after birth. That’s when the home for children without parents took him in.

As a young man, Rudi became an active member of the Association of the Deaf. He also loved traditional folklore and acting and often traveled across Europe to go to competitions and performances, where he proudly represented Bosnia and Herzegovina.

Later, Rudi worked in Hotel Europe for eight years. After that, he worked for the graphic design company “Pismolik” until his retirement.

Although he never had a family of his own, his considered his family to be the world of the deaf, the city of Sarajevo, and all those people he loved and who helped him in life.

I again asked him about his Kid’s Festival t-shirt and the accreditation he was wearing. He explained that had been a festival assistant for twelve consecutive years. I later decided to stop by the festival and when I first arrived, I saw his smiling face. He was so proud to be part of the team and I realized that, for him, the little things in life were priceless treasures. People were all he needed and all he had.

We then shifted our discussion to the topic of reconciliation. He explained that he believes in God, but doesn’t identify with any religion because he feels that religion has often been responsible for creating division and tension between people. All he ever wanted in life was to be a good person and help people who need it. His advice to others was to do the same – to be human, to be a humanitarian, and to live from love and friendship. “These are the things that keep us going and make us better people,” he said.

I took some photos on the way from the Svjetlost Park to the Cathedral while we talked. He stopped to say hello to every acquaintance he ran into along the way.

One morning, around a month later, I saw that one of the photos I had taken of him had become the “Photo of the Day” on the Balkan Diskurs Instagram page. The following day, I found out that Rudi had passed away.

What many people remember and will continue to remember about Rudi is that he was a man of his word. He always forgave, loved, and encouraged love, mutual respect, and reconciliation in every way. Thus, this piece has been written in remembrance of Rudi, a Sarajevo legend in his own right. 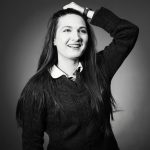 Alma is a Balkan Diskurs trained youth correspondent from Sarajevo. She is a student at the University of Sarajevo's Faculty of Medical Sciences. Alma was born with hearing impairments and finished elementary education in the Center for Hearing and Speech Rehabilitation. Today, Alma is a human rights activist and musician working in several Sarajevo-based non-governmental organizations. She is a fellow of the European Forum Alpbach and the Humanity in Action program.

Anything is possible with the right support

The Down Syndrome Center from Banja Luka is the only social welfare institution in Bosnia and Herzegovina building capacity for people with Down Syndrome through its social rehabilitation program.
November 18th, 2021