It’s been exactly one year, seven months, and 28 days since I smoked my last cigarette.

Anyone who has quit smoking knows how difficult and painstaking the process is. From the time I was in high school until the age of 29, I saw cigarettes as a reward, a comfort, a five-minute break from work or lectures, and an ideal way to spend time while waiting for city transport, but, in reality, it was just a habit that was very difficult to give up on.

As usual, I would prepare my cigarettes and coffee right after I woke up. The combination of that morning coffee and a cigarette is really good. So good that even today, nearly two years after I quit smoking, I still envy smokers for being able to partake in that morning ritual.

I never imagined that I would say goodbye to my long-standing habit that morning.

In the latter days of my addiction, I noticed that I began to cough a lot, but I didn’t pay much attention to it. My mother was very worried, and she said that I should stop smoking, to which I always responded negatively, although I really did wan a life without cigarettes. Some smokers advised me to switch cigarettes, but I was so loyal to the brand I was consuming that even that seemed like a big change for which I didn’t have the courage.

It was a pleasant, sunny September day when I went with friends to the local pool. I packed my cigarettes and went to go take part in one of my favorite activities – swimming. I remember it well, there were five cigarettes left in the box, which I determined would be enough to last the duration of my stay at the pool.

Although I was already coughing, I lit a third cigarette to go along with my afternoon coffee. Suddenly I began to think about how my fitness will deteriorate more and more in the future and, at that moment, something just snapped inside of me. As I was holding a cigarette in my hand, I turned to a group of my friends and announced that this was my last cigarette. I remember how they laughed, thinking I was kidding. However, rather than enjoying what was once one of my favorite activities, swimming now often turned into torture due to my lack of physical fitness, which I had difficulties accepting. I knew that smokers were less fit and got tired more quickly than did non-smokers, but that was truly the day that convinced me of that fact.

To this day, I’ve kept the box that holds those two remaining cigarettes as a reminder of how hard it was to quit, but also as a proud reminder of the decision I made and stuck with it.

The Day After My Emotional Break-up with Cigarettes

The second day was twice as hard and I remember how I managed to get in a fight with almost anyone with whom I came into contact, so I made the decision to stay home. I thought I would probably lose all my friends if I continued to fight with everyone. I was lazy that day, and I laid around wondering why cigarettes were so important to me and what they represented.

When someone wants to quit smoking, then they simply have to learn to live without cigarettes. From today’s perspective, to quit smoking is to learn how to do all the things we did as smokers, but now as non-smokers. If we “survive” all the situations where cigarettes were an important factor, then I believe that we would be fortunate enough to say that we are truly non-smokers.

The mobile app that I used at the start of my journey, and that even still use today, is called “Smoke-Free”. I felt a new sense of motivation each night when I received an electronic badge in the app that marked another day without cigarettes. Collecting those electronic badges gave me immense satisfaction for some reason.

A mere 20 minutes after quitting, your blood pressure decreases, and your heart rate normalizes. The app informed me that the carbon monoxide in my blood had dropped to normal levels within 12 hours. I received a second notification that my circulation had improved significantly and that my lung function had increased, which was noticeable when I breathed. I experienced an occasional cough for the first nine months, which then disappeared right around the time the app informed that the coughing would subside. 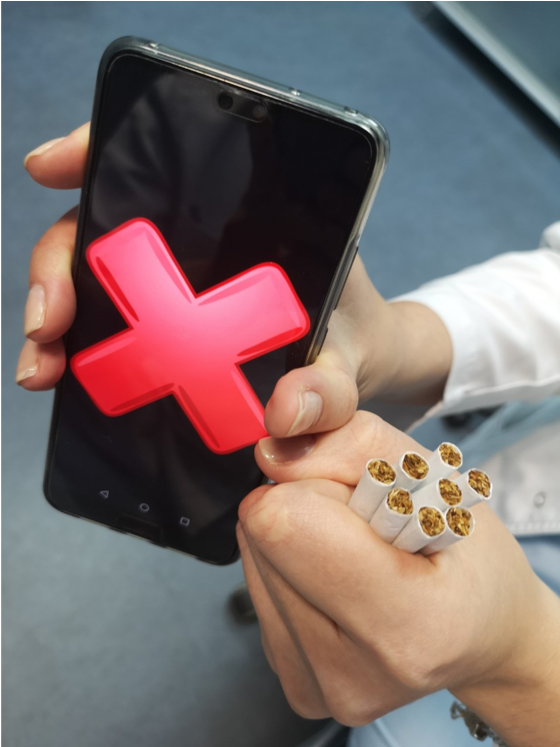 Today, the 603rd day since I gave up smoking, the application shows me that I have saved 2,657.00 BAM. I now use that money to travel, which makes me happy and keeps me far away from the temptation of cigarettes.

Physical Activity is a Good Ally

For many, weight gain after quitting is a common occurrence, so you should try to increase your physical activity and adjust your diet as much as possible. I decided to eat whatever I wanted for the first month until the worst part had passed. The fact that I was already thin made it a bit easier, so the eight kilograms I gained wasn’t so terrible.

Walking after work gave me great pleasure because I was finally able to walk five kilometers without experiencing difficulties breathing. Every time cigarettes entered my mind, I would get up and go take a walk through nature or the city. After a certain period of time, I started running, and the first time I ran five kilometers was really a special day for me.

It all felt like I was being reborn. You simply feel healthier and more energized. You can easily wake up in the morning and your brain works much better.

One of My Best Life Decisions

Quitting cigarettes requires a lot of work and effort, but today I consider it one of my best life decisions.

It wouldn’t be honest to say that I never think about cigarettes, but unlike the first days and months after I quit, the thought now only crosses my mind for a few here and there. No matter how strong our bond with cigarettes is, we very often only smoke out of boredom.

In 2018, the World Health Organization stated that tobacco is the leading cause of preventable deaths. Eight million people die annually from the effects of active or passive smoking, and one smoker dies every six seconds. Lung disease, stroke, heart attack, and cancer are the major diseases associated with the consumption of cigarettes. In the 20th century alone, more people died from the effects of smoking than in the First and Second World War combined.

Today, I read every text that presents information about the harmful effects of smoking, whereas before and I would skip such media content. And, every time I read about the consequences of smoking, I’m proud and happy that I’m no longer a part of those dark statistics.

This article was submitted as part of the Klima Bez Dima Multimedia Contest. Klima Bez Dima is part of the “Reducing Health Risk Factors in BiH” project supported by the Government of Switzerland and implemented by the World Bank in BiH in partnership with entity Ministries of Health, entity Public Health Institutes, and other local stakeholders. To learn more about the Klima Bez Dima initiative visit bit.ly/klimabezdima and sign the petition to support a smoke-free BiH.

Mirnes Bakija is a Balkan Diskurs trained correspondent from Sarajevo. He holds a Master's degree in Communications from the Faculty of Political Science in Sarajevo. He is currently a journalist at the Radio Free Europe as part of the Regional Reporting Fellowship program. He most frequently reports on topics including human rights, marginalized groups, and women's rights. Mirnes has collaborated with many media and civil society organizations in BiH, such as eTrafika, BIRN, Mediacentar, Tacno.net, Zamisli.ba and others. He is the editor and coordinator of the "Može i drugačije" project and publication, and he was one of the members of the correspondence team on the "Love Tales" project. Mirnes has won three journalism awards, two of which are for his work on preventing hate speech against marginalized groups, and the third for his photographic work within the MIR photography competition.

The Scars of Transition: We Were Unified Once

The peace that the Yugoslav people once built has been destroyed; all because of the stereotypical claim that the hatred between the nations of Yugoslavia was ever-present. This hatred was fabricated by the ruling elites who wanted to teach Slavs how to be civilized and democratic.
January 28th, 2015