The departure of young people from Bosnia and Herzegovina (BiH) in recent years is one of the most pressing topics, and though talked about often, no solutions are offered. When speaking about leaving Bosnia and Herzegovina, the focus should not only be on young people, but on all generations. The idea that the most educated and capable people are leaving the country is also no longer representative.

A survey conducted by Balkan Diskurs among 378 young people confirmed that 38.1% want to leave the country, while 47.6% said maybe and 14.3% said they wanted to stay. To the second question, “What are your reasons for leaving the country?”, 42.2% of young people stated living conditions, 38.4% mentioned financials, and 9% cited additional education as the reason for leaving.

“I am a person who wants to create and contribute to a better tomorrow. My life path is paved with many interests. I want everyone from my home country to live well, decently. Since I am studying mechatronics at the Technical University in Graz, I am interested in the development of technology, which is unfortunately neglected in our country,” says Nemanja Mijajlović for Balkan Diskurs.

He decided to leave BiH due to, as he says, a lack of prospects and poor living conditions.

“The family is essentially the most important factor for the development of a young person, especially in a country like Bosnia and Herzegovina, where one cannot rely on the system. I continued my education in Austria, which takes care of young people and where the education system values knowledge and expertise. One of the reasons for me to leave my home country is that the [Bosnian] government does not take care of young people – how they live, what they do, whether and how much they are educated,” says Nemanja.

Most young people do not see their tomorrow here and want to build their lives in another country. This is one of the biggest issues in Bosnia and Herzegovina.

“At the moment, I do not plan to return to Bosnia. What I notice is that my personal development in Austria is completely different from all the values that are considered desirable in BiH. As such an individual, with brilliant ideas and results, I would still not be appreciated. I recommend every young person to read, listen to quality music and watch good movies and to take formal education seriously in order to be well prepared for the life that awaits them,” Nemanja adds.

There are many young people among those who leave for whom opportunities abroad are more tempting than staying here, where unemployment is a huge issue.

However, among these young people there are those who, although aware of the bad, have decided to stay. They try to encourage others to do the same. This includes a young Roma woman named Jovana Barbu.

“I am a student at the Faculty of Law in Bijeljina, an activist, coordinator and project coach. I work in the association “Safe Step,” and am a part-time journalist and field worker on the portal Moja Bijeljina. I would describe myself as an ambitious, stubborn and self-confident girl,” she says.

The position of young people is endangered, especially when you are a minority and you encounter prejudice every day.

“I focus on my personal development and on the Roma community in Bijeljina, because I am one of those who will, with knowledge and spirit, change some things surrounding [her]. Regardless of the fact that I encounter prejudices from people around me every day, with my hard work, and a smile on my face, I stop them from thinking of Roma in terms of [these] prejudices,” explains Jovana.

In her opinion, the position of young people is devastating, and although many of them, as she says, want to stay in Bijeljina, they are forced to seek their fortune elsewhere.

“I think that every young person who graduates from college must find a job and do everything in their power to find a job. The family is very important, because they have a big role in shaping children and their personal traits,” says Jovana.

This young successful Roma woman built her life from scratch while facing disparagement from her environment, yet she decided to stay and build a better future for herself and all people.

“I see my future within the borders of our country. I had offers to go study abroad with paid tuition and scholarships, but I decided to stay here and prove that there is hope for all young people and that it is possible to succeed here. Above all, I have managed to break down prejudices about the Roma. People do not choose their destiny, but they can direct it towards something better,” she states.

She describes how her participation in various seminars and her various acquaintances led her to the invitation by UNESCO to represent Bosnia and Herzegovina and its young people at UNESCO’s annual youth conference in Geneva.

“I am guided by the fact that nothing should be obtained easily and that we must fight for everything in order to appreciate what we get. The main motive for my progress is to believe in this city. I believe that a lot can be done with new energy and a lot of effort. Specifically, the city of Bijeljina is developed and young people have opportunities that they do not recognize, so why would Bijeljina not become a city of students, tourists and hard work in five or six years,” Jovana says optimistically.

The society of Bosnia and Herzegovina has put aside the needs of young people, as well as the conditions needed for their development, although these should be the pillars of every system and every state. 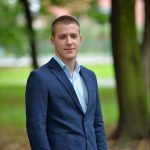 Milan is Balkan Diskurs trained correspondent from Bijeljina and is a second-year student at University Sinergija, majoring in Information Technology. In addition to his formal education, he is interested in non-formal education and is involved in activism. He volunteers at the PRONI Youth Club and attends an academy of the same organization called the PAOR Youth Work Academy.

In the context of the wars that occurred in the former Yugoslavia, it would seem logical to approach the arms trade in South East Europe (SEE) with a sense of apprehension. The question is: does the trade make the region less stable and secure?
December 16th, 2014