It all started three years ago in Sarajevo, when a group of young activists got the opportunity to make a documentary. That’s when the name of the activist movement “District Team” was created. Although they are still an informal group, wanting to become a formal association, young activists from Brčko are finding opportunities. And their activities are numerous.

District Team’s very first activity was the shooting of the film “Children of Dayton,” which aimed to show the reconciliation process after 1995, both in the Brčko District and in the rest of Bosnia and Herzegovina (BiH). The film features high school students, war veterans and famous hip-hop musicians.

“There are various people in the film – such as the Association of High School Students – as we wanted to show Brčko as a positive example of students’ togetherness. They are not separated, as is the case with the two schools under one roof. We have included hip-hop musicians from both Brčko and Tuzla. One of them is Frenkie who has worked on reconciliation through music. We also included war veterans from all three sides, as direct participants in the war. The focus of the film was for them to tell their stories, to show how bad the war really was,” says the founder of District Team, Mirsad Zahirović, adding that the response to the premiere of the film was better than expected.

One of the group’s most significant activities, realized through the film, was the making of a mural by the river Brka.

“The mural shows the symbol of connecting the three former states from the former Yugoslavia – BiH, Serbia and Croatia. It shows how film connects people. This contributed to the advertising of the film itself, because media portals reported on that all over Europe, but also in America. The BBC came to make a documentary about us, so these murals contributed the most to [our] advertisement,” says Zahirović.

Apart from the documentary, District Team continued with projects and activities such as organizing excursions, workshops with war veterans and high school students and a panel discussion for musicians attended by famous hip-hop musicians Kontra and Marčelo.

“Doing so, we wanted to attract young people and talk about some things that the street and the war and reconciliation processes bring, and to show how music has been bringing young people together all these years,” explains Zahirović.

“Mirso and I were sitting at the bar, District Team was still a thing, but we didn’t know whether to do something or not, to continue with our work or to leave it all in the past. Mirso said, ‘Come on, I’ll submit some project, and we will see what happens next.’ That’s how we actually started. Mirso and I are not alone here in District Team, there are more of us in the team. We have started doing some new things, and our goal [is] actually to gather young people and create some new activists, because these children are a symbol of peace and connection,” says Edna Mulić, member and PR of District Team.

Last year, District Team set up a large canvas on the Youth Square in the Brčko District so everyone who wanted could come and write messages of peace.

“The kids would approach the canvas on their own and we thought that it’s the picture-perfect response, since they didn’t care who organized it, under whose responsibility and who were the others writing their messages. They were happy to write those messages of peace,” Mulić points out. 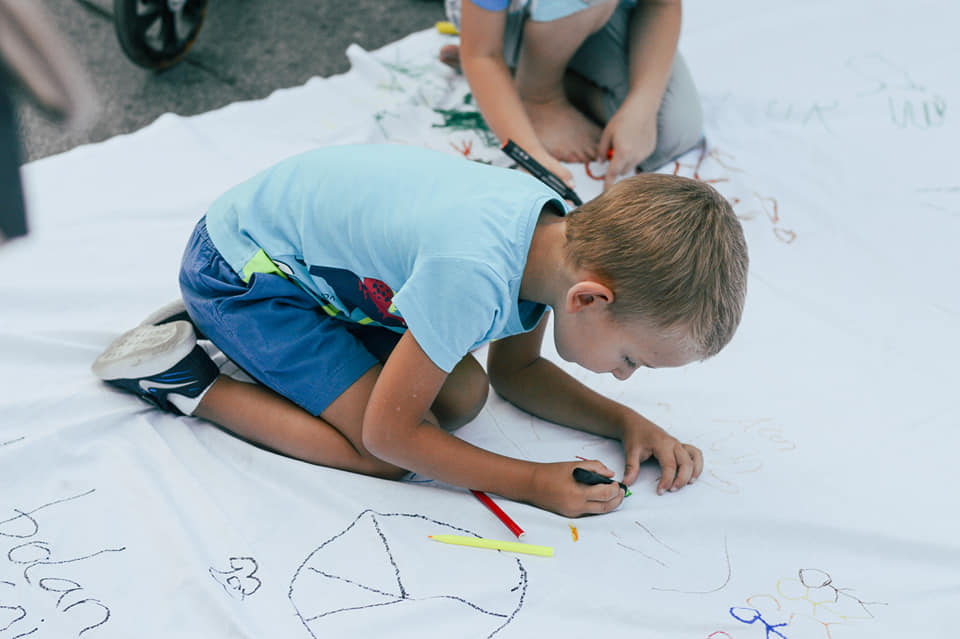 Some of the written messages were: “Three nations, one soul!;” “Bro, how are we not a team when we steal like one?;” “Diversity is our embellishment!;” “Peace is the strongest bridge to the future.”

Due to the corona virus, the young activists do not have a way to organize certain activities. However, this time as well, they have showed their professionalism and desire to work.

The founder of District Team, Mirsad Zahirović, came up with the idea to hang a slogan on the bridge over the river Brka reading, “Heroes come from the street, not from an unrealistic film.” In this way, District Team wanted to pay tribute to Srđan Aleksic, but also to all the people who are currently at the forefront of the fight against COVID-19. 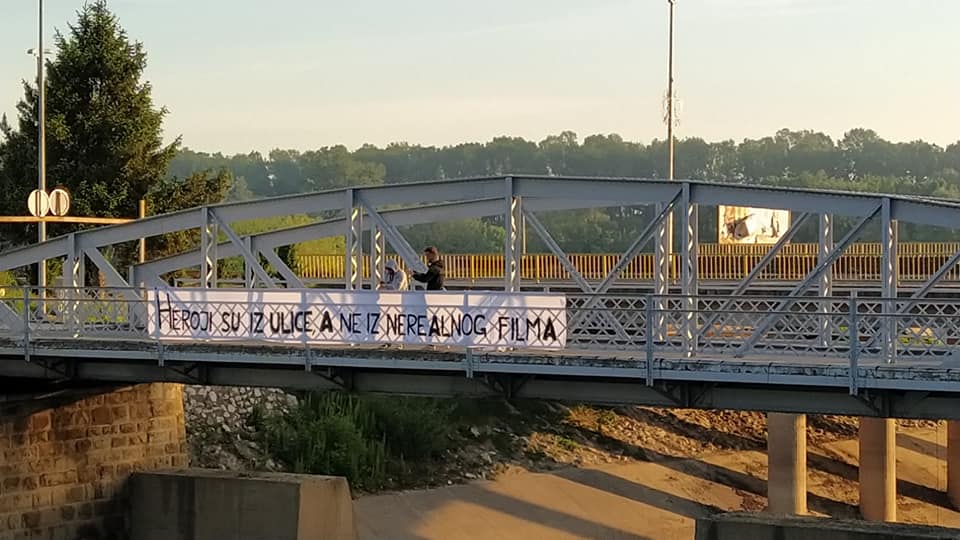 In 1993 Srđan Aleksić, a young man from Trebinje, tried to defend his fellow citizen Alen Glavović from an attack by members of the Republika Srpska Army. The soldiers beat him, after which he ended up in a coma, only to die in the hospital in Trebinje.

Last year, District Team submitted a request to the Brčko District Assembly to name one of the bridges on the Brka river Srđan Aleksić, but that request has never become part of the agenda.

“We sent letters to all deputies individually, but it never came up on the agenda. We didn’t even get an answer. They could at least try to send us an answer,” Zahirović explained.

The fact that the activists do not have the support of government institutions is best illustrated by an event last year. A humanitarian action,

“Donate for a school snack,” was held to raise funds for socially disadvantaged children. With the help of two hairdressers who worked voluntarily, they collected a thousand convertible marks. But the Government of the Brčko District of BiH was not a direct or even indirect participant in the organization of the activity.

“We do not have any support from government institutions. Each and every activity has been organized under our initiative. No one from the government dared to ask what is happening, why these people are doing what they are doing. First of all, it is sad that we have to organize those things in the first place, yet I still think that the budget that the Brčko District has can help those socially endangered children in any way, as it all went to school kitchens so that the children could have snacks. So I think they can support those kids too. All the support that came from some catering facilities, some sponsors that we found, projects that we applied for and received some funds to make our activities happen,” explains Mulić.

One of the latest activities organized by District Team was completed as part of the project “Hoćemo l’ više?” developed by the association Altteatar. The theater performance was held in Brčko on August 12, 2020 under the title “And where are you going?” and was aimed at addressing some of the issues young people face in this local community, including unemployment issues and lack of opportunities.

In response to the number of young people leaving the country, the group also started a symbolic “bell ringing” that resounds throughout the city at five to twelve. It reminds the government of the youth of the city, and that the government should enable them to stay here, to bring their knowledge in their city and country, and not anywhere else. These young activists have shown how much can actually be done with great desire, will, effort and empathy. Although they say that they have wanted to become an association for a long time, they also say that the “charm” of their work is actually that, despite the lack of funds and “non-existence on paper,” they continue to do great things and plan new projects.

“Currently, we have two projects going on, and we plan to apply for new ones and to continue to gather young people as much as possible,” says Mulić.

“Young people must be active participants of change, that is, to bring about change and to be a part of change. Regardless of whether it is a governmental or non-governmental sector, they must be engaged in their local communities and be a part of positive stories. I think that with activism we can achieve a lot of things, and that young people should aim to become activists, participate and follow what is happening in our country, because we cannot change if we have no idea what is happening. We cannot just say we are not interested, we need to be a little more interested in ourselves, as well as in our country and what awaits us tomorrow,” Zahirović concludes.

Photographs: Archive of the District Team. 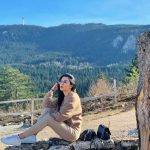 Alma Mustafić is a Balkan Diskurs trained correspondent from Brčko. She has a degree in Political Science and is currently a master's student at the Faculty of Economics in Sarajevo, studying International Economics and European Integration. Alma loves photography and is interested in working for NGOs, either in journalism or project writing.