“I think that the culmination of the epidemic and the fear from death made art shine with its full splendor, giving people back hope and reminding them how unimportant politicians really are for their lives. Turn off the TV and they disappear,” – Jelena Medić on the occasion of her exhibition, “Budni,” which debuted after the elections in Bosnia and Herzegovina.

The unique exhibition, “Budni” (“The Awaken” in English) replaced the faces of politicians on pre-election billboards with a new set of smiling faces after the general elections were held in Bosnia and Herzegovina (BiH) in November 2020.

The goal of the exhibition was to bring new hope and a good laugh to people. The exhibition was shown in the streets of Banja Luka, Sarajevo, Mostar, Trebinje, Zvornik, Bijeljina, Tuzla, Doboj, Prijedor, Novi Grad, Brčko, Modrića, Derventa, Prnjavor, Gradiška, Laktaši, Čelinac, and Kotor Varoš.

As the artist Jelena Medić said, people started gathering in large groups, laughing. It was already a sign of new hope.

She presented her exhibition “Budni” to the public two days after the elections, because, as she says, the public’s attention on politics was enormous at the time. It was wise to take that attention and turn it to something more positive.

“It seemed logical that in the year of the economic crisis, after the elections, there would be a lot of empty advertising spaces, which, with a little understanding and thinking, could serve as advertising for what is really important,“ she explains.

Using photography, she presented 25 people that she believed had the capacity to free themselves from their own and others’ images of themselves to enter into a deeper process of self-discovery.

“People are waking up slowly. Not just here, but all over the world. Some wake up willingly and joyfully, some by force, and some, unfortunately, will not wake up even at the cost of their lives. These misfortunes are certainly the result of a long sleep walking, too much alienation from the body, too much reliance on systems. And a man is not a screw, no matter how much he once wanted to be simplified to that extent. Art has a way of showing people that, if they are willing to see it,” says Jelena.

She called the “Budni” exhibition “one of the most successful pandemic projects.”

Some of the successful people whose photos adorn the streets of Bosnian cities are photographers Tea Jagodić and Tajana Dedić Starović, and actor Zlatan Vidović. The three of them, each in their own way, experienced the “awakening” process that Jelena describes, not only in front of the camera, but also in front of the entire population.

“It was interesting to see that someone else was photographing me in the studio for the first time, since I have been working on my own for ten years. I really liked that change. It was unusual in the beginning until I got used to  it,” says Tea Jagodić.

Jelena wanted to photograph people and their personalities. She wanted to move away from the commercial photography that she was fed up with.

“She mentioned some possibility of creating a photo calendar. So at that moment I couldn’t even imagine that our photos would be part of a phenomenal calendar, much less that it would be an exhibition on billboards across the country, which was a really amazing idea,” Tea added.

According to her, her family and friends were very happy to see her on the billboards, immediately letting her know the location of her billboard.

“A lot of them go to work using these roads, so I greet them every morning at the entrance to the city, which I liked in the end. When I first approached the photograph, the billboard, for publication, archive, and memory and saw myself, I was shy in front of myself because it was too unusual for me. Later it became completely normal for me because I am part of it together with a large group of people and we are doing a phenomenal story together. I am not alone, although we all stood on our own in very large formats,“ she explained.

Successful Faces Instead of Already-Seen Ones

What Tea noticed was that the unusual times we all find ourselves in make people do positive things and try to rise above evil.

“If we don’t make ourselves feel better, at least for one day, no one will do it for us. If we were always well and everything was as it should be, I think we would be lazy and not do a lot of things. This exhibition on billboards is an example of a strong symbolism where no further comments are needed – artists who ‘removed’ politicians from billboards across the country,” Tea says.

Another photographer who found herself in front of the camera was Tajana Dedić Starović. For her, this was an amazing experience.

“The way Jelena approaches the model is really specific. I am both a photographer and a psychologist by profession, but Jelena swept me off my feet. She is so good. I felt really comfortable, but also naked. It was wonderful when the project was finally realized, when all the wonderful photos and those wonderful people appeared on billboards. I felt that I was part of something very important and big,” said the young artist.

She noticed that the public was interested in the project, and people mostly saw it as something beautiful and likable.

“I think awakening happens in times of crisis. Everyone is trying to find their own place and, in the end, some kind of explanation. There is nothing wrong with that, as long as we manage to stay rational and consistent with ourselves and our beliefs,” she says.

Actor Zlatan Vidović, who is no stranger to this experience, also stood in front of Jelena Medić’s camera.

“Jelena Medić and I have known each other for a long time. We also worked together on some theater plays that she directed, in which I acted. She has also photographed me before, but this was really a new experience, which is very valuable for me. It was a great pleasure to be a part of this project. It was an even greater pleasure to see photos of successful people on billboards instead of politicians and all that nonsense that bombes us every day. I think that this is a great refreshment and a real thing that really happened on Jelena’s initiative,” he says.

He believes that more projects like this one are needed in the future, because the Bosnian society, as Zlatan explains, is currently lethargic, living in a time that offers no answers.

“And we are somehow introverts, and we don’t ask a lot of questions. One of the ways to ‘get out’ of such a state are exhibitions like this. Culture must ask many more questions, to awaken and be socially engaged, and to provoke. Young people need to take matters into their own hands, because their energy is what will start and turn this world. And this world is currently in a very bad state,” Zlatan says.

On the way to this successful exhibition, Jelena Medić left commercial work and followed her dreams as an artist.

“Courage is the other face of fear. The greater the fear, the greater the courage. I could clearly see that I would get sick if I refused to accept whatever was coming next, and the very thought of illness scared me. So I understood it as a lack of choice. And not having a choice is the strongest motivation,” she explains as she thanks the artists who stood in front of her camera for the project.

They trusted her, and some of them, as she explains, gave in easier, some harder, but in the end they all opened up emotionally and with each of them she experienced, at least for a moment, the beauty of full presence and connection.

“The experience that each of us went through individually, left a mark on the entire group and the changes that happened in us will inevitably initiate similar changes in the observer. It is that invisible power and beauty of art,” emphasizes Jelena.

As she explains, she is now concentrating on returning to a state of internal peace in order to write the novel she has started.

“The illusion of ‘changing the world’ that the exhibition brought me is very tempting, so I still, as before, firmly believe that I can change something. But I deeply believe that all change happens inside. Thanks for asking me that. I will allow myself to be inspired again. Producer Zoran Galić from Vizart and I would like to continue the collaboration and do something magical again. We will see what life thinks about it,” she concludes.

Jelena Medić was born in 1980 in Novi Sad, and in 2000 she came to Banja Luka to study, which was the right moment, she says, to start looking for who she really is. She graduated with a degree in acting and dramaturgy, and everything she did in her life, she did, “as if playing some game.” In the end, she says that the subject she will deal with for the rest of her life is man and his internal character. 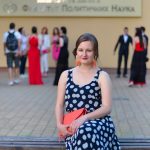 Andrea is a Balkan Diskurs trained youth correspondent from Banja Luka and holds a Master’s in International Relations from the Faculty of Political Sciences in Banja Luka. Andrea is interested in volunteering and international youth cooperation.

What do their fates mean to the world - the fates of those nameless, lads who got stuck in trenches far away from home? We could only pin clichés onto their fates, but in my mind, I have countless questions about the colors of the world that surrounded them.
August 23rd, 2014