In Bosnia and Herzegovina, there are more than ten coal mines, representing the largest energy source extracted in the country. Last year’s protests in front of the Government of the Federation indicate the government’s laissez-faire attitude towards miners who put their blood, sweat, and tears into putting bread on the table, sometimes with fatal results.

Milorad Naćić, a mining engineer from Ugljevik, knows what it is like when a family depends on the money earned in the mine. He has many relatives on his father’s side who work on the strip coal mine “Bogutovo Selo.”

“As a child, my father took me to the mine, and when I saw all those huge machines and I experienced my first ride in a truck, my desire to engage in mining came to life. As the years went by, I finally decided to enroll at the Faculty of Mining and Geology in Belgrade at the end of high school. During my studies, I realized that mining is one of the main pillars of the economy of every country. If we look around, everything that is not made of wood was excavated by a miner,” says Naćić.

As he explains, people would not have cars if not for the iron and aluminum excavated by miners. There would not be electricity without coal mines and thermal power plants. There would also not be heating, copper installations, or brick and concrete buildings made of certain types of clay, which miners also excavate.

“After my studies, I got a job at the mine Ugljevik, and I saw that the situation was very difficult. We work in difficult weather conditions, and in the summer, it is difficult to breathe due to dust. In other seasons, we struggle with rain, mud, and slippery tracks for trucks loaded with 120 tons each. Electric excavators which go up to 6000 volts can also collapse or get stuck in the mud. Every day is a new struggle,” Naćić says.

In addition to the Ugljevik coal mine, in the Republika Srpska (RS) there are six more mines, but not all mine coal. Coal is mined in three locations – Gacko (lignite), Ugljevik (brown), and Stanari (lignite). Gacko and Ugljevik produce coal for the needs of thermal power plants (98 percent of sales) and mass consumption.

According to the data of Elektroprivreda RS (ENG: electric power industry of the entity of Republika Srpska), the capacity of the Gacko mine is 2.1 million tons of coal, and the Ugljevik mine 1.75 million tons per year. Since the existing surface mines are at the end of the reserves, opening new ones in the next 3 to 5 years is necessary. The mechanism for mining also requires new updates.

According to the Federal Ministry of Energy, Mining and Industry, the mines in the Federation of Bosnia and Herzegovina (FBiH) employ 6,800 miners. Of those, 2,000 are disabled. Workers in all seven mines in FBiH (which fall under the jurisdiction of Elektroprivreda BiH) protested last year, demanding higher wages and stricter adherence to the performance rulebook. The problems that miners face daily have surfaced.

The mining business alone is difficult, but workers’ positions in the industry are further aggravated by their poor working conditions, which has resulted in demanding labor rights through strikes. Irregular wages, substandard working conditions, constant uncertainty of job retention, and even life-threatening circumstances give a complete picture of miners’ status.

These circumstances triggered the protest in front of the FBiH Government building. The severity of the situation is evidenced by the fact that the mines owed about 500 million KM to the tax administrations and health and pension insurance funds in FBiH. However, the strike ended after several days, and an agreement was reached with Elektroprivreda BiH.

“Chants of ‘We will not give you charcoal’ [ BCS: Ne damo vam ćumura] echoed at the last protest of miners in front of the FBiH Government, describing the best case scenario in our society. There are many reasons for the protest itself – the new way of calculating salaries is only one of them. What is more important is the long-term issue of non-payment of contributions, which creates problems for miners to retire or go to the doctor, as well as poor working conditions – dilapidated equipment and lack of modernization resulting in poor mine productivity,” says Faruk Hadžić, a lecturer at Sarajevo School of Science and Technology (SSST).

He points out that in BiH, the surplus of administrative staff is a huge problem, which is starting to be discussed more and more.

Šerifa Buševac, geology engineer and master’s student at the Faculty of Mining, Geology and Civil Engineering, University of Tuzla, describes miners as people with hearts as big as mountains.

“The biggest response to humanitarian action was from the miners. Energy transition, conversion of mining areas, and miners’ disposal are burning problems in the world and our country. Miners only seek to protect their rights and what belongs to them, which often leads to authorities’ misunderstanding,” explains Buševac.

As Buševac explains, the miners work every day to put bread on their already modest table. While there is no official number of dead miners, they fight for their survival day by day. Therefore, it is necessary to remind the public of their sacrifice to improve workers’ rights in BiH. 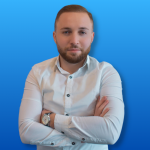 Ismail is a trained Balkan Diskurs correspondent from Brčko. He studies economics and is a senior youth worker at the PRONI Center for Youth Development. Ismail is also a certified peer educator, youth worker, and social media manager. He is actively involved in youth activism and financial reporting, in addition to moderating educational workshops. He is also a correspondent for the youth web portal Fontana.ba. In his free time, he also enjoys photography and learning graphic design.

Wagner: "Germany made peace with the wartime enemy.
January 23rd, 2015