Patriarchy is often cited as one of the main causes of the degradation of women in society, and of gender-based violence. Tradition and custom in a patriarchal system prevent women from saying “No!” to such a system of false values. However, today we have newer generations of girls and women who are increasingly improving the status of women in BiH. society.

Martina Planinić, a professor at the University of Mostar’s Faculty of Philosophy who teaches the course “Media and Gender Roles,” asserts that under the patriarchal system, people often mistakenly underestimate women’s role in society. She observes that everyday heroines are present in society achieving great things in sports, education, science, art, culture, and other professions traditionally assumed to be exclusively male spheres of activity.

Selima Dračo, a feminist activist and student at the Medical Faculty of the University of Zenica, explains that patriarchy is “a chronic virus of our society that does not cause as much damage until it is re-awakened.” She says that although the virus is always present, when it receives little attention, there is a widespread misconception that it does not exist.

“It is fascinating how many years it has existed, and worrying how many years it will continue to exist … I do not want to be pessimistic, far from it, but no matter how hard we try to eliminate it from planet Earth, every day a new male individual who is insidiously armed with patriarchal values will appear,” explains Dračo.

Despite the pervasiveness of patriarchy, the position of women and girls in Bosnian society is changing, albeit in small steps. Dračo points out that we have a new generation of brave and fearless fighters who are ready to repay their mothers for raising them properly.

The UN Women Handbook on Reporting on Gender-Based Violence states that women are victims of violence only because they are women, and because patriarchy attributes to them a lower social status. Depending on the context, this status predisposes them to verbal and physical violence, which may even extent to murder.

Professor Planinić explains that in patriarchal societies, many men are convinced they can abuse women without paying any consequences, despite laws criminalizing violence.

“Violence is not a private matter concerning spouses; it is a cancer of our community that threatens families. Because many women lose confidence in the stability of the family where there is a danger of violence, they tend to leave their families and communities. We must not forget that domestic violence also affects children who suffer physical and psychological consequences. Those who support the patriarchy should think about these facts because no woman deserves torture and misogyny during her life,” explained Professor Planinić.

Patriarchy spreads sexism, chauvinism, and misogyny, explains Professor Planinić. This type of negative behavior has become especially socially acceptable with the advent of the internet and social networks. According to her, these developments ushered in an era of online violence, revenge pornography, and other forms of virtual abuse. In addition, she emphasizes the support of the patriarchy in religious institutions where women who fail to submit to male authority are portrayed as sinners.

“Often religious leaders believe that only a submissive woman can be a good woman. Thus, many religions have male leaders who spread views on male superiority and female inferiority. In addition to religion, patriarchy greatly influences conservative political parties. Despite technological and social advances, the patriarchy has a well-built foundation that is resilient to any change.”

In order for Bosnian-Herzegovinian society to solve these problems, the professor explains that education needs to promote good will and a desire for change.

“Any education should be based on the clear principle that gender equality must be a value that is common for women and men. As many men as possible should be involved in various programs against violence against women and gender discrimination. Men who respect and honor women should be an example to bullies and those who abuse their power to the detriment of women. It is also necessary to eradicate harmful prejudices about masculinity, and male superiority, i.e., aggression, arrogance, and complacency must be understood as signs of cowardice’s helplessness, and behavior,” explained Professor Planinić. She adds that we should work on spreading women’s solidarity and mutual support, as well as normalize the fact that victims of violence are not guilty.

According to Dračo, the position of women in BiH is improving. She explains that while talking to middle-aged women, she realized that while many are hesitant to step out of their comfort zone because they think it’s too late, they nevertheless nurture, raise, and mold their daughters to be fearless in standing up for their rights and safety, fearing no one but God.

“This gives rise to a new generation of brave, fearless female fighters who are ready to repay the mothers who raised them properly by destroying something that made their mothers oppressed and timid without the courage to oppose misogynist men,” said Dračo. 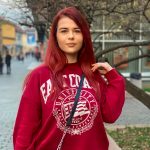 Elma is a trained Balkan Diskurs correspondent from Zenica. She is a student at the Faculty of Economics at the University of Zenica, in the Department of Management. She is a longtime activist and volunteer. Recently, the focus of her activist engagement has been on human rights, gender inequality, marginalized groups, and war issues.

The young married couple Ines (33) and Mario (32) Zović from Zenica have been together for four years, married for the last three. Their love was capped off by the birth of their daughter Nora.
February 11th, 2021