The Drina River, which once formed the border between the Eastern and Western parts of the Roman Empire, and today, in eastern Bosnia and Herzegovina, forms a natural border with neighboring Serbia, has been facing a waste problem for years

At the beginning of 2021, there was an ecological catastrophe. Due to the cracking of the sprocket, approximately four thousand cubic meters of water were deposited on the crown of the dam of the Višegrad Hydroelectric Power Plant. Everything that the river picked up from the shores, be it from wild dumps or waste deliberately thrown into the riverbeds, found its place in Lake Drina. The disaster also posed a danger to the work of the power plant itself. The Eco Center Višegrad Association is aware of the problem and is fighting in various ways to solve the problem of waste disposal as efficiently as possible.

“The ecological catastrophe on the Drina River is a long-term problem we are facing. It is a result of inadequate waste disposal. There are numerous landfills on the banks of the Drina River which, due to heavy rainfall and high water levels, are washed from the banks into the water and end up in Višegrad,” points out Dejan Furtula, president of the Association.

The Association believes that the problem of waste cannot be solved easily. It is a painstaking process and the issue has been affecting the Drina River for 20 years.

“Years ago, catenaries were installed to stop waste in certain parts, but without success. The problem needs to be solved from the very root, and these are the landfills located on the banks of the rivers Drina and Lim,” says Furtula.

Two years ago, a trilateral meeting was held between the responsible ministries of Bosnia and Herzegovina (BiH), Serbia and Montenegro, and the mayors of municipalities in the Drina basin. The focus of the meeting was the waste issue. According to Furtula, the meeting announced the formation of teams that would work on the registration of illegal landfills in all three countries and the installation of video surveillance in certain parts and banks of the rivers. Unfortunately, the plans have yet to be implemented.

This has not stopped activists from warning and reminding these institutions to take notice of this problem, because the entire ecosystem is gradually being endangered.

“This is a very serious problem, so much waste in the Drina River certainly endangers the entire ecosystem. Microplastics and many toxins are now part of our river, unfortunately. Years ago, we also found medical waste there, so the question is: how does it get into the river?” asks Furtula.

The Drina, he recalls, is known as a river rich in fish. Many fishermen come to fish, and this fish is then consumed by the citizens. There is also an official city landfill nearby, where the extracted floating waste from the river has been disposed of for years. But the waste is often ignited, polluting the air with toxins.

“So it’s a vicious cycle affecting both humans and wildlife,” says Furtula.

Where is the Clean and Fast River?

The Drina River is formed by the confluence of the Montenegrin rivers Tara and Piva on Šćepan Polje, the current border between BiH and Montenegro. It has as much as 346 kilometers of flow through BiH, passing through Foča, Goražde and Višegrad, and several smaller and larger rivers flow into it.

Once a river full of rapids, carved canyons and gorges, it was irreversibly changed by the construction of hydroelectric power plants in Višegrad and Bajina Bašta. The Drina is considered one of the most beautiful rivers in the former Yugoslavia. In the past, it was known for its wildlife and the rafters that tamed its waves.

North of Višegrad, the longest canyon of the river Drina runs for 34 kilometers. Its cliffs rise over a thousand meters above sea level, which makes this canyon one of the deepest in the world. The green color of the river Drina and high, rocky cliffs – sometimes bare and sometimes thickly carpeted with trees – create the impression that you are entering a fairy-tale world, completely different from the one littered with waste near the Višegrad Hydroelectric Power Plant.

To date, three hydroelectric power plants have been built on the Drina, which have turned most of the river into a peaceful lake area. There are no rafts or rafters on the river today but thanks to the creation of artificial lakes, the Drina is accessible to tourist boats, along with organized river cruises. Višegrad itself is a city on two artificial lakes which were made by hydroelectric power plants on the Drina – Visegradsko, which is located upstream, and Perućac, a lake downstream of the city.

There is a Solution

The citizens of Višegrad, like others throughout BiH, are aware of the waste problem on the Drina. Džemila Agić, director of the Tuzla Center for Ecology and Energy, offers possible solutions that, she says, should be considered seriously.

“If we did an experiment with setting up a net of a certain diameter, we would see how much solid waste would accumulate on that net. This is to be expected, because according to available data, only about 60% of households in BiH have regular waste collection. The question is what happens to the waste produced by the other 40% of households. A small part of that waste is illegally disposed of in existing containers, but most of that waste is dumped on the banks of rivers, streams or in nature,” she says.

Džemila explains that the first necessary step is to introduce regular waste collection for all households and businesses in BiH.

“There is no one who does not create waste, nor is there a way for someone to dispose of it in a harmless way. The next step is the introduction of mandatory supervision and punitive measures. We do have laws according to which this is not permissible, which means that there is a lack of oversight,” adds Agić.

She also points out how important it is to behave responsibly towards the environment, because there are other living beings living there, to whom our harmful influence can cause direct consequences. The environment is a space that we share with others, a space in which our ancestors lived, but in which our descendants will also live, so it is important, Agić says, to treat it like the home in which we live.

“Environmental pollution has very harmful consequences for the environment and our health. Many studies have shown that, for example, polluted air is carcinogenic, that it has a detrimental effect on reproductive health that thousands of people die every year due to polluted air, that mortality due to the COVID-19 virus increases, etc. When you think about the importance of the environment, just remember how good you feel when you are in a city, village, by a river, or in a mountain where there is no pollution. How much better do you think we would have it if we lived in such an environment all the time?” she asks.

Although the problem of the ecological catastrophe has already affected the Drina River, the president of the Eco Center Association from Višegrad, Dejan Furtula, tells us that the citizens of that city are now tired of this problem. They have listened to repeated empty promises but are still confronted with this problem that has not gone away. The Eco Center Višegrad Association continues to pressure the institutions to finally deal with this problem, which, he says, gives him hope that a solution will be found in the near future.

“We are trying to introduce the whole world to this issue, and we have succeeded. Since the beginning of the year, over 20 TV crews from the entire region and Europe have come to Višegrad, so now everyone knows about this, and they are offering us their help. We hope that this will not happen again and that someone will finally bear responsibility,” concludes Furtula. 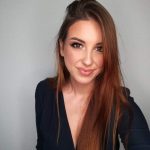 Amira is a trained Balkan Diskurs correspondent from Doboj East. She is a fourth year student of Bosnian language and literature at the Faculty of Philosophy, University of Tuzla. She is the author and proofreader of the Bosnian Thought portal. She is primarily interested in topics related to culture, politics, and history.