Non-governmental organizations are helping to educate and empower hardworking Roma women to take an active role in Bosnian society. The Otaharin Citizens Association for Promotion of Roma Education is a prime example. Otaharin’s mission is to increase the levels of education, social and economic integration, and inclusion of vulnerable marginalized groups, including Roma women. The association has given women like Sabira Hašimović a “normal” life.

Hašimović recalls that she and her three-year-old son used to sleep on the streets or in the cemetery where her husband was buried. She remembers working for a daily allowance, visiting and helping the elderly, and cleaning houses. She would ask to be compensated in food, because it was more valuable to her than money.

In the hope of getting a job and being able to afford a normal life, she even went to Germany. She worked there for a while, but as she says, she realized that it wasn’t the right choice because her son did not go to school there. She returned to Bijeljina and was employed in 2014, thanks to the Otaharin Association.

At first, Hašimović feared that because of her work, she wouldn’t be able to get her son to and from school. However, everything changed when Dragan Joković, the director of the Otaharin Association, told her that she was free to do whatever she needed to for her child. After that, Hašimović says she did her best to be successful in her work.

“Roma women can do a lot without formal education, but we aren’t given the opportunity,” Hašimović explains. Attending various educational programs, workshops, round tables, and conferences have helped her a great deal, and through her dedication and hard work, she is now the president of the Roma Women’s Association.

The Association organizes various educational programs, round tables, grassroots activism, and important events. Hašimović says that these activities are aimed at raising awareness and educating Roma women, as well as preserving and promoting Roma tradition, culture and language, which are all parts of their identity.

“Now I am a proud woman who has helped many other women and involved many of them in various activities. My goal is to empower many more women. And I am most proud of my son, who will soon graduate from high school. I have always wanted my child to be educated, which is about to come true,” Hašimović added.

She points out that Roma women deserve a better life and that is why it is always necessary to empower them. This includes promoting the importance of education, inclusion in society, and employment.

“Otaharin helped me as a Roma woman who was part of the community. We all know how Roma women live, but living like all other people means a lot to me,” said Hašimović. She encourages all Roma women to be strong because after every fall they can only get back up, stronger than before.

“Fight for your rights, because human rights are Roma rights,” Hašimović pointed out.

To promote the economic empowerment of Roma women, the Otaharin Citizens’ Association for Promotion of Roma Education founded a social enterprise five years ago. In 2018, it consisted of only one greenhouse, but today “has almost an entire area full of greenhouses.”

Bojana Jovanović, Program Director of Otaharin, said that Roma men and women usually stick only to their own communities and that dropping out of primary education due to lack of knowledge of the language is a major problem.

Through communication with Roma parents, Jovanović said that they are trying to return these children to schools, which is very difficult. In their general work with young people, she explained that they emphasize the inclusion of Roma men and women, so that they have opportunities to make new friends and not be afraid of stepping outside the Roma community.

According to the available data, about 155 Roma children from the Bijeljina area recieved some level of education from primary school to college. Otaharin helps children by providing them with numerous educational opportunities that give them skills that will be useful in their future careers. In addition to education, the Association provides free school supplies and textbooks for children.

The Roma community in Bijeljina is one of the largest Roma communities in BiH. Since 2005, Otaharin has been working to provide support and proper conditions for the education of Roma children, as well as to promote an inclusive approach to the integration of Roma men and women in BiH communities.

This text was produced as part of the Social Media Caravan project, organized by LIR CD, Banja Luka and Arbeiter-Samariter-Bund Deutschland, under the auspices of the European Union. 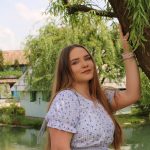 Dženisa Joldić is a trained Balkan Diskurs correspondent from Sarajevo. She was born on June 11, 1999. At the age of 12, she published her first collection of poems, "Sunčani zagrljaj". She is currently a third-year student at the Faculty of Political Sciences in Sarajevo, Department of Communication and Journalism. She likes to express herself creatively through writing and photography.

Balkan Diskurs and the Post-Conflict Research Center (PCRC) are proud to announce the start of a new research project entitled ‘’Real Voice of Journalism.’’
October 20th, 2017