Climate change is real, but the Bosnian government and society have not sufficiently developed mechanisms to cope with it, such as “green” reforms that improve environmental awareness. However, there are young people who are engaged in activism. One of them is Emir Delić, a 28-year-old from Bihać, who shared his ideas at the Youth for Climate Conference in New York.

“Some believe that climate change is a myth. Indications of its reality are the drought in the Southern parts of Spain and Portugal, as well as in Africa and Capetown, among other examples. This requires efficient work with less talk. That’s not to diminish the value of seminars and conferences, but concrete action needs to be taken,” said Delić.

He believes that one of the biggest global problems is the large number of cars and the low levels of awareness about using public transport. In addition, only a few people use electric scooters or bicycles, unlike in Amsterdam, for example, where there are more bicycles than people.

Delić is an environmental worker and activist with a degree in forestry from the Faculty of Biotechnology in Bihać. He’s currently enrolled in a double degree master’s program at colleges in Banja Luka and Sarajevo in the fields of forest ecology and ecological water monitoring.

Delić participated in the Youth for Climate Conference which was held on the occasion of the 77th session of the United Nations. It brought together more than 150 participants from more than 90 countries, and he represented young people from Bosnia and Herzegovina. He explains that there were many young climate leaders with vision and goals present. Some were there on behalf of non-governmental organizations, while other innovators represented their small businesses specializing in properly sorting waste.

“I had the opportunity to talk with leading experts from UN agencies, including the chief administrator of UNDP, with whom I exchanged opinions and ideas, as well as received advice on how to take action for one’s own company, system, and beliefs.” said Delić.

One of the most important segments of the conference was the presentation of the activities that are underway in our country, such as the relationship between society and government towards environmental protection and climate change, and whether our young people are active and participate in advocacy processes.

Delić believes that we undervalue the potential of our natural resources. The rich network of rivers and endless greenery of the forests are under attack due to the lack of collective awareness about environmental protection.

“Dubai uses water, and where do they get it from? They spend millions and millions on expensive machines with which they perform desalination. They spend a lot of money to turn seawater into drinkable water. We should ask ourselves what our relationship is with our rivers,” says Delić.

He added the impoverished and unemployed are unable to warm themselves during the winter for financial reasons and are forced to cut down forests.

“More than 62 percent of the country’s territory is covered by forests. In that respect, we are the first in the Balkans, but we also share the first place in numerous illegal activities, such as cutting down, burning, and destroying forests to turn them into agricultural and construction land,” Delić explained.

Apart from forests, the biggest threat to rivers is the construction of hydropower plants that change their course, thereby destroying plant and animal life. Delić points out that we are poorly guarding resources that we have, which some countries are already panicking about losing.

To change that, he believes that enforcement and compliance with legal regulations is key. “In Bosnia and Herzegovina, inspections do their job poorly. This is the corrupt system in which we live. It’s noticeable in what’s happening on the banks of the Una River. One of the most beautiful rivers in Europe is being filled with concrete. Everyone knows, if I’m not mistaken, that you aren’t allowed to build things within ten meters of the Una River. Also, numerous hotels and restaurants are connected to the Una River by a sewage system without the special water purification filters required by law. It’s a public secret, but nothing is being done about it,” said Delić.

Delić was involved in various projects at the Una National Park. Currently, he holds trainings on biodiversity at the Center for Sustainable Development, where he teaches hundreds of participants about proper waste sorting, urban greening, tree planting, and so on. Speaking about the protection of the one and only Una River, he also points out the Unski smaragdi association, through which, as he says, “generations of young people have been raised.”

“Our task even now is to work with the youngest, to teach them about ecology through the non-governmental sector. In our country, the problem is that education about climate change and environmental protection is not included in the curricula or not adequately included. Activists in this field are really active. We recently planted over 250 trees as well as cleaned suburban settlements, the banks of the Una, and medieval fortresses. We also promoted recycling and the like,” said Delić.

He adds that in non-governmental organizations, you can find sincere leaders who care about nature.

“In my opinion, local NGOs can still be the turning point to ensure that what we have continues to survive and stand on its own feet. Their activities bring about changes, and they are staffed by teams of people who are honest and heartfelt leaders and activists. They are advocates of change, protectors of nature who do this work because they love it, because they want things to change so that what we have is preserved,” said Delić.

However, young people do not yet see all the benefits and opportunities offered by the non-governmental sector. The young activist explains that people have survived from the beginning of mankind until today because they worked together. As individuals, there is only so much we can do to change things. In terms of the environment, he notes that individuals can throw cigarette butts in the bin, carry tote bags, and also teach children positive ecological approaches in order to change consciousness across generations.

“We have to make an effort and to want to do better, not be selfish and say, ‘I won’t be there when these things happen.’ We need to preserve what we inherited from previous generations,” explained Delić.

Delić believes that if we followed the 17 goals of sustainable development, we would be able to preserve nature and the environment while leading normal lives, without changing our lifestyle habits drastically. Our relationship to nature, he concluded, should be the same as our relationship to the house where we live, because we don’t throw trash next to the bed. 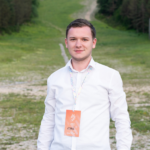 Kenan Kečanović is a trained Balkan Diskurs correspondent from Bihać. He is a student at the Faculty of Law, University of Bihać. He has been a youth activist and volunteer for many years. His youth oriented activities, he manages through the media and his own show KontRaš?!. He is the winner of the "Japodski konjanik" youth award for his activism at the local level.

Rohingya: Faces of a Humanitarian Crisis

Rohingya Muslims are one of many minority groups in Myanmar. After stripping the Rohingya of their citizenship, the predominantly Buddhist country purged the Muslim minority from Myanmar by conducting military raids, killing thousands of Rohingya, and forcing many more to flee.
May 28th, 2019