Sarajevo. Its name has been written into the new pages of the world’s history of warfare. During the 1990s, stories of its tragedy were featured on the front pages of newspapers across the globe.

On its streets, in the asphalt, the petals are filled, red in color, and they came to be called the happy-melancholic-romantic Sarajevo Roses. They serve as a unique monument to a city that survived one of the longest battles in the history of modern warfare. They serve as a memorial to the Siege of Sarajevo where many cultural and religious institutions were damaged and where civilians were at the forefront of the suffering: 50,000 were injured, 10,650 died, of whom 1,601 were children.

Sarajevo was under the constant siege of Serbian forces for 1,425 days. 470,000 grenades hit the city during that period – approximately 329 a day. A record was hit on 22 July 1993 when 3,777 grenades were thrown in one day. Each grenade that exploded left a trace that looks like a flower. When the war ended, “petals” with fatal craters were painted red in order to honor all those who died during the Siege of Sarajevo. Each rose is a place where at least three people died. Some people recall the siege and manage to clean the places in April every year. Sarajevo people bring flowers on their way to somewhere, and when passing they tell their children about what happened there and what those roses stand for. The others wonder what do those scars represent and why the government doesn’t repair and care for them.

A group of activists from Sarajevo handed the text written by Jasminko Halilović, “The Disappearance of the Sarajevo Roses” to the local government. The government promised that they would take care of it. But they didn’t do anything. The activists didn’t give up: they managed to do what they had previously wanted by participating at the 14th anniversary of European and Mediterranean young artists in Skoplje. There, they presented “7 Articles – 7 Sarajevo Roses” as well as at the Festival of International Arts in San Marino. Halilović, the head of Urban, was born in Sarajevo. He graduated from the school of economics and then took his masters in financial management. Apart from running the Urban association, he’s an author of many other projects like Sarajevo Party, which was the first blog published in a form of a book; he was the co-author of the memoir, Sarajevo – my town, the place to meet. He started his interactive web project four years ago which has later become very famous in the region and which made the local government and the media give support. The final outcome was the publishing of The childhood in war, at the beginning of 2013. But what is it actually about? Jasminko asked the people of his age a question on his web page, “What does the childhood in war mean for you?”. The news spread around very quickly. Jasminko’s project was supported: 1,500 people from 38 countries around the world wanted to share their experience. They wanted to talk about growing up during the war, their letters, drawings, diaries… and their stories ended up on 328 pages of Jasminko’s amazing book. All my effort on this book I want to dedicate to Mirela Pločić, my first crush, who, unfortunately, died in 1994. Comparing to some other published war diaries, I wanted to write about the collective experience at the wartime. This project is there for all generations who experienced childhood from 1992 to 1995.

“Personally, I’m not a fan of monuments made of modern materials that totally change the context of the place where they’re built. That’s why I think that Sarajevo Roses are the most representative monument that reminds us of the siege of Sarajevo and all war victims,” said Jasminko Halilović, the head of Urban association that promotes culture in the capital of Bosnia and Hercegovina.

The romantic context in the monument name – roses, pictures the Sarajevo spirit the best, as well as the strength to express the worst things in a metaphoric way. That’s why people love the unique monument so much and that’s why they’re so attached to it. It’s important to stop its destroying because of people’s attachment. Nothing was done concerning that problem so far, there were just a few tries of some individuals and organizations.

All the above mentioned is proof that an individual or a small group can help preserve the memory of these lost years and lives as do the Sarajevo Roses. 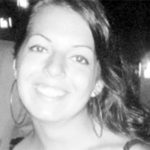 Jelena Lukic is a former intern of the Post-Conflict Research Center in Sarajevo. Jelena holds a Bachelor’s degree in Marketing and Public Relations from Belgrade University.