In this country people go by many names: Bosnians, Serbs, Croats, Bosniaks, Catholics, Orthodox, Muslims. This nation speaks different languages: Bosnian, Croatian, Serbian, yet they all speak the same language and everyone understands everyone else. This nation writes with different scripts, yet they all write of equality, justice, peace and freedom in the same way.

There exists a country in the corner of the universe, in the shape of a heart. Such a big heart, but is there still humanity within it? For centuries the Sava, Una, Drina and Vrbas rivers have had a strange hatred flowing through them. As long as this country can remember it has known war, and it is still recovering from the last one. However, nothing in this country is black. Everything is colorful and different: traditions, folklore, prayers, all breathing together under the same veil.

Citizens of this beautiful Bosnia-Herzegovina, which is everyone’s and ours, are proud of its diversity, but their voices are lost next to voices of those with empty heads and full mouths. Yet, they are there. They exist and act.

Alma Mehičić, a young and unemployed traffic engineer from Doboj (Republika Srpska), says stagnation is not a strong enough word for everything that is happening. She thinks that the transition process reflected badly on all Bosnians and that people can still feel the consequences. However, it is all individual and ultimately depends on the development of awareness among the youth. “People live in the past and transmit their negative energy to their children,” says Alma, who firmly believes that the key to everything lies in education, gaining knowledge and learning about other people’s cultures so that one may accept one’s own. “This is a very rich and diverse country,” Alma states. But the question is whether this is clear to everyone.

Marko Matolić, a freelance artist and History student at the Faculty of Philosophy in Tuzla, says: “From the hypnotic tales of brotherhood and unity we were thrown into the jaws of war. Then, scared to the outer limits in which sanity barely survives, we found ourselves in a completely foreign world. In our history, the people of Bosnia never lived in a genuinely democratic system. It is thus not surprising that the society does not function very well in such a system. Most do not know how to behave in such a system. Only a minority understands how such a machine works and have decided to abuse it.” Marko believes that the Bosnian man knows nothing because knowledge is nowhere to be gained. Why is this so? In his opinion, universities are full of professors steeped in crime, and are abound with money lovers, plagiarism and doctorates set on the systematic destruction of its prospective students. On the other hand, below-average students force their way through the elementary and high school systems. The middle class, or the so-called bourgeoisie, who are potential carriers of intelligence are pushed into the lower class, sacrificing their essence while being overburdened with the struggle for existence.

Marko thinks that in Bosnia true social values like art and economy have been destroyed and that only religion is advanced. Religion that is, in his opinion, deeply embroiled in politics. Therefore, the key decisions are made by “irrational brains”. However, there are a number of people who want change, but are too cowardly to apply the necessary measures.

Marko offers two possible solutions: introducing a totalitarian regime or sending a request to the European Union to have them educate an expert government for a minimum of 30 years. Aware that his ideas may sound crazy, he still backs them up because traveling the normal road to a comfortable life has become impossible. Research conducted by non-governmental organizations reveals that more than 80% of youth want to leave Bosnia.

Admir Skula, a mechanical engineer from Doboj and a “Bosniak” raised in Zagreb, recently did just that. He currently lives in Mannheim and says that he describes Bosnia to his German colleagues as “A place where a Catholic Church, an Orthodox Church and a mosque sit side by side. It is a place of Austro-Hungarian buildings and Ottoman city centers.” Admir says his colleagues would listen in awe. Asked why he left Bosnia when he has such nice things to say about it, he says he left not because of material, but, rather, human interests. I wondered: Which human interests convinced him to leave? Nationalism? Extremism? A lack of quality education? “I celebrate both Christmas and Bajram (Eid), but religion is really just opium for the masses. Every holy book speaks of universal values, but the problem is the ‘mongers’; the interpreters and semi-literate advocates of hatred.” Skula considers himself part of the young generation that has successfully resisted such influences, but the problem, he says, is that the legacy of hate is being passed down from the older generations to the younger ones.

As if realizing the solution to our way out of this situation, Admir somewhat abruptly quotes a line from Go West, a movie all Bosnians are familiar with: “Kill all the Muslims, Croats and Serbs in this country, and then repopulate it with normal people who know how to enjoy this beauty.” At first, we may consider such an attitude off-putting, but, if interpreted correctly, we can understand the irony and take a lesson from it.

Adin Mešić, a student at the Faculty of Medicine in Tuzla, says that in order to get our own piece of land we sacrificed everything from the economy to social security. He believes that as long as they celebrate something that happened 4, 5 or 6 centuries ago, from the Battle of Kosovo to the Bosnian pashadom, Balkan nations are tribes who refuse to be a part of a civilized and modern Europe. “There is segregation everywhere. Some people are open about it, while others keep it hidden. It has been 20 years since the latest war in this country ended, and we are still divided in the same way. I am not a part of the masses. I do not identify with any one national group, as this affiliation is irrelevant to me. I consider myself a citizen of Bosnia.” When I asked him, what the solution is, Adin simply replied: “Time.”

Delila Bajrić is a fourth year student at the Medical High School in Tuzla as well as an activist for many NGOs. She also believes that young people are being poisoned by a past that is trying to impose some “old” values instead of cultivating new values that nurture respect for the beauty of diversity. “Young people today have difficulty expressing themselves and their individuality, because instead of receiving respect for their opinions and attitudes, they are instead exploited for the purpose of certain ideologies.” These considerations suggest that young people who are aware of their situation and who have developed critical thinking skills that allow them to avert what is imposed upon them in this “contaminated” environment, in fact, have very similar viewpoints.

Delila says that, unlike some other places, the situation in her town is much better and there are no signs of interethnic hatred. “The reconciliation process in our country is not the boogeyman everyone makes it out to be. All that is necessary is to lower the tensions and allow young people to think for themselves without being limited by the conservative influences of others.”

Wipe the stamps off your foreheads, because you are not a part of mindless masses! The wounds have long since been healed, and the scars can be easily covered. But why should we cover them? They are part of us and what we once were. They are there to make us stronger. Raise your voice! You can be everything you want to be if you want it hard enough and are brave enough. Be the change! Be the Bosnia-Herzegovina that it should be and truly is! 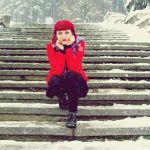 Elma Karahodžić is a Balkan Diskurs trained correspondent from Jelah, Bosnia-Herzegovina. She is currently pursuing her Masters degree in Bosnian Language and Literature at the University of Tuzla. Through her work she combines her two passions – writing and activism."

Made by Nature or by Man? Bosnia-Herzegovina’s Organic Farming Practices

Not so long ago, asking about the eco-friendliness of our food was irrelevant, as this was the only kind of food that existed. Nowadays, becoming more informed about which foods are organic and which are not can have important health implications for Bosnia’s citizens.
July 25th, 2016