Subjugation, inequality, revolution, and protests have marked and continue to mark the world history of activism. For thousands of years, people have fought against oppression and subjugation – whether by force or peace. And women have always been part of that fight.

Despite the fact that women in Bosnia and Herzegovina (BiH) were given the right to vote as early as 1945, the struggle for gender equality remains active even today. Many believe that BiH is a patriarchal state in which women and men are not equal, but activists in BiH try to prove the opposite through their day to day work.

“I tend to say that I started my activism from an early age, when I was still in primary school. We got to read the play ‘Hasanaginica,’ and I said that it was the worst piece of literature we should be proud of. I was given an F and was told that I would be able to correct my grade once I changed my mind. At that time, I saw ‘Hasanaginica’ as oppressing women,” Vildana Džekman, an activist at the CURE Foundation, told Balkan Diskurs.

She tells the story of how she was a rebellious girl from a young age, played football, wore men’s clothing and never adapted to social norms.

“Being as such, nobody accepted me as a girl. That’s when my activism began. Back then, I did not know it was my resistance, and my identification with feminism, that would come up later,” she says.

Vildana is one of those women who experience what it is like to be an activist in Bosnian society firsthand, including how much effort is needed to achieve results. After graduating from law school, she began volunteering at the CURE Foundation. There she encountered for the first time the idea of feminism and support for lesbian, bisexual, and transgender women.

This is how love, acceptance, feminism, rebellion and resistance towards patriarchy developed in her, which, as she says, has been going strong for nine years since she came to the CURE Foundation. She believes it will remain part of her life for good.

“It is very difficult to be a woman activist in BiH society. It is a sphere difficult to act in, especially when you are a lawyer and a feminist and a fighter for LGBT rights. It is a constant struggle with oneself, especially finding support for what you are doing. And that struggle is tiring and exhausting. Instead of focusing on the results, you have to enlighten others on feminism, the liberation of women, the struggle for equality and a stronger civic economy. So, you always have to start from the very beginning, which is very tiring. And you are always on the fence whether to share the results with others,” Vildana points out.

Berina Bukva is a youth representative, activist and expert who has been working in the non-governmental sector for 10 years. She mostly deals with youth and gender issues. She says that being a woman, and at the same time a young person in Bosnian society, is often challenging and carries a double burden of obligation and responsibility.

“Sometimes it all starts and ends under that pretext, ‘it doesn’t matter now, we have burning issues to deal with, there are more essential things than your right or request.’ It is challenging to either be an educated or uneducated young woman, while being very loud in your beliefs, demanding your right to vote for the processes relevant [to you]. I have been approached under the assumption of always being on the wrong side, that I have grappled with ‘too big too handle’ things, and that this is not appropriate behavior for girls. Thinking about what that means, this struggle has always been of dual nature – I am young and a woman. Being a woman activist in BiH is difficult as you can allow yourself not to know, not to be informed and not to participate in the processes that concern you,” Berina says.

Traditionally, men have always been seen as strong, while women have been seen as weak. Men are perceived as superior, while women are seen as their subordinates. This is illustrated by the fact that masculine traits are seen as strong and competitive, and such traits are socially desirable. Female traits, on the other hand, are those of passivity, obedience and emotions, and those are not socially desirable traits. It is therefore very obvious that we live in a society that is not only sexist, but discriminatory in general. (Stamarski, Son Hing, 2015)

“Today, modesty is rooted in women’s character, their voices are constantly silenced, they are told to be modest. And this is not right. Why should a woman not brag, if she has done something significant for the community? It is not boasting, it is valuing your actions. That is one part of the issue, and an additional drawback is that women know very little about their rights, they read very little about it. Changes can only begin when women start learning and when they start to unite in the exchange of information and knowledge, but also in the exchange of support,” explains Vildana.

According to data from the Agency for Statistics in BiH, for the academic year 2017-18 there was a higher percentage of women, compared to men, who completed their academic or vocational studies – in other words, of the total number of graduate students, 58% were women.

In addition to that, women’s participation in politics shows that women in BiH have an unfavorable position compared to men. Women are ministers in only two ministries at the national level – the BiH Ministry of Foreign Affairs and the BiH Ministry of Civil Affairs – while there are no women among the deputy ministers.

“It is no good to talk about politics and women, while avoiding talking about ‘male’ politicking, which in the end creates a male political empire. And, of course, there are those great and capable female politicians, but no media space is reserved for them – because the truth is – we already (wrongly, but sometimes correctly) assume that they only follow in ‘the big boss’ footsteps. So, the responsibility is theirs, but also ours – should we follow others into the ‘better future’ or should we lead towards it? This aspect can only be improved by conscious learning and speaking,” adds Berina.

From the reign of Katherine the Great to present day, many things have changed – various industrial and technological revolutions have contributed to that change. However, one thing has remained the same: women continue to fight for their rights.

Women’s activism has shed light on ongoing debates around the world and helped to address the issues women face and end injustices against them. Despite inequality and segregation across the globe, women have managed time and again to express their feelings, questions and desires. Women’s activism has spread around the world, making it a sign of unity, so everyone may come to believe that both men and women deserve equality in opportunities, treatment, and social rights. 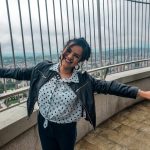 Amra is a trained Balkan Diskurs youth correspondent from Sarajevo. She is currently working as a financial officer at the Center for the Promotion of Civil Society, where she volunteered for a year as an associate for logistical support on the IMEP project (Independent Media Empowerment Program). She is studying at the Faculty of Economics in Sarajevo, where she completed her undergraduate, and is now completing her graduate studies. But her love of writing, which she had since elementary and high school, has remained to this day. She believes that activism, which includes various seminars, trainings, and volunteer engagements, is one of the basic ways in which it is possible to contribute to building peace and a better future.

The Bosnian city of Bijeljina, nestled in the northeast, takes its name from the word “bijela” meaning “white”. Despite an absence of visual evidence as to why the city has been given this name, it nonetheless seems fitting. This is not due to an abundance of white buildings, of which there are few, but because the city possesses a muted, uniform complexion, lacking in pigmentation and expression.
September 26th, 2019

Once they reach 18 and leave the orphanages in which they grew up, children without parental care as well as those with developmental difficulties are left on their own and, in the process, they face rejection by their communities.
June 20th, 2022