Ramiza, Đema and Fikreta could have been women from these stories. They still speak of life before the War and Genocide, when their houses and hearts were full, just like this. But out of the blue, the war trumpets sounded and they, along with the other mothers of Srebrenica, were left with nothing but memories of once joy-filled lives.

Ramiza does not remember days and dates anymore. She wanders aimlessly in the labyrinthine of her mind, looking for once-known acquaintances. She thinks about what would have happened if her son had gone to America. At least he could come back to visit. Đema shares the same wish. For years she was waiting to hug and kiss her two boys, but the truth – that they were never coming home – tore her to pieces. If you observe Đema carefully you can see the shadows of love in her eyes, love for the boys for which she still yearns. Fikreta quietly endures her pain, thinking often of her sister and words left unsaid between them. She finds salvation from the overwhelming pain in her faith.

Ajša Bektić, Begajeta Nukić, Bida Smajlović, Fikreta Bečić, Hadžira Suljić, Hatidža Habibović, Kada Đema Pašić, Magbula Divović, Ramiza Begić and Šehida Abdurahmanović share the same destiny. A destiny which screams in silence. A destiny which embraces memories. A destiny which pervades the air. Srebrenica seems to be stuck in time, with its white fields kissing green grass. The cemetery looms above it – an unavoidable part of the history of the city, a dignified memorial to lives taken mercilessly. But another memorial to these lost souls has finally found its way to Srebrenica. Today the town is home to 8,372 fildžani cups. These mothers donated 93 of them.

The cups are part of the installation of a nomadic monument to the Srebrenica Genocide called ŠTO TE NEMA. Artist Aida Šehović started the project in 2006. Until 2020, the monument moved from city to city each year. Annually on 11 July, Aida and a team of volunteers lay out a cup for each victim and fill it with traditional Bosnian coffee. The cups represent the souls of those who were stripped of the opportunity to drink coffee with their families ever again. The monument was always set up in busy city centers, with the idea that passersby could come and engage with the monument if they wished, either by joining in discussions or by helping to pour the coffee themselves. The monument has been all over Europe and the United States and has even made a trip to the United Nations Headquarters.

In 2020, on the occasion of the 25th anniversary of the Genocide and 15th anniversary of the monument, ŠTO TE NEMA moved permanently to Srebrenica, where it will now be exhibited at the Srebrenica-Potočari Memorial Center in its final form. The Post-Conflict Research Center (PCRC) partnered with the Memorial Center to gather fildžani cups for the monument from a range of notable individuals, including from the mothers themselves. In the lead up to the commemoration on 11 July 2020, PCRC worked closely with the mothers to gather their stories, in an effort to protect the memories that the cups represent. Throughout July, PCRC ran a social media campaign that highlighted those who had donated to ŠTO TE NEMA. The campaign featured local and international politicians, representatives from various organizations all around the world, artists, other genocide survivors and many others. The support for the monument, both locally and internationally, was overwhelming.

In the end, the monument’s move to Srebrenica was fitting. The cups, representing the souls of each man and boy killed at Srebrenica, were finally coming home. The desire, or rather the need, to return home, to the very site of the killings, is a feeling that the mothers of Srebrenica understand well. Many women returned to Srebrenica after the War and Genocide, believing it was the only place that they could protect the precious memories of their loved ones and their life together before the war. As Hadžira, who lost six family members in the Genocide and now lives in the ruins of her parents’ house in Srebrenica, says, “As long as I live, the memories of these people and these events will live on. Of these spaces that we selfishly guard.”

Bida, who lost three family members, was one of the first returnees to Srebrenica, and lived there without electrical power for at least a year. She agrees that she couldn’t live anywhere else, and says that without the support of her mother, sister and other women in Srebrenica, she could not have lived with the grief.

Many women first returned to Srebrenica after the War and Genocide, while waiting to be reunited with their families. The mothers say they are still waiting, unable to accept a loss so great. Hatidža, who lost four of her family members, explains, “I don’t know, child, whether these sorrows will ever pass and whether these tears will ever dry. Whether we will ever stop waiting for them to come back to us…I don’t know…”

For many the wait is not just psychological. Countless women in Srebrenica are still waiting for the remains of their loved ones to be found and have been searching for them for decades. Through tears, Ajša, who lost at least fifteen family members, says that all she wants is to bury her son before she dies. She describes how identifying his remains this past March shook her to her core.

“If only there were people, we have cups,” says Magbula, who lost over twelve relatives in the Genocide. These women’s’ stories should have been written differently. But they have no happy ending. These stories are more tragic than Shakespeare’s tragedies, and they carry more pain and sorrow than Hamlet’s destiny. The mothers of Srebrenica will never get their loved ones back. Not ever. At least, not in this world. Except on every 11 July when everything comes back to life: their tears and laughter, their dreams and first steps, their embraces and kisses. But the mothers are not filled with hatred, only with hope that they will all meet again.

All these mothers have left are the memories of their family members and of life before the Genocide. It is these memories to which ŠTO TE NEMA stands as a testament. This is what Begajeta, who lost eight family members, was thinking when she found several fildžani in the ruins of her house in Srebrenica, and why she later chose to donate them to ŠTO TE NEMA. Many other mothers have joined her in donating to the monument to preserve the memory of their loved ones.

ŠTO TE NEMA’s return to Srebrenica represents a commitment to safeguarding these memories for future generations. Šehida, who lost seven family members in the Genocide, believes that those left in Srebrenica must help lay the foundation for a peaceful future in Bosnia-Herzegovina. Despite everything, she says it is a privilege to look outside her window every day and see the Potočari cemetery.

Using art as a bridge to peace, ŠTO TE NEMA has united different peoples and brought young people closer to one another, as it is they who are the bearers of the future and protectors of the truth. With support from PCRC and the Srebrenica Memorial Center, the monument can now continue to serve as a reminder of this commitment for future generations. 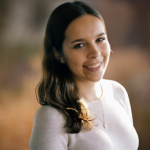 Alexandra is completed an MA program at Columbia University’s Harriman Institute, studying Russian, Eurasian, and Eastern European Studies with a special focus on the Western Balkans and the Bosnian/Croatian/Serbian language. She also holds a BA in Political Science and Slavic Studies from Columbia College. Her current research interests include government-NGO relations, though much of her professional experience is in the humanitarian space.

We need greater responsibility for a more inclusive society

People with disabilities face many difficulties on a daily basis, and the system often neglects them. Despite the many challenges she faces as a person with hearing impairment, Alma Mujanović has managed to take part in social and professional life, through a hard work and great effort. She says that it is extremely important to work on ourselves, but that our country must take greater responsibility in order to build a more inclusive society.
May 4th, 2022