Elvir Hambašić has turned his interest in wood carving and woodcraft into a unique business, working alongside his children and his wife, Sanida. This family from Donji Ulišnjak, near Maglaj, is one of the few who are committed to preserving culture and tradition by producing traditional Bosnian furniture.

Elvir was the only one of his six brothers to dedicate himself to this craft. Dedication, persistent effort, and practice have enabled him to make a living from this job, alongside his wife and three children. Due to the quality of their unique handicrafts, they have a large number of customers abroad.

It has been 15 years since Elvir started this work. Initially, his shop was registered under “domestic handicraft,” but later, Hambašić decided to register it as a traditional and old craft – namely, woodcarving. Since woodcarving is under UNESCO protection, a Commission had to visit to determine if the work adhered to certain established criteria, such as carving patterns without using any templates and aids. After the conditions were met, the shop was registered. Today, it bears the understated name of “Souvenir.”

His son, Amar, and daughter, Irma, help him selflessly and diligently. In his shop, you can find all manner of woodworking machines, from gluing presses, planers, and combined cutting machines to devices for spinning and processing edges and curves. He has also recently added a saw blade to his collection. Elvir tells us that he wants his children to have a secure job ready for them when they finish high school.

“Due to the hazards, I still can’t let my kids work on the machines. I do that myself. Amar works with a chisel, and Irma is very attached to the craft. I draw everything and give it to them, and they already know which part of the job is done with which tool. I distribute the work between them equally, and I pay for the finished products. By doing this, I motivate them even more,” he says.

The Hambašić family can take orders for a complete Bosnian room, including a sofa, a table, a larger or smaller traditional table known as a peškun, a chest of drawers, an armchair, and a shelf. Of course, each of these pieces is also available individually. In addition, they sell wooden bowls, trays, and smaller objects, which are entirely made by his daughter, Irma. They use walnut wood, cherry wood, and steamed and dried beech for production. Since everything is handmade, each piece takes a lot of time to produce.

“We have small peškuns that cost 100 KM, tables from 350 to 1,500 KM, and traditional sofas, which are up to 2,500 KM. My biggest market is in Sarajevo, but we have foreign buyers too. I must mention as well that my customers are of all religions and national groups. It doesn’t matter who you are or what you are. It is about appreciation for this kind of furniture and wanting to invest money in it,” says Elvir.

The production process begins with choosing a wooden board according to which piece of furniture they will be making. The selected board is transferred to a planer machine and then to cutting and gluing machines. After that, all the parts must be cut out. For example, the board for one table consists of 20 different parts. Elvir outlines them, then Amar and Irma pound, then clean. The gluing process is repeated, and the finish involves fine sanding, painting, and varnishing.

“This job requires effort. It’s the same with any other: if you do it without will and love, then it won’t work. As long as you love it, you will always strive to improve. I like the fact that the workshop is right next to my house, so I can work and rest whenever I want,” he points out.

He also says the work can be very intense – it takes up to 25 days to make one table. Bowls, trays, and boxes take much less time and sell out very quickly.

Elvir’s working hours start at 8 am, and he will sometimes stay in the workshop until 11 pm to finish pieces on time. It is a unique crafting process, and no two pieces will have the same pattern.

Sales were significantly reduced due to the pandemic, but everything is slowly returning to normal. Although this is a family business, Elvir’s next plan is to hire a carpenter to work with the machines. However, the search so far has been unsuccessful. He continues to rely on the help of his children and wife. This team represents the guardians of the old Bosnian tradition.

“I think that this craft will fade away with time and that the demand for the furniture will significantly reduce. However, there is always the possibility that everything will be the other way around, and I would sincerely like that!” says Elvir Hambašić. 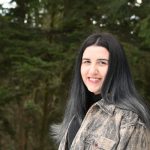 Amina is a trained Balkan Diskurs correspondent from Sanski Most. She currently lives in Kozarac and attends medical high school in Prijedor. Amina completed the youth journalism training and competition organized by eTrafika, and as the youngest member, won 2nd place. After that, she started working for eTrafika, writing texts in the section "It can be different."

From Prosecution to Pride: Goran Miletić on the Evolution of LGBT Activism in the Western Balkans

Goran Miletić, Civil Rights Defenders’ Program Director for the Western Balkans, has been involved in LGBT and wider human rights activism since the early 1990s. Miletić sat down with Balkan Diskurs to discuss how the nature of LGBT activism in the Western Balkans has evolved over the course of his career, how he sees the current state of affairs and what he sees for the future of LGBT activism in the region.
June 12th, 2017

It’s no secret that residents of Bosnia and Herzegovina have to use bribes in order to receive certain medical services, and it’s been that way for years. The medical profession is supposed to be one of the most humane, but it is being undermined by bribery and malfeasance.
October 16th, 2017