The exhibition “Scarves of Remembrance” was opened at the Srebrenica Memorial Center on July 9th, as part of the commemoration of the 27th anniversary of the genocide in Srebrenica. Featuring photographs of the mothers of Srebrenica, it honors their years-long fight for justice and truth, their perseverance in the search for the remains of their loved ones to give them a dignified burial, and their efforts to “preserve life” in the years after the genocide in Srebrenica. “Scarves of Remembrance” is accompanied by a photobook about the lives of the mothers of Srebrenica.

The scarves are a symbol of Bosnian women, who sometimes wear them during prayer, when entering cemeteries, or simply as fashion accessories. In displaying these scarves, the exhibition and photobook honor these women and their role in preserving the memory of the genocide.

Munira Subašić, President of the Movement of Mothers of the Srebrenica and Žepa Enclaves, says that the aim of the exhibition is to unite women from all over the world. “We wanted to find a way to connect all mothers, all women, first from Srebrenica and then also globally, because we are very much aware of the role that women have in our society – the role that they had to take on during the war, but also during peace,” explained Subašić.

In the words of the Director of the Memorial Center, Emir Suljagić, “if you want to learn something about these women, don’t look at their face, but at their hands, because we grew up on those hands, and many of us don’t have access to those hands now.”

“Many of those hands will never caress their loved ones again,” adds Suljagić. He says that the hands of the mothers of Srebrenica tell stories we need to hear, describing them as strong hands, but at the same time, the tenderest in the world.

Velma Šarić, Founder and President of the Post-Conflict Research Center, also emphasized the symbolism of the hands of the mothers of Srebrenica, which convey their strength as well as the burdens they have borne.

“The scarves and hands in the photos show our mothers’ burden and pain, but also their strength,” said Šarić.

In July 1995, more than 8,000 Muslim men and boys were killed in and around Srebrenica by members of the Bosnian Serb army under the command of General Ratko Mladić together with police forces of the Republika Srpska under the political leadership of Radovan Karadžić. The bodies of the victims were thrown into mass graves located in the area surrounding Srebrenica, Bratunac, and Zvornik. Following the public discovery of the burial sites, the remains of the victims were exhumed and transported to secondary and even tertiary mass graves in an attempt to hide the evidence of the crimes.

After the war, the women from the area of Srebrenica, who had been forcibly deported by bus in July 1995, led the fight for justice and truth. Over the years, the women of Srebrenica have also pioneered the search for and identification of their sons, husbands, and brothers. The focus of this year’s commemoration of the genocide was on these women, the mothers of Srebrenica, honoring and acknowledging the crucial role that they played both during and after the war.

During the opening ceremony, the President of the Organizing Committee for Commemorating the 27th Anniversary of the Genocide, Hamdija Fejzić, recalled, “The mothers took on the biggest burden. After the war, they led the fight for truth and justice, testifying as witnesses at the ICTY and facing the perpetrators. Many of them did not live to find even a bone of their children.”

An integral part of the exhibition are photographs of Kada Hotić, Vice President of the Movement of Mothers of the Srebrenica and Žepa Enclaves. She lost numerous family members in the genocide including her son Samir Hotić, her husband Sead Hotić, her brothers Ekrem and Naser Đilović, and her brother-in-law Naser Hotić.

“Together with the other mothers of Srebrenica, I survive and fight for the truth with which we write our history,” said Hotić. At the opening of the exhibition, she emphasized the importance of scarves and shawls worn by women around the world.

As Hotić explained, scarves are worn as fashion accessories or as protection from the elements. “For us, Muslim and Bosniak women, it is also a tradition to cover our heads when we pray, when we bury our loved ones and when we go to pay respects to the dead,” added Hotić.

The “Scarves of Remembrance” exhibition, the photobook about the life of the mothers of Srebrenica, the artistic installation “Mother’s Scarf,” and the Srebrenica Heroines international conference were organized by the Srebrenica Memorial Center, the Post-Conflict Research Center, and the Movement of the Mothers of the Srebrenica and Žepa Enclaves for the commemoration of the 27th anniversary of the Srebrenica genocide. 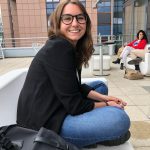 Berta holds a master’s degree in Advanced Journalism from the Blanquerna - Ramon Llull University of Barcelona and a bachelor’s degree in International Relations with specialisms in EU affairs and foreign policy from the same university. Due to her interest in the Western Balkan’s history and politics she also completed a diploma in New Scenarios in the Western Balkans and took part in a volunteering project in Slavonija. Her desire to better understand the post-war Bosnian society, as well as its political dynamics and future prospects brought her to join the PCRC in Sarajevo. Before that, she worked in the field of EU affairs and communications in Brussels and as a journalist in Barcelona.

The Center for Children, Youth and Family: Building an Active and Cohesive Community in Laktaši

The NGO Center for Children, Youth and Family in Laktaši has been working for 14 years to build a responsible and active civil society by promoting values and social cohesion in their community and offers children and their parents access to leisure activities through informal creative and recreational education.
December 17th, 2017

“Different” Banja Luka Guy on the Throne of Electronic Music

Luka Ćurguz, a 24-year-old from Banja Luka, can’t call the physical injury he was born with an advantage, but he does believe that it makes him unique and easily recognizable in his athletic accomplishments and musical career. Luka is a successful athlete and musician who wants to put his hometown of Banja Luka, and his country, on the map of electronic music.
July 1st, 2022