The Sarajevo Canton Memorial Fund and the Post-Conflict Research Center (PCRC) recently released a scientific report entitled “The Siege of Sarajevo from 1992 to 1995,” based upon the relevant court judgements. It documents the sniping and shelling of the city as well as the war crimes committed in eight municipalities, with the aim of promoting greater acceptance of judicially established facts and countering the denial of the crimes carried out against Sarajevo civilians.

Based on the facts established by these courts, the report outlines the strategic and operational activities of the military and political structures of the Republika Srpska (RS) in Sarajevo. This includes the daily sniping and shelling of the city as well as the terrorizing, wounding, and murder of its inhabitants. It also provides a detailed account of the crimes committed against Bosniaks and Croats in the municipalities of Novo Sarajevo, Novi Grad, Ilidža, Vogošća, Ilijaš, Hadžići, Trnovo, and Pale. The report concludes by identifying the war criminals convicted as of May 2022, and the two joint criminal enterprises (JCE) undertaken by Serbian military forces.

The highest-ranking political functionary, Radovan Karadžić, the president of Republika Srpska and commander-in-chief of its armed forces, was also convicted for his role in the sniping and shelling campaign and the Sarajevo municipalities occupied by Serbian military and political forces. According to the judgement against Karadžić, on August 2nd, 1995, he told the newspaper Srpski Borac:

“Before the war we were aware that if it happens it will start in Sarajevo. We decided that if we want to win we have to stay in Sarajevo. The strategic idea was to prevent the independent Bosnian state from functioning whereas, on the other hand, our state would function. […] Sarajevo is of special importance to us because of combat, strategic and tactical reasons. […] Sarajevo is, as you know it, related to our survival, to the survival of our state and I suppose that, if the Muslim entity survives in Sarajevo, Sarajevo will be a melting point of cultures […]. If the Muslims don’t accept peaceful transformation of the city into two entities Sarajevo will suffer the fate of Beirut, where working hours are until noon and gunfire in the afternoon. […] We need every inch in Serbian Sarajevo, we even claim rights on the centre of Sarajevo, say, the entire left bank of Miljacka river” (pg. 1921). 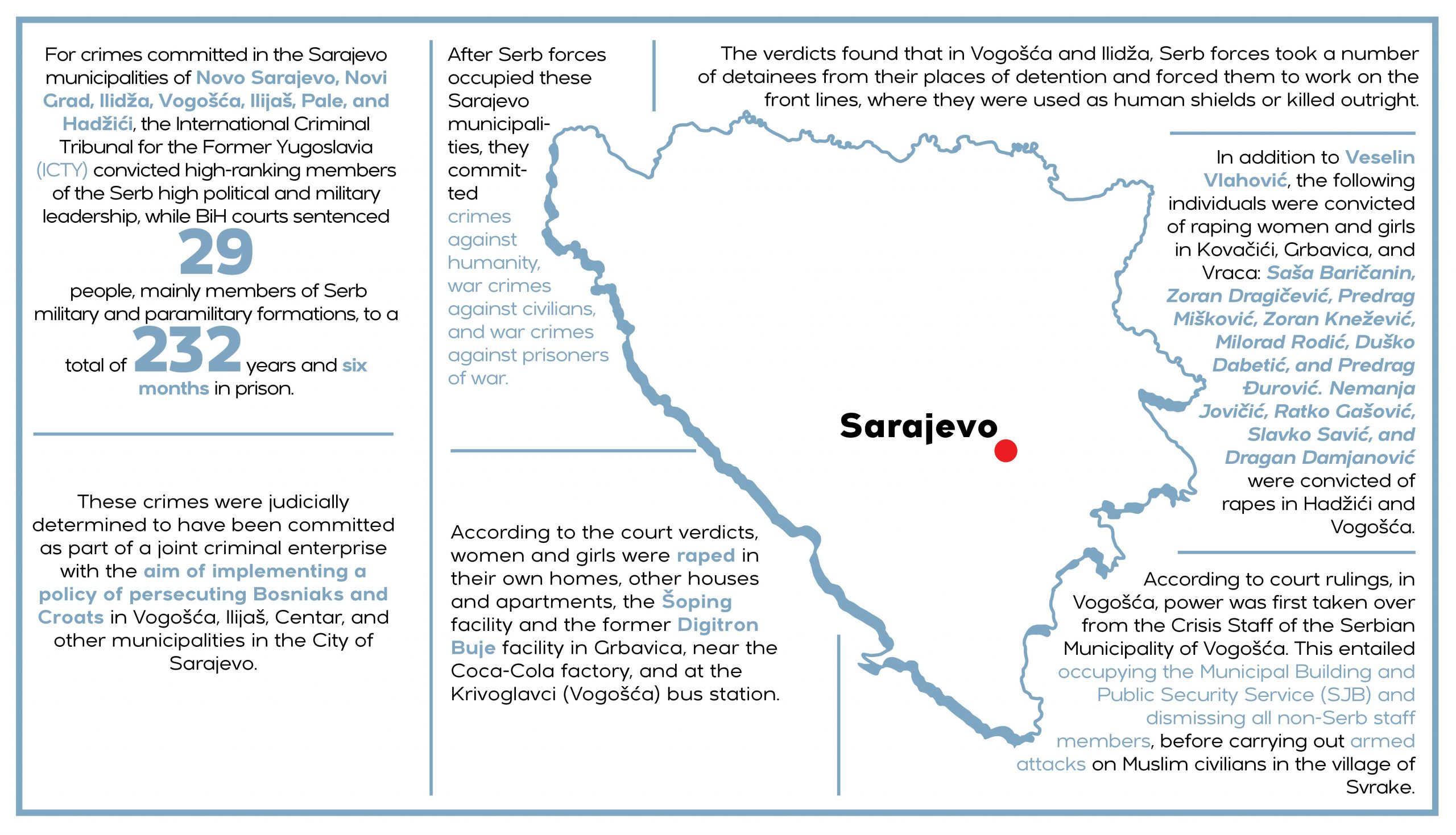 The highest-ranking military officer was Lieutenant General Ratko Mladić, commander of the Main Staff of the Army of Republika Srpska. He was also convicted of crimes in Sarajevo and for his role in the campaign of sniping and shelling. At the 16th Session of the Assembly of Bosnian Serbs on May 12th, 1992, as recounted in the judgement against him, Mladić stated:

“When we start fighting over Sarajevo, we must not say before the international public […] ‘We are going to shut down your water and power supply’ […] And we have to put a ring around the dragon’s head of Sarajevo this very moment, and only those whom we let out should be allowed out […] We should not say: we will destroy Sarajevo, we need Sarajevo. We are not going to say that we are going to destroy the power supply pylons or turn off the water supply, no, because that would get America out of its seat, but […] one day there is no water at all in Sarajevo. What is it, we do not know, damage, we should fix it, no, we will fix it, slowly. […] Therefore, we have to wisely tell the world, it was they who were shooting, hit the transmission line and the power went off, they were shooting at the water supply facilities, there was a power cut at such and such a place, we are doing our best repairing this, that is what diplomacy is” (pg. 2310).

At the report’s launch, Ahmed Kulanić, Director of the Sarajevo Canton Memorial Fund, said that this is the first in a series of publications of the Memorija project launched by the Fund

“The Memorija is a project designed to approach and try to explain the period of aggression against the Republic of Bosnia and Herzegovina from 1992 to 1995 through a hundred scientific research projects, studies, books, and publications. In the year when we mark the 30th anniversary of the beginning of the Sarajevo siege, we are launching this edition with a project about the siege,” Kulanić pointed out.

Dr. Šaćir Filandra and Dr. Amer Osmić, Peer-reviewers of the publication, highlighted the innovative graphics and the simplicity of the text, which makes verifiable facts that have been established by international courts clear and accessible to the general public.

Dr. Filandra pointed out that this publication will contribute to shaping people’s understanding of the crimes that took place in Sarajevo. In addition, he said that this work will help these facts become a constructive part of our awareness.

Dr. Osmić said that we must work to ensure that the culture of remembrance is given the place it deserves.

“It is devastating that young people don’t know what happened in the past. That’s why this publication is extremely important, primarily so that the younger generation can see in one place, chronologically and methodologically, precisely how and in what way international and domestic courts made their decisions and on what basis. It is very important to point out that the factual content presented is related to the judgments, chronologically argued, and every fact and every paragraph from this book can be checked,” added Osmić.

Anisa Sućeska, President of the Mechanism Program for Informing Communities affected by the conflict, said that this publication is unique, innovative, and the first of its kind in BiH. She presented a brief overview of the prosecution of the crimes committed during the siege of Sarajevo before the International Criminal Court for the former Yugoslavia.

Fikret Grabovica, President of the Association of Parents of Children Killed in the Siege of Sarajevo, spoke about the struggles they face as parents and the Association’s fight to ensure that the crimes against the children of Sarajevo are brought before domestic courts.

Erna Mačkić, a researcher at the Post-Conflict Research Center, said that this research report is unique in that, in a single document, it contains so much information from the Hague Tribunal which ruled that Bosnian Serb forces terrorized Sarajevo civilians and carried out a campaign of sniping and shelling which constantly endangered the lives of everyone, from infants to the elderly.

The publication is available in Bosnian and English.

Socioeconomic issues have become an increasingly important topic in transitional justice. A new research project developed in collaboration between PCRC and Royal Holloway, University of London, explores how they have been debated in the context of the Initiative for RECOM.
September 23rd, 2021