The intimacy of a family night, with an abundance of food and socializing, was interrupted by sadness of my 70-year-old grandmother. I approached her and she started telling me how, that day, she was unexpectedly visited by Rada, who she had shared an office with 10 years before the war, in a now failed company.

She told me a story about Rada and an artist named Ahmet Hundur, people, who until then were unbeknownst to me. The events surrounding war in Tešanj brought them together, and their story demonstrated bravery and perseverance to help others, no matter their ethnic belonging.

During the war Rada, who is an Orthodox Christian, decided to stay in her hometown of Tešanj with her five-member family, even though she knew that she would face resentment from her family and friends who had decided to go over to “the other side.”

Because of the war Tešanj was blockaded, so Rada went to the municipality office to ask for any kind of assistance she could get to feed her family and provide them a shelter for at least one night, since the house in which they lived was so close to the front lines.

The mayor of the municipality during that time listened to her, but before he could respond, Ahmet spoke out. Ahmet was at the mayor’s office to deliver a painting, which was to be traded for a convoy of food that would be delivered to Tešanj later.

Ahmet’s paintings were used to help get food to Tešanj even before the war. He took his paintings off the wall to provide a kilogram of flour for someone.

His paintings had a mission to feed a child or to give them candy that would elicit a smile on their frightened face.

In front of the mayor, Ahmet offered Rada accommodation in his family house, as well as food and everything her minor children needed.

Rada was in disbelief regarding this offer and explained that it could bring about problems for him. Ahmet did not care about the consequences because her name and religion were irrelevant to him. The only thing that was important was to provide a safe home for her, which he did.

As the conflict escalated, many warned Ahmet that Rada was a traitor or an informant and that he should “mind his own business.” Ahmet ignored these comments and stories, and Rada remained in the Hundur house with her family until the end of the war, after which she moved them to Germany.

Even during the most difficult period, Rada and Ahmet had good intentions and pure hearts, demolishing the boundaries of nationalism, cultural and religious differences. On this note, my grandmother ended her story. The whole family listened and the question was raised: Why did neighbors, friends and compatriots go to war against each other in the first place? Grandmother simply shrugged her shoulders.

This piece was recently awarded third place in the Post-Conflict Research Center’s “Srđan Aleksić Youth Competition,” which challenges young people in Bosnia to discover, collect, and share stories of peacebuilding, moral courage, and interethnic cooperation from their local communities, and is kindly funded by the National Endowment for Democracy. Through the competition, the center hopes to inspire youth to take an active role in the promotion of positive examples of people who are making a difference in the lives of others in Bosnia-Herzegovina. 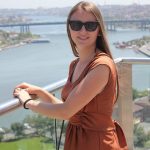 Azra Bešlagić is a Balkan Diskurs trained correspondent from Tesanj, Bosnia and Herzegovina. In 2015 she was awarded third place in the Post-Conflict Research Center’s "Srđan Aleksić" Youth Competition.

Balkan Diskurs and the Post-Conflict Research Center (PCRC) are proud to announce the start of a new research project entitled ‘’Real Voice of Journalism.’’
October 20th, 2017

In Bosnia and Herzegovina, women, especially in rural areas, have few employment opportunities. But with a few hours of training, a traditional skill can be transformed into a profession. Marion Pineau and Akvile Zakarauskaite report.
December 7th, 2015