After 32 years, a historical gem was reborn. The International Documentary Film Festival in Tuzla was restarted this year under its traditional symbolism of the Miner and the color red, which pays tribute to the blood spilled by the working class in the building of the country.

In reawakening the festival, the organizers endeavored to pull it from oblivion for the benefit of new generations of young people.

The 24th iteration of the Tuzla International Documentary Film Festival was held from the 22nd to 24th of October this year. This was the first time the Festival was held since 1990, after which it was interrupted by the war. It has always attracted big names from the film world. Five films were screened in this year’s Festival, of which “Lights of Sarajevo” [BCS: Svjetla Sarajeva], directed by Srđan Perkić, was chosen as the best documentary film.

“To get an award in a freedom-loving, multi-ethnic, multicultural city like Tuzla actually carries a special charm. To continue this tradition, where big names used to appear, is a special experience for me and a wonderful feeling that I will always carry with me,” said Srđan Perkić, winner of the Miner Award for the best documentary film.

The Miner Award is a symbol of the pre-war festival. The defiant red poster, like the miner himself, symbolizes the Festival.

“The color red represents the tradition of the Festival, as the color of the blood spilled for the country that was built by the working class. The color also represents the miners. These are definitely symbols of this city,” said Boris Balta, director of the Tuzla Film Festival.

The International Documentary Film Festival was organized for the first time in 1968 as the Workers’ Festival, and no one guessed that 1990 would be the last year they would see its colors. At that time, as Balta explained, the disintegration of Yugoslavia was already suspected. Tuzla was on the margins of political events, and the city didn’t know what awaited them.

Tuzla and its citizens were put under a blockade. Although Tuzla has been working on its own cultural trait, Balta believes that they were also marginalized because of their “local patriotism,” which is reflected in the fact that they did not have a functional cinema hall until 2012.

The fact that the Documentary Film Festival was never completely forgotten is an indication of the initiative to create a unique exhibition of newspaper articles or any media as a testimony of the existence of the Festival. There was skepticism that the idea could be realized, because at that time, there was much greater investment in theater and other art forms, as opposed to film.

Sabina Babajić, head of the Native Collection of the National and the Derviš Sušić University Library of Tuzla, said that she was skeptical about the idea of creating a unique exhibition of newspaper articles or any other media, but she nevertheless started collecting texts.

“What particularly surprised me was that the Festival was not only written about in daily periodicals from Bosnia and Herzegovina, but also in newspapers from the wider region,” said Babajić.

The archive exhibition is a reminder of the International Documentary Film Festival in was once held in Tuzla. It contains various writings, film notebooks, clippings from newspaper articles, and special monographs dedicated important directors who at that time contributed to the development and significance of the Festival itself. 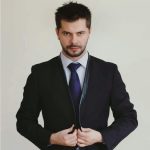 Ramo has a bachelor's degree in journalism. He is employed at RTV Slon Tuzla, and in addition, he is PR for several companies. Ramo is versatile, and is recognizable to the public as an award-winning painter. He has several solo and group exhibitions behind him. He also sings and is an active member of the BKC TK Vocal Ensemble.

January 31st marks No Tobacco Day. Launched in 1982 as a way to alert the public to the harmful effects of tobacco smoke, this day is now celebrated across the region. This year, activists from the “Klima Bez Dima” (“Environment Without Smoke”) initiative decided to organize an action in Mostar to commemorate the occasion.
February 1st, 2019

The US Must Protect Eastern Europe from Moscow

An unstable and internally broken Europe, with border integrity under constant threat by a belligerent Russia, would prove detrimental to United States foreign policy, and would likely set back the progress made by all U.S. presidents since Ronald Reagan.
February 7th, 2017