Nedim Ramić, a 21-year-old from Sanski Most in Bosnia and Herzegovina (BiH), did not sit back and wait for someone to help him make his childhood dream of becoming a hairdresser come true. During the pandemic, he started working in clients’ houses or yards, sometimes without pay, which helped him become successful in his business today.

During the COVID-19 pandemic, Nedim made a Facebook post saying that he wanted to cut and style hair at clients’ homes because as a minor, he couldn’t get a job at a hair salon. The price of a haircut was 5 Bosnian marks (2.5 euros), but for those who were unable to pay, it was free. His Facebook post received attention and as people started sharing it, the word spread.

Cutting hair during pandemic helped Nedim achieve his childhood dream. As he explains, when he went to the hairdresser as a boy, he watched how it was done and simply became interested in it. Later on, he started studying hairdressing at a multi-disciplinary secondary school.

“I started cutting my friends’ hair and I liked it. After a while, I consulted with them and decided to start cutting hair at people’s homes to gain experience,” recalls Nedim.

He also went to several trainings and seminars for barbers, where he gained additional experience and improved his skills. He earned money by giving haircuts at people’s homes, until, with the encouragement and help of his friends and family, he opened a hair salon in Sanski Most.

“I found a space in Sanski Most and started arranging it. It was difficult, but it paid off,” Nedim notes. He adds that he’s proud to have opened a hair salon at the age of 18 and to have made it to where he is now.

He’s aware that he can always do better, so he emphasizes that he “will never stop trying to be more successful.” At the same time, he also tries to help those who are in need. He has already participated in two humanitarian drives where the money earned during a certain period was donated to help the sick.

He says that he enjoys helping people and plans to take part in other humanitarian activities, adding that even so much as a smile can improve someone’s day. “Smiling is free, people,” adds Nedim.

On the problem of youth unemployment in Bosnia and Herzegovina, Nedim describes the situation for the population between the ages of 15 and 24 as alarming.

“The biggest problem for young people in BiH is that, unfortunately, they don’t see their future here, starting from the fact that it is difficult to find a job to the fact that when they do find a job, the wages are very low. Naturally, this forces them to leave BiH. I don’t plan to leave Bosnia because I want to stay and fight. In the future, I see myself as one of the more successful male hairdressers,” says Nedim.

Being a hairdresser is great for Nedim because he always has the opportunity to meet new people, hang out with them, joke around, and make their hair beautiful. “Isn’t that nice? I find it nice,” he muses.

Nedim advises young people in Bosnia and Herzegovina to follow their dreams and work towards their goals. “Everything we imagine, we can achieve with work and effort,” Nedim says.

This article is part of a series of texts within the #EmployMe project of the Post-Conflict Research Center and Balkan Diskurs. The series aims to raise awareness about the problems that young people face in the field of education and employment in BiH and highlight some good practices in battling these obstacles. This series is part of the “Youth Retention Program in BiH – Opšta Mobilizacija,” implemented by the Nešto Više Association and PRONI Center for Youth Development, with support from the Delegation of the European Union to BiH. 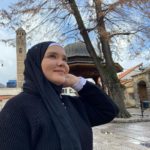 Dženisa Joldić is a trained Balkan Diskurs correspondent from Sarajevo. She was born on June 11, 1999. At the age of 12, she published her first collection of poems, "Sunčani zagrljaj". She is currently a third-year student at the Faculty of Political Sciences in Sarajevo, Department of Communication and Journalism. She likes to express herself creatively through writing and photography.

Gender-based violence is receiving more and more media coverage in Bosnia-Herzegovina. However, the basic principles of ethical journalism are often violated for the sake of  publishing more sensational content, which often results in the re-traumatization of victims and their families.
February 4th, 2022

Artist Hanna Dujmović: With a lot of hard work, every goal is achievable

Hanna Dumović is an academic sculptor, who describes herself as an imaginative, ambitious and unusual girl who lives her dreams. Unlike many of her peers, Hanna did not wait for the change to happen on its own after graduation, but actively worked on achieving her goals.
September 10th, 2021