So who is Božo Vrećo? Who better to ask than the man himself?

Bosnia and Herzegovina as a country and the Balkans in general have often been described as patriarchal, verging on male chauvinist. So for someone embracing both feminine and masculine traits to reach the height of success in Bosnia’s music industry of Bosnia is an incredible achievement.

So who is Božo Vrećo? Who better to ask than the man himself?

“I stand for freedom – to be what you want to be, say what you want to say, and dress how you want to dress. Božo Vrećo is always about love – I live for my art and everything in my life is dedicated to my work. That is my life and that is me.” It is perhaps easier said than done, considering the prejudice he has had to challenge.

“This society is completely backward, self-conscious. Primitive and reserved. It despises differences, condemns those that are different, and does not support emotions or love. If you are not like other people, they want to harm you, verbally and physically. Freedom for people such as myself in Bosnia is a risk.” But in some sense, these negative experiences are also at the heart of the genre of music that he adores – Sevdah. It’s a genre of music conceived from tragedy and loss in one’s own life. Something which is, to some degree, relatable to everyone regardless of their ethnicity, religion or indeed, gender. Considering the history of the Balkans, tragedy and loss are perhaps felt on a deeper level here.

”Throughout history, we have experienced all possible tortures and wars, all of which left traces somewhere, and through our tradition and customs and by being separated from people dear to us. All of this has affected the way that sevdah is now performed – as the common creation of all the peoples who have existed on Bosnian soil or in the Balkans.”

Božo, however, emphasizes the importance of love in his music. He says his mother and sister have played an essential role in his success.

“Everything comes from the family – the upbringing of a child is crucial, it’s the support and the love for everything that comes later. I was lucky that my mother and sister always accepted me as I was. My mum would say, I gave you birth as you are, and society has nothing to do with it.

“My muse is my mother and I always dedicate everything I create in music, writing, fashion or painting to her; everything is created through a love for her and my gratitude for everything.”

Sevdah is a musical genre that thrives on contrast and contradiction. On the one hand, it invokes feelings of tragedy, injustice and heartbreak. On the other, in the words of Božo himself, Sevdah is first and foremost about love. To truly experience love we need to also feel hate, scorn, and tragedy. Just as Božo is brutally honest about his own identity and his emotions, so is Sevdah completely honest in its message. His very identity seems to be formed on the contrast between male and female. Only he would not describe his identity as one of dualism, but rather one of harmony between these two “opposites”.

The best artists reveal their emotions in their most naked form. And they leave themselves vulnerable to their audience, just as Božo did during a 2015 concert: he first performed in clothes traditional for a man, and afterward came out dressed in women’s clothing. The audience applauded his courageous honesty and vulnerability.

In his advice to the young people struggling to find their path, Božo Vrećo stresses the importance of staying true to yourself, staying focused on your goals and being patient in achieving them.

He quotes Dostoevsky: “If you look at the dogs barking as you walk down the street, you will never reach your goal.” 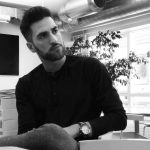 Kashif is from Denmark and holds a Bachelors degree in International Studies and Social Sciences, as well as a Masters in International Security and Law. He has co-founded and organization called Freedom Movements which aims to improve the conditions refugees are faced with in Denmark by acting as a catalyst for refugees to empower their own voices.

“Anywhere from 25,000 all the way to 100,000 have been reported to have emigrated since last fall. Why are all these people desperate to flee the country that only years ago they ached to see free?”
June 2nd, 2015

Premiere of the film „Kapija ’95“ at the Srebrenica Memorial Center