In Bugojno, a town in central Bosnia, war-time divisions remain strong even twenty-five years after the war. Although it is not an administratively divided city, Bosniaks and Croats live almost completely separate lives. Schools are divided, but also catering facilities. Everyone knows exactly who can come in and who cannot.

The only thing shared in common is young people who demand change. Among them are Andrea Pocrnja and Mahira Herić, young activists who graduated from high school this year.

“I do not hesitate to meet other nationalities and go out to places where I feel comfortable. I get along great with them. Sometimes the system in Bugojno bothers me, and even though I do not see it as an obstacle in my life, the community could still provide much better opportunities than it does now. I finished high school and I plan to leave Bugojno,” says Andrea, who believes that young people are the bearers of positive change.

Andrea’s peer Mahira often thinks about the “division” of Bugojno, although she has never felt uncomfortable in the company of people who are not of her nationality.

“However, as I heard in the stories around me, especially in the story of my parents, they felt discomfort after the war in BiH. And I think that not only Bosniaks felt it, but also people of Croatian nationality. My attitude towards that is that I simply do not look at anyone differently, regardless of my nationality, and I try to be accepting of everyone,” explains Mahira.

She recalls attending protests in Travnik three years ago over the “two schools under one roof” policy. She was, as she says, proud of herself at the time. She also went to a segregated school and believes that this kind of education is completely wrong.

Since the end of the war, Bosnia and Herzegovina has had a “two schools under one roof” policy, in which children of Croat and Bosniak nationality in 13 cities in the Federation of BiH attend classes separately in the same building. They study under two different curricula, one “Croatian” and one “Bosnian.”

In 2014, the Supreme Court of the Federation of BiH ruled that the “two schools under one roof” policy allows for the ethnic segregation of students and that such practices must be abolished. But they have yet to be changed.

A 2018 report of the OSCE Mission to Bosnia and Herzegovina found that although the characteristics of the ‘‘two schools under one roof’’ program differ from case to case, all such schools segregate children and teach them through this segregation that there are insurmountable differences between the nationalities.

“I have friends and acquaintances of another ethnicity and they are part of my life and my society. I don’t hold back anything. I normally go out to the cafes I want, no matter who goes there. I don’t think nationality should matter and that youth should work together and try to suppress all stereotypes,” says Mahira.

She believes that young people in Bugojno are suffering due to the lack of job opportunities. She tells young people that the future will not be any better if they do not start taking initiative, including ending stereotypes.

“I do not perceive Bugojno as a divided city. The situation is much better now than it was fifteen years ago. I think a lot of young people gather in the same cafes and other spaces, which was unlikely to happen fifteen years ago,” he says.

Adis emphasizes that the Youth Center has a saying that reads, “It is not WE and THEY who exist here, but young people,” and that everyone there is trying to drive away national prejudices.

“All the activities organized by the International Organization for Migration in the past two years have welcomed everyone. There was resistance at first. I remember that the former principal from Uskoplje High School, which has two classes at Bugojno Mixed High School, was against joint activities. But with the arrival of the new principal, that changed,” says Adis, adding that he did not notice any national or religious intimidation.

He believes that Bosnia and Herzegovina need changes, but ones that will make people more aware, so that they do not just wait for things to change.

“I hope the old people won’t hold a grudge against me, but when one generation of old, nationalistically-oriented people disappears, I think there will be a general change,” concluded Adis. 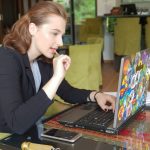 Sajra is a Balkan Diskurs trained correspondent from Bugojno. She is a high school student with an interest in activism and volunteering. Sajra's ultimate professional goal is to become an ambassador of Bosnia and Herzegovina.

The Stories and Places I Always Go Back To

It seems that I am not able to resist going back to the ruined places of my childhood. They are there to break me, to shake me; they are a part of my identity. After all, they are here only to come to life again.
March 5th, 2019